There is no escaping the beauty of simple and strong composition of Amr Abdullah Dalsh’s picture. The tiny, silhouetted figures are dwarfed in front of the symmetrical structure, the strong light seems to dazzle, and makes me want to blink. It grabs you like a scene from an epic Spielberg film. 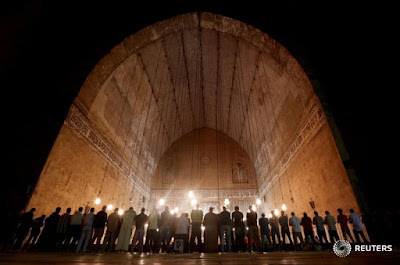 I admit it is a slightly bizarre choice to include Siphiwe Sibeko’s picture of cabbages being farmed. But take a minute to really look. Although the cabbages are bagged up it at first appears that the man sitting on top of the cabbages is perilously high on his unstable seat, what could possible go wrong? Next, I love the complementary reds and greens that vie for attention as they drive your eye around this picture. You quickly end up looking at the sign. The designer started off boldly only to discover, probably around the letter ‘T’, that if they carried on as they’d started they would not be able to fit the word ‘property’ into the sign. Lastly, is that a G or an upside down 5? This picture is being used to illustrate the complex story of a legal test of the constitution on land expropriation which you can read here 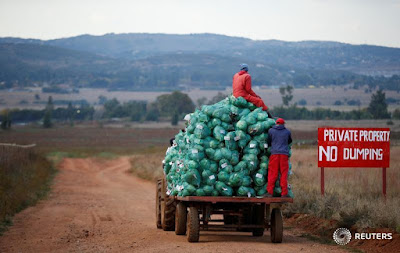 Farm workers harvest cabbages at a farm in Eikenhof, near Johannesburg, South Africa, May 21, 2018.   REUTERS/Siphiwe Sibeko

Omar Sanadiki’s beautifully lit picture seems to deliver mixed messages. You feel the pleasant warmth of the sun on the man’s face as he poses for a picture showing the V for victory sign with his hand. But his face is expressionless, cold, his mouth and eyes say nothing, and his hand is dirty with ash and grime, as are all his clothes. He sits in an environment of total destruction. Although we can never be certain what he is thinking I can guess that it is not thoughts of triumph. 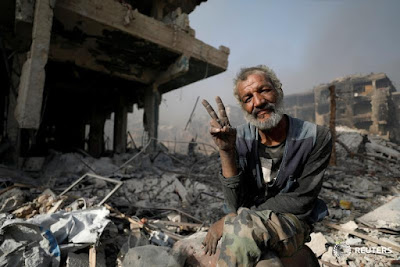 A man gestures as he sits on the rubble of damaged buildings in al-Hajar al-Aswad, Syria May 21, 2018.   REUTERS/Omar Sanadiki

Omar Sanadiki’s picture of people moving through the rubble of destroyed buildings is not so different from Amr’s picture of the faithful at the mosque, at least in its visual structure. People are dwarfed in a landscape, and even though one image is taken at night and the other by day, the colours are similar. If you rotate one of the images through 180 degrees you will find the same the strong compositional U shape. All that aside, Omar’s image is one of relentless destruction, the figures leading you from the foreground to as far away as the eye can see. More pictures here . 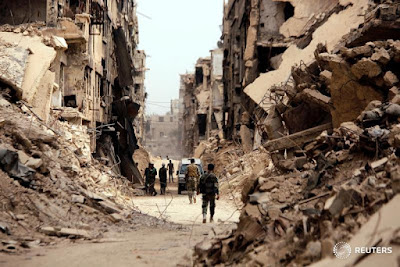 I am amazed at the order of Khaled Abdullah’s zigzag picture, not only in terms of its visual composition, but by the order of the people waiting in line for food handouts. They must be hungry, hot, a little frightened and no doubt tired. I have also chosen a second image from the same scene, as I was struck how this large line of people made such an impact on the landscape, and that so many are in need of help. The order, in both senses in Khaled’s powerful pictures, highlights to me the scale of the problem these people are facing. 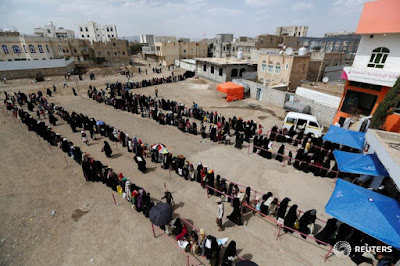 Women and girls queue outside a charity food distribution centre to get the iftar meal during the holy month of Ramadan in Sanaa, Yemen, May 22, 2018.   REUTERS/Khaled Abdullah 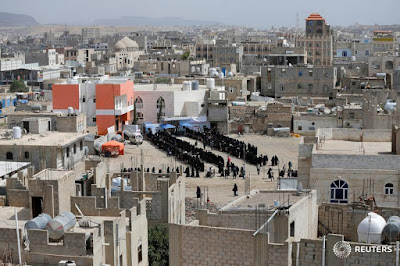 Women and girls queue outside a charity food distribution centre to get the iftar meal during the holy month of Ramadan in Sanaa, Yemen, May 22, 2018.   REUTERS/Khaled Abdullah

The question that pops into my mind when looking at Essam al-Sudani’s picture is how can anything actually live in these conditions and why, as an investor, would you bet money on its survival? On the face of it nothing could grow. A yellow sandstorm as far as the eye can see is only punctuated by wind battered saplings as if in a scene plucked from a post-apocalyptic science fiction film. Maybe this is why I am not a successful investor? 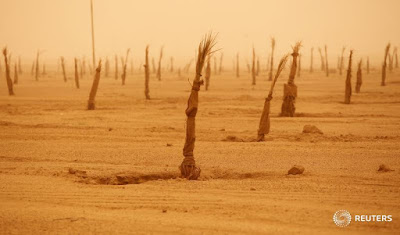 Palm trees belonging to Kuwaiti investor Abdul-Aziz al-Babtain are seen near the port city of Basra, Iraq May 11, 2018.   REUTERS/Essam al-Sudani

Amr Abdullah Dalsh’s picture is, it must be said, a bit of a cliché, but one I kept coming back to. It’s fun, and it has caaptured a good moment. I do wish there was no water across the boy’s face, but I do like his scrunched up features and the ‘crown’ of water. So here it is, I hope you enjoy a quiet smile, like me. 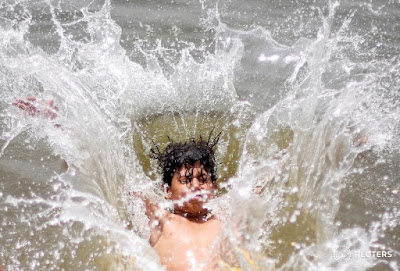 An Egyptian boy jumps into the water to cool off in hot and humid weather during the holy fasting month of Ramadan in Cairo, Egypt May 23, 2018.   REUTERS/Amr Abdullah Dalsh