'Oi Mate! Take my Picture!' And the perils of running out of film

‘Oi Mate! Take my picture. I might look younger on that old camera!’ Was the shout that greeted me from across the street as I walked back from the Lea Bridge Road.

‘I can’t’ I replied ‘I’ve run out of film’. My heart sank, a missed opportunity. I had promised myself that I’d photograph everyone who chatted with me or showed any sort of interest in my project documenting the Lea Bridge Road.

I had stumbled across something that had not troubled me for years, running out of film. Shooting on digital you never run out, unless of course you shoot pictures like a rear gunner under attack. I have edited such photographers, scrolling through literally thousands of images, but that’s another story. 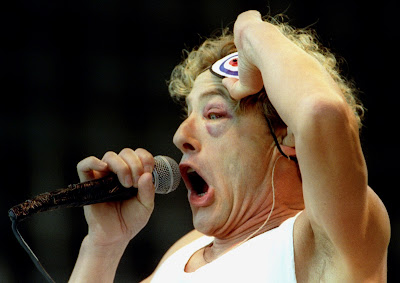 Roger Daltry, lead singer with The Who, lifts his eye patch to reveal his damaged left eye to the audience at the Prince's Trust Masters of Rock concert in Hyde Park, June 29, 1996. The eye patch, used after he was accidentally hit by Gary Glitter's microphone stand during rehearsals, was decorated with the blue and red bullseye symbol.

Thinking back to my film days shooting news I remember the day that I decided I would always spin out a roll of 35mm when I got to frame 32 or 33. It was June 29, 1996. The picture above of Roger Daltry was taken on frame 36, shot on a 300mm lens. I had one frame and wasn’t sure if I had missed the moment or shot it out of focus. I got lucky as it’s perfect.

From that day on my rule would be that I’d either leave three or four frames on the roll or I’d put a new film in, immediately. After all you never knew what was going to happen.

Fast forward 25 years, I had broken my own rule while shooting on the Lea Bridge Road so I’d missed getting a picture of building material depot worker ‘Oi Mate!’. As I am presently using a Rolleiflex I only get 12 frames per roll of film, so something else for me to work out on my journey.

The picture below of Anthony Benson is an example of what I had missed out on. A simple full-length portrait with a busy background. A gentle way into the community. I make sure that I give prints to everyone I photograph. 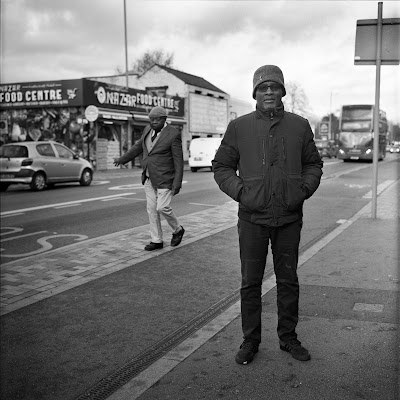 A man hails a bus as Anthony Bensong walks to work on the Lea Bridge Road, London, November 26, 2021.

I know it’s a bit of a cliché but I am quite happy with my picture of Murad, a barber shot through the steamed-up window of his shop, Imza Traditional Turkish Barbers. I was careful to ensure that my reflection was not seen in the face of the customer as that would destroy the image. 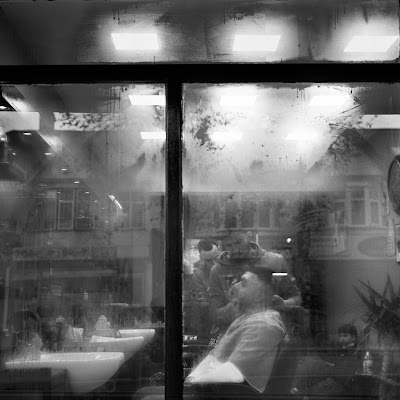 I am increasingly pleased that my picture taking confidence is growing. I was able to take my time looking down onto the view finder and then up into a launderette as this scene of everyday domestic ordinariness unfolded. I had to wait until all three figures could be seen before I took my picture. I always wonder just how long launderettes will continue to exist? 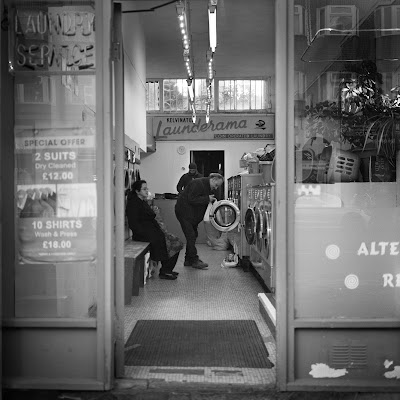 I am slightly struggling with the knowledge that the buildings are equally as important as the people as I document on the Lea Bridge Road. The visual conflict being if you shoot an image composed around the shape and structure of a building the people appear small. I tend to want to photograph people. This of course can be countered by using wide angle lens, but I am using a 75mm lens (41mm for this of you who think in 35mm terms). I've set myself this restraint to give the pictures, when seen as a sequence, a sense of continuity.

As part of this thinking I am trying to avoid shooting pictures from across the street but could not resist this as I spotted a woman who’d paused to concentrate on her phone while taking a long draw on a cigarette. What I would have given for her to stop a few inches earlier so the door framed her. 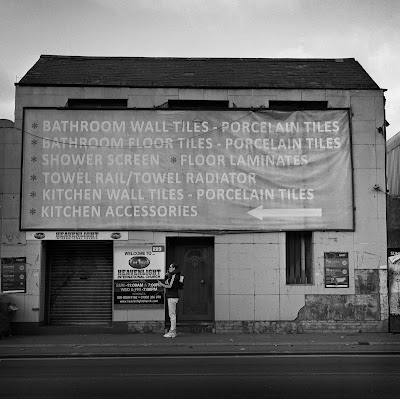 A woman takes a long draw on a cigarette as she pauses on the Lea Bridge Road, London, to look at her phone November 26, 2021.

A detail picture can draw the eye to something that is easily missed. One can only admire the confidence of the car salesman that would allow such a large deposit of bird shit on their wares. 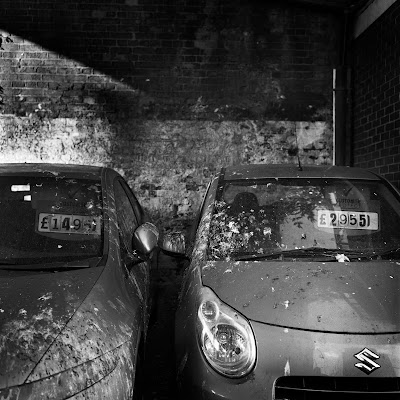 Cars for sale are covered in bird shit under the Bakers Arms rail bridge on the Lea Bridge Road in London December 4, 2021.

Finally, to share my visual learning journey I thought that I’d include the contact sheets from the Lea Bridge Road as my project progresses. I've been trying to work out timing in terms of firing the shutter and also experimenting with the depth of field. What is most rewarding with the TLR is that you see what you get as long as your are careful not to run out film. 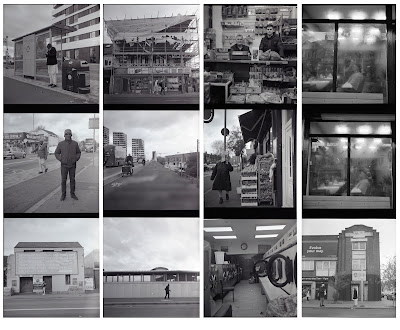 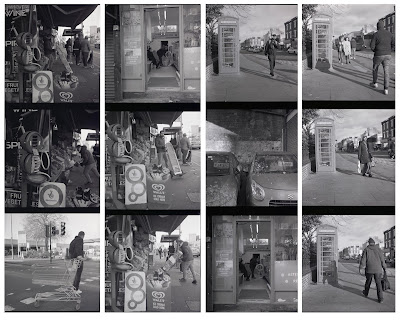 Stay safe out there. Russell