It’s not often a government leader turns up in a country and disembarks from the aircraft
alone, but Afolabi Sotunde took full advantage of Theresa May’s arrival to Nigeria to
make this wonderfully graphic picture. The horizontal and diagonal lines, triangles and
curves lead us all over this picture until we settle on the warm tones of May’s mustard-
coloured jacket among the cool and calm of the greys and blues. Really quite wonderful. 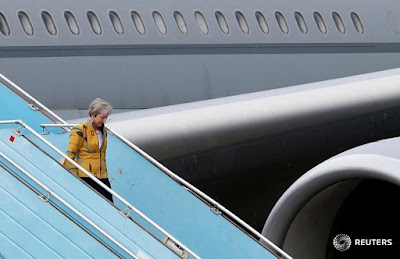 
I am drawn to Mohamad Torokman’s picture because it makes me want to know exactly what happens next. The sound grenade is just far enough in the air so that it’s clearly visible yet close enough to the policeman that it’s obvious it’s being thrown. The man in white has raised his stick, but we are not sure if it will be brought down on the policeman or, as we are told in the caption, used to gesticulate towards him. What is also very striking is that both protagonists in the image are dressed in complete tonal opposites, one all dark, one all light. 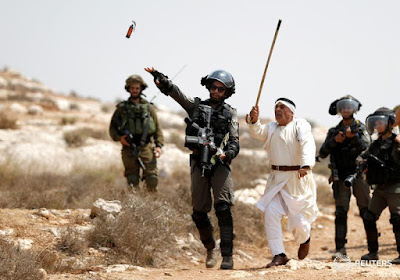 A Palestinian demonstrator gestures as an Israeli border police officer throws a sound grenade during a protest against Israeli settlement, in the village of Ras Karker, near Ramallah in the occupied West bank August 31, 2018.   REUTERS/Mohamad Torokman

A simple detail picture from Ronen Zvulun of people’s notes and prayers that have been cleared from the Western Wall somewhat saddens me and puts me in mind of the W.B Yeats poem ‘The Cloths of Heaven' . Notes of hope and prayers that would have been written and tucked so carefully by the authors are now scattered under the feet of man cleaning them out. 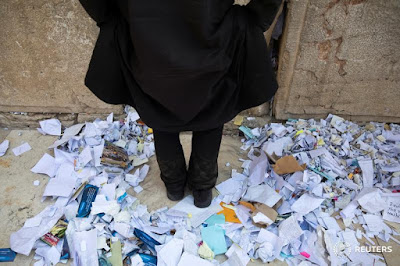 A worker removes notes from cracks at the Western Wall in Jerusalem’s Old City, as customary ahead of the Jewish New Year, August 28, 2018.   REUTERS/Ronen Zvulun

As confusing in terms of focal point as any image can be, Naif Rahma’s picture works and I am not sure why because it should not. The first half of the image is empty dusty space of nondescript colour, and the slope of the hills gives an uneasy tilt to the image. Your eye wants to settle on the face of the man with the dark blue headdress, but the bright turquoise headdress in the foreground gets in the way as you try to study his features. Your eye then wanders off into the distance, looking for a focal point; unrewarded it returns to the foreground, and there it is, the focal sense of the picture, a battered black rifle being held aloft that serves to unsettle the viewer more. 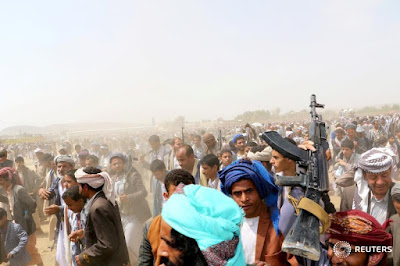 On seeing this picture by James Oatway you just have to find out what is happening. That to me is a key element of a great news picture – you need to know more and by looking at it longer, often with text, you find out. The action is set against the clean steel background and slowly the pale blue word ELECTRICAL comes into sight. But you have to work hard against the visual pull of the red and yellow cap. Is it an accident? Is someone trapped? Read the caption. 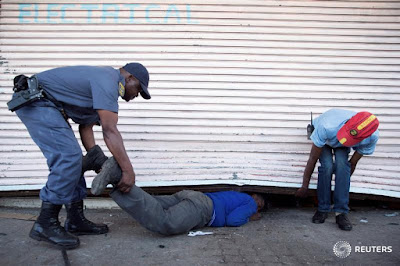 Police detain a school pupil for looting, where foreign shop owners were attacked and at least two killed, in the South Africa township of Soweto, South Africa August 29, 2018.   REUTERS/James Oatway


Against a backdrop of bright cartoon pictures, children line up on the first day of term at a school in Gaza. The graduation from light tones to dark, from top to bottom, past the nervous faces of the schoolgirls, gives this picture strength and a feeling of trepidation. Their solemn faces invite the question: what does the future hold for these children? 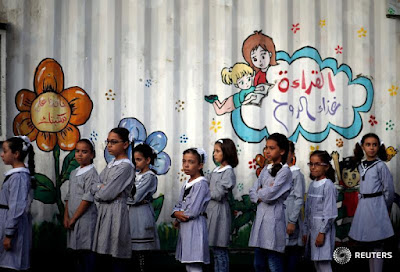 Palestinian schoolgirls queue at an UNRWA-run school on the first day of a new school year in Gaza City, August 29, 2018.   REUTERS/Mohammed Salem