A Week in Pictures Middle East and Africa March 8, 2019

I wanted to share Baz Ratner's wonderful cameo portrait in yesterday's initial edit but as the selection was quite large I decided to exclude it. Having slept on this decision I have changed my mind. The colours and the strong shape of her profile had actually haunted my dreams. Not much I can add as the simplistic beauty of this portrait speaks for itself, except I would have loved a slight crop on the left to remove mark in the background. You can see the full story here 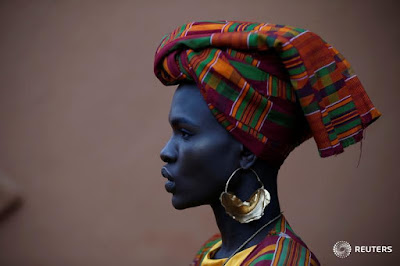 Kenyan model Aiuma Nassanyana waits behind the scenes before the fashion show showcasing African fashion and culture during a gala to launch the book 'African Twilight: The Vanishing Rituals and Ceremonies of the African Continent' at the African Heritage House in Nairobi, Kenya March 3, 2019.   REUTERS/Baz Ratner

It would be wrong for me to include only one image from Rodi Said, who is in Syria near Baghouz waiting for the last Islamic State enclave to fall, so I’ve chosen three. In the first image it’s the catchlight of the warm late sunlight above the shadows that highlights the look on the boy’s face as he looks out from the shelter of the queue of women. No matter how hard you look he is giving none of his thoughts away. Maybe that’s a good thing for us but a bad thing for him as who knows what this child has witnessed. Latest here 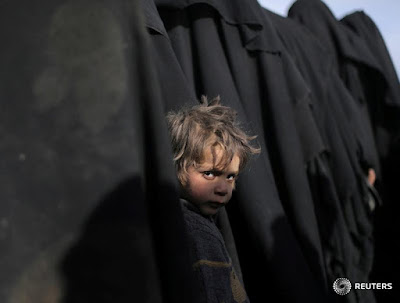 A boy looks out from a queue of waiting women near Baghouz, Deir Al Zor Province, Syria, March 5, 2019.   REUTERS/Rodi Said

Not the most beautiful image I have selected but  certainly one of the most subtly poignant. The focus of the image is created by the clever crop of the truck that leads the viewer’s eye straight to the children in the back of the speeding vehicle. Their gaze takes to you the line of people in the mid distance. The captions reveals that the recently freed are now looking across at their former captors,  who are now prisoners themselves. 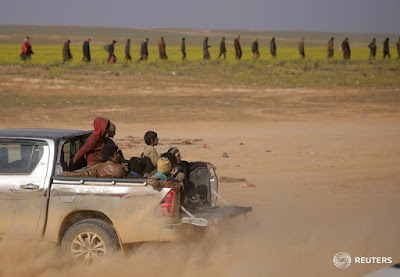 Children from the Yazidi community, who were recently freed after being captured by Islamic State fighters, ride on the back of a truck near Baghouz, Deir Al Zor province, Syria, March 6, 2019.    REUTERS/Rodi Said

It takes a little for you sort out what is going on in Rodi’s picture as your eye darts from pile to pile of scattered clothing and blankets. You finally notice the grey hood of child sitting looking at the makeshift bed. It’s only then you see the child with the pink hat leaning on their mother. Once in the core of this image you cannot draw away. 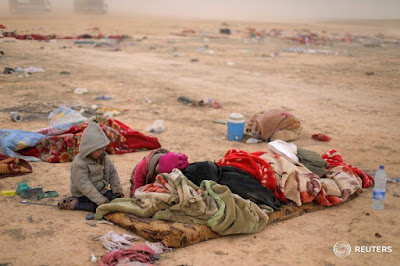 Children sit next to their injured mother near the village of Baghouz, Deir Al Zor province in Syria March 7, 2019.   REUTERS/Rodi Said

Who has not, as child, thrown food up into the air to catch it in your mouth? And sometimes the game is extended to throwing sweets and food for others to catch in their mouth, the simple joy of a “catch” more than a little pleasing. It is this basic sense of joy that draws me to Samar Abo Elouf’s picture from Gaza, captured perfectly in environmental portrait style, hands throwing up nuts, eyes focussed and mouths wide open. To see the full story if girls living in Gaza click here. 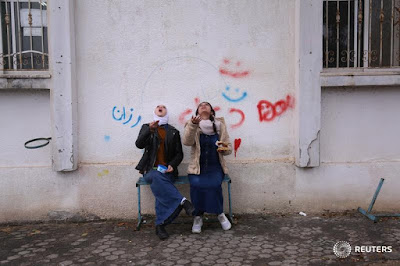 Fatma Youssef, 17, a Palestinian high school student and horse rider and her friend catch nuts in their mouths at their school in Gaza City, February 7, 2019. REUTERS/Samar Abo Elouf

A simple portrait beautifully shot by Hayam Adel using the strong window daylight to sidelight his subject and the warm tungsten lighting of the lamp to give the background a warm glow. Crossed curves of light used to their best effect.  You can see the whole story about global maternity leave here. 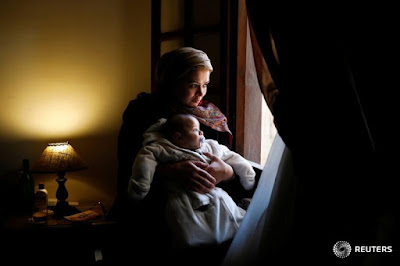 Nahla Mohamed Abdel Rahman, 37, a professor at faculty of applied arts, hold her three-month-old baby Younis, at their house after her first week back at work, in Cairo, Egypt, February 22, 2019.   REUTERS/Hayam Adel

The composition of Khalid al-Mouslily’s picture zooms you at speed along the muddy and battle-damaged street to the vanishing point on the distant horizon, not a yard of this journey untouched by the conflict. When you return to the foreground of the image you see the three lonely figures walking through this barren cityscape, trying to pull their lives back together. 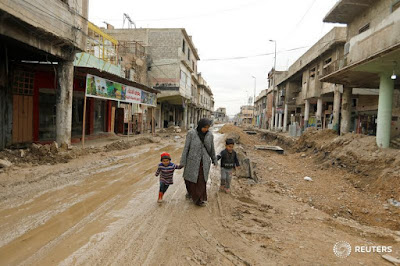 Marwa Khalid, 28, walks with her children, Mustafa and Muhaymen, in the old city of Mosul, Iraq March 3, 2019.   REUTERS/Khalid al-Mouslily

Although the march was attended by hundreds of people I like this single act of defiance in Zohra Bensemra’s picture. It’s not clear if this woman is taking pictures of herself within the demonstration or whether she is shooting pictures of the demonstration itself, but she looks determined and powerful even though the perspective of the image dwarfs her against the riot policeman. Her action of shooting pictures with her phone is clearly defined against the clean background, making it the focal point of the image. This clarity of shape contrasts with the confusion of the busy reflections in the riot shield in the foreground. 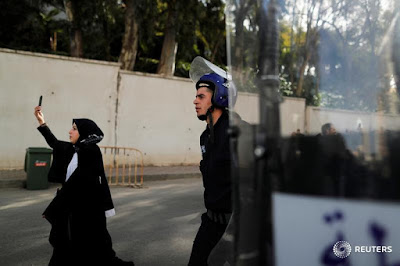 A lawyer holds up her mobile phone near a police member as she marches with others to the constitutional council during a protest to denounce an offer by President Bouteflika to run in elections next month but not to serve a full term if re-elected, in Algiers, Algeria March 7, 2019.  REUTERS/Zohra Bensemra

A regular line of blue helmets and black uniforms cut through a crowd of protesters cutting the image in half, a perfect illustration of the saying “thin blue line” – the separation between order and disorder - in Ramzi Boudina’s picture. I can’t help feeling a sense of unease when looking at it. I am not experienced in crowd control but I would have thought that for effective policing, ideally a police line should not be completely surrounded, no matter how peaceful the crowd? 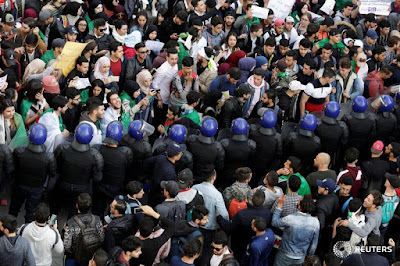 Students take part in a protest to denounce an offer by President Bouteflika to run in elections next month but not to serve a full term if re-elected, in Algiers, Algeria March 7, 2019.  REUTERS/Ramzi Boudina

I am a great fan of detail pictures that tease you and draw you into a story and make you want to know more. Raneen Sawafta’s will be a pull for anyone interested in film; not only because it’s almost a sin for film to be on the floor in the grit and dirt and will send a shudder down the spine of most, but because once you have got over the initial shock of this, you will want to know more about the green ticket. You can find out here 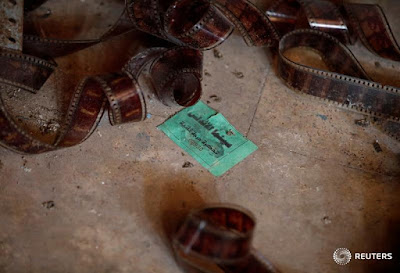 Film strips and a ticket ae seen on the ground in a former cinema in Tulkarm in the Israeli-occupied West Bank February 24, 2019.    REUTERS/Raneen Sawafta

And really there is no other reason for adding Amir Cohen’s image to the week’s selection than that it’s a moment of simple joy captured in a perfect balance of light and intrigue. When was the last time you did a headstand when taking your dog out for a walk? And imagine the odds of doing that and having it captured by an international photographer of Amir’s calibre. 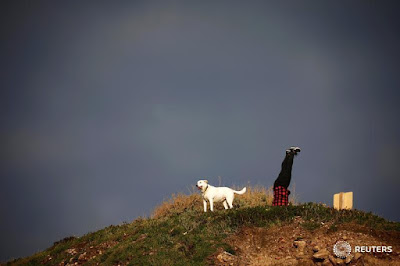 A woman does a headstand along the shore of the Mediterranean Sea in Ashkelon, Israel March 2, 2019.    REUTERS/Amir Cohen

And lastly, our talented and cherished colleague Yannis Behrakis died last week after a year-long battle with cancer. What he has left is an amazing legacy of powerful news pictures that can be seen here 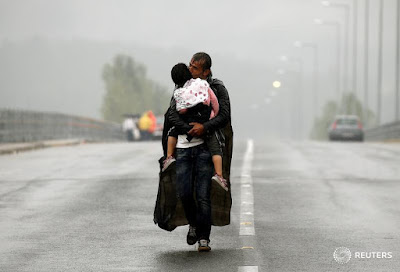 A Syrian refugee kisses his daughter as he walks through a rainstorm towards Greece’s border with Macedonia near the Greek village of Idomeni September 10, 2015.   REUTERS/Yannis Behrakis