Wham! Siphiwe Sibeko’s picture hits you as hard as the downdraft from the helicopter rotor blades. The boys explode past you as if the starting gun has just fired for a 100-metre Olympic sprint. Arms, legs, faces, in the frame, out the frame, in highlight or in shadow all rush past you over the flattened grass. One small point: I’d like to see a little movement in the rotor blades, but then maybe we’d lose sharpness in the running boys. See more of the story here 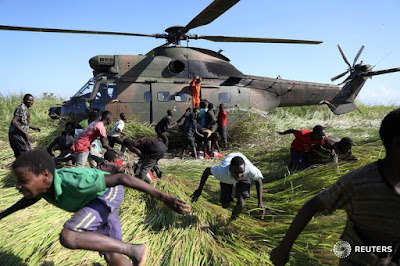 After the pictures of the huge impact of Cyclone Idai on the landscape and infrastructure and the rescue stories come the sad personal stories of death. Philimon Bulawayo’s picture of a man using his bare hands to dig in the mud to find missing relatives is as powerful as it is haunting with its close-up detail of the tragic task. 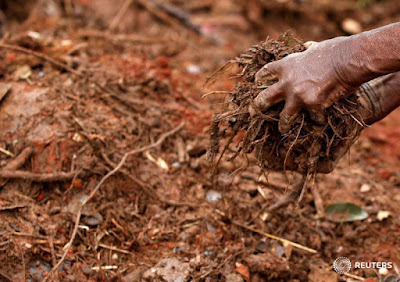 Relatives use bare hands to dig in the mud as they search for their missing loved ones in the debris and rubble left in the aftermath of Cyclone Idai in Chianimani, Zimbabwe, March 23, 2019.   REUTERS/Philimon Bulawayo

Equally powerful are images of “calm after the storm” as a survivor tries to get on with daily life with ruin all around.  Blue skies appear through storm clouds and the trees in Mike Hutchings’ picture seem to bow to embrace the boy as he walks through the flood waters. The twisted corrugated iron half submerged in water, aided by shadow from the trees, pick out the small, solitary figure making his way through the devastated landscape. More from Mozambique here 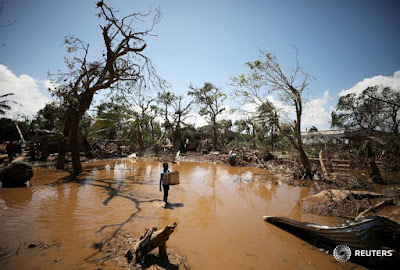 A child walks past debris as flood waters begin to recede in the aftermath of Cyclone Idai, in Buzi, near Beira, Mozambique, March 24, 2019.   REUTERS/Mike Hutchings


After the devastating plane crash story from Ethiopia it’s great to see such an affectionate and warm image by Tiksa Negeri, on the return of a historic relic from Britain. The pride in the ex-soldier’s stance and face and the sense of joy in the dancers is overwhelming. It takes a while to notice the stark background of the room as you are led visually from the proud former soldier to the dancer on the left and then through to dancer in shorts and sandals to the musician in the background. Its only then you notice the sheen and glare in the varnished wood surfaces 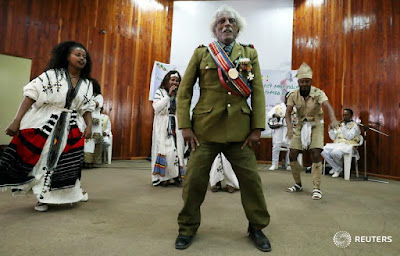 An Ethiopian army veteran dances during the welcoming ceremony of the two locks of hair of Emperor Tewodros II as it is repatriated from Britain’s national Army museum in Addis Ababa, Ethiopia March 23, 2019.   REUTERS/Tiksa Negeri


I am very uncomfortable remarking on the beauty of this image as it’s an act of violence, but there is no escaping the visual strength of the symmetrical composition, perfect timing and richness of colour in Mohammed Ajour’s picture of an explosion. The ball of fire reaching its crescendo, illuminating the buildings next to it, giving us the sense of scale of the blast all set against a black night sky. You have to respect the nerves of steel it takes waiting on the roof of a building for explosions just to take a picture. 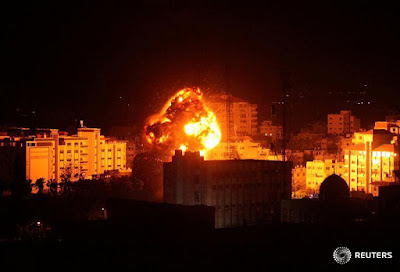 Flames and smoke are seen during an Israeli air strike in Gaza City March 25, 2019.   REUTERS/Mohammed Ajour

Mohammed Salem has captured a simple moment of gentle human kindness: a girl wiping her brother’s face. The powerful image of a sweet act is amplified 1,000-fold as they are standing in the rubble of their destroyed house after a missile attack. It’s not only her gentle action but her leopard skin print top and the red shoes, that seem completely out of context in the ruins. More pictures here 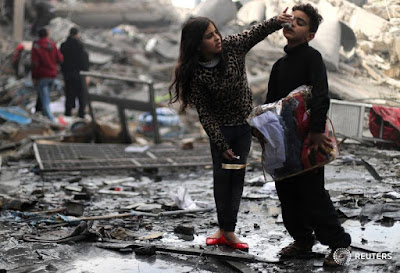 A Palestinian girl cleans the face of her brother outside their destroyed house after an Israeli missile targeted a nearby Hamas site, in Gaza City March 26, 2019.  REUTERS/Mohammed Salem

Broken glass in delicate shoes is an image that sets the mind on edge immediately, it’s just not right and that is why Ammar Awad’s detail picture is so powerful. The image perfectly opens the door to the story: you just need to know more. Why are these delicately coloured shoes with a pretty yellow bow covered in shattered glass? Whose shoes are they, and what happened to the owner? Why are they covered in glass? 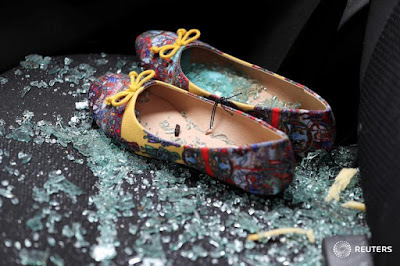 Shattered glass covers shoes left on the seat of a car that was damaged after a rocket hit a house north of Tel Aviv, Israel, March 25, 2019.   REUTERS/Ammar Awad


The passion and desire our photographers to make pictures never ceases to amaze me. Even though Ammar Awad was on assignment covering the scene of the rocket attack where he shot the picture above he spotted and took this beautiful, peaceful rural scene. It’s the pursuit of beauty of image that I most admire, be it missile attack or cow in a field. I suspect what caught Ammar’s eye is the graphic pattern of the three similar shapes in a landscape: bush, cow and trees. 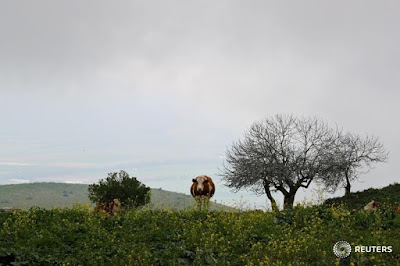 Cows are seen in a field in the Israeli-occupied Golan Heights March 25, 2019.   REUTERS/Ammar Awad


Just try looking away from those eyes, in Abduljabber Zeyad’s picture. When you do finally escape that gaze, you see the child in the background, dirty face, distressed, hand on head and enormous bump on his forehead. It’s only then that you notice what should be a distraction, the yellow and black shirt. You are then drawn back into those eyes again. A thought for you: if the father’s fingers were all kept in the frame would it be another distraction? I think so, so good they were cropped out. 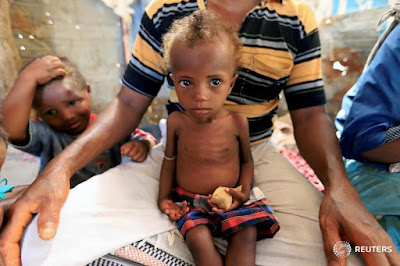 It’s hard to fathom what is going on in Amir Cohen’s picture as you look for a focal point -  all you get is a sense of cold grey steel weighing down on a mud base. As your eye jumps around trying to make sense of it, you may pick up the white inverted V or maybe the white 4 on the right. Finally you spot the figure in the foreground, dwarfed by this crush of intimidating metal. 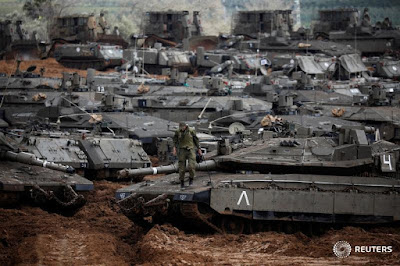 An Israeli soldier stands atop and tank near the border with Gaza, in Southern Israel March 27, 2019.   REUTERS/Amir Cohen


In complete contrast to Amir’s picture above, there is no confusion about the focal point as you are drawn immediately into the roaring flames of Mohamad Torokman’s image. As you study the flames they seem to come alive, drawing you into the angry hot fire and then forcing you out to the choking smoke on the right and back across to the background. Only then do you notice the three figures on the left, seemingly playing a bit part in the picture while stoking the flames. 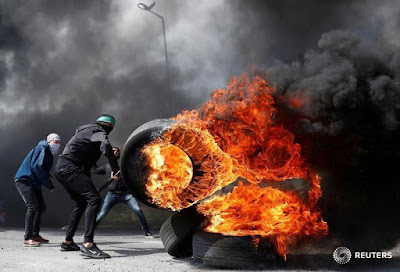 A Palestinian protester moves a burning tyre during clashes with Israeli troops near the Jewish settlement of Beit El, in Israeli-occupied West Bank March 27, 2019.   REUTERS/Mohamed Torokman

Dylan Martinez has shot a terrific story titled “capturing 24 hours in Gaza, one hour at a time”. Each picture in the series requires time, their strength is in their subtlety. I have chosen one image and I could have chosen many different ones. The image is shot wide so you can take in the scene, bare wasteland, the soil a putrid colour. In the background, pock-marked bare concrete walls, with burn marks and old plaster. Smoke hangs in the air. The overall sense is that of poverty. You then focus on the boy in the background, mouth open, shouting, taunting. In response to his taunts another boy prepares to throw something across the wasteland, or is it no-man’s land? They seem to be in trenches. This picture needs words to explain to us what we already sense about the image. Boys are re-enacting the ongoing conflict, but as play. See the whole picture story here 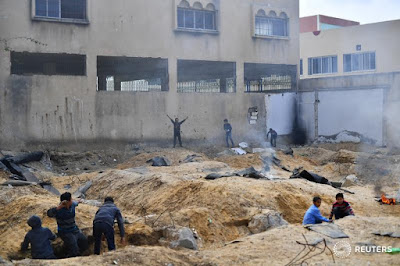 Children play a game of ‘Arabs and Jews’ outside a school in Gaza City February 20, 2019. Dylan says ‘These kids were burning some cardboard, they had trenches, they were throwing sand balls so they weren’t hurting each other. And I said, Oh, what are you guys doing?’ and they said ‘Oh we are playing Jews and Arabs.’ The image he said, ‘will probably stay with me forever’.   REUTERS/Dylan Martinez