A Week in Pictures Middle East and Africa April 5, 2019

A hand reaches in from the bright highlight as if attempting to touch the untouchable in Khaled Abdullah’s gentle picture of people suffering from cholera. Your eye goes straight to the women’s fingertips as everything else in this image is confusing and heavily backlit. The only other recognizable shapes are the saline bottles for the drip feed. You can see all you need to know in this compassionate image: someone is trying to get close to a loved one who is sick and in isolation. Read on here 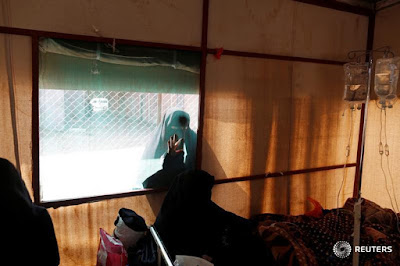 A woman standing outside a tent where patients receive medical care at a Cholera treatment centre looks in at patients in Sanaa, Yemen March 10, 2019.   REUTERS/Khaled Abdullah


What is attractive about Mohammed Salem’s picture is the rather playful use of scale and colour. Your eye flicks back from the writing on the bricks to the figures walking along the wall. Are the bricks in the foreground and is a trick of perspective is being played on us, or are they very large? The writings on the wall - messages of love and politics - add to this confusion. The colour plays with us too, giving an impression that this is a seascape, since the bricks are painted in the colours of the sea, and the rocks on top appear like crests of breaking waves just below blue skies and high white clouds. 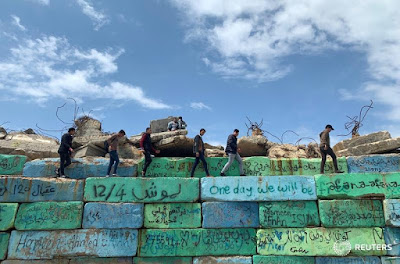 
The nonchalance of the protester as he strides towards the flames, hat at a jaunty angle and tyre in hand, in Siphiwe Sibeko’s picture, is just irresistible. He’s got the body language of someone who has had enough and is resigned to doing something about it. What is especially nice is that Siphiwe has kept the foot in the frame. Cut off toes are a pet peeve of mine. 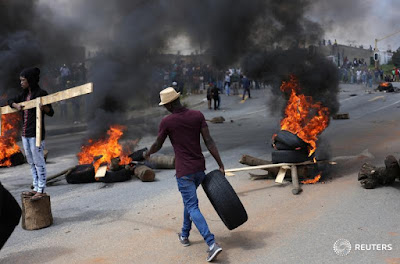 A man walks with a car tyre as he barricades the street during a service delivery protest in Alexandra township in the north of Johannesburg, South Africa, April 3, 2019.   REUTERS/Siphiwe Sibeko

Even though Ramzi Boudina has cut off the fingers on the left of the picture (see my pet hate above), he’s produced a wonderful picture that exudes a mood of celebration and relief. News has just broken that President Bouteflika has resigned and the protest mood has changed to one of celebration and it’s now unlikely there will be confrontation with the police. The faces say it all. The crowd seems to press down on the man on the foreground, the light giving us a sense of heat and claustrophobia as we squint against its brightness. Read on here 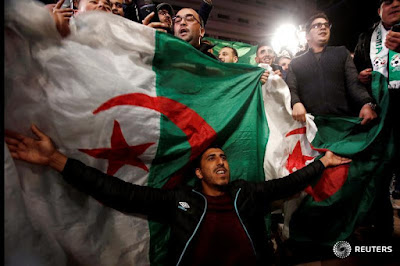 A quiet day in Cairo so Amr Abdallah Dalsh had time to play with some lines and shapes. The fan-like shapes of the bridge and the fence aided by the curves of the uprights speed us to the perspective vanishing point dotted by the red brake light of the motorcyclist. I like the sliver of light alongside the length of the building on the right of the frame, because without it the picture would ‘fall’ to the right. And lastly spare a moment to consider where Amr is standing to shoot this image, bearing in mind the chaos of Cairo traffic. 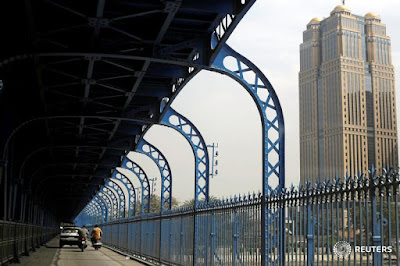 
F1 motor racing is a terrific spectacle. When a car is damaged at night and still powers around the track spraying sparks, it’s really quite amazing. To capture that action the way Thaier al-Sudani has succeeded in doing is not easy but you need to be lucky. It’s all about being in the right place. The action took place a long way away and the frame had to cropped very tightly. The background is clean and dark so the sparks show up, It’s also at night, so far more dramatic than if it had happened in daylight. I can’t get the notion out of my mind that these drying items of clothing are representative of the victims who were killed or had limbs dismembered during the Rwandan genocide. Brightly coloured shirts missing arms, trouser legs missing feet and necklines missing heads, Jean Bizimana’s picture haunts me. Read on more here 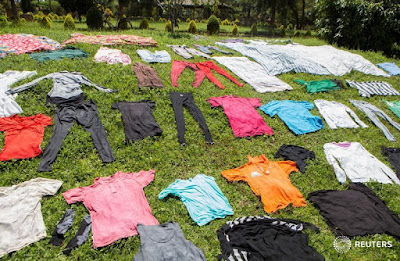 Laundry is aired to dry on the grass at the Agahozo-Shalom Youth Village built to rehabilitate children who lost their families in the 1994 Rwandan genocide in Rwamagana, eastern province of Rwanda April 1, 2019.  REUTERS/Jean Bizimana