The light in Alaa Al-Marjani’s picture is a little tough: top artificial light creating downward shadows, flat highlights and a colour cast. But this does not distract from an image that intrigues. What is best about this image is the timing, even though the light is poor and the women are covering their heads, you can just about see all the faces, with downcast eyes, and through this you get a powerful sense of devotion. Take the time to look at all their faces. 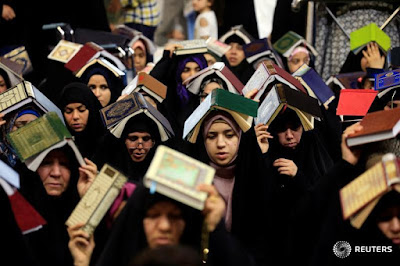 Iraq Shi’ite Muslim women place copies of the Koran on their heads during the holy month of Ramadan at the Imam Ali Shrine, in the holy city of Najaf, Iraq May 28, 2019.   REUTERS/Alaa Al-Marjani

Each week Reuters photographers are commissioned with a theme of the week. This week is ‘beauty’ next week is ‘tobacco’. They are free to shoot what they want on this theme. Hayam Adel has chosen beauty treatments and used full-on eye contact and a bold crop mixed with warm colours to shoot this striking portrait of a young woman getting her hair braided and her hand hennaed. Cropping off the top of the head and leaving the open space top-right draws you into the eye and then to the carefully braided hair. 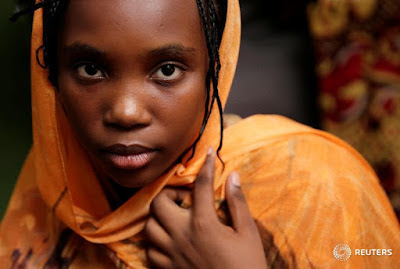 A Sudanese girl with braided hair poses for a picture in Cairo May 29, 2019.   REUTERS/Hayam Adel

Sometimes a picture works well cropped in two different ways, as is the case with Ronen Zvulun’s picture of Netanyahu. The full vertical image, a classic ‘top of head’ in frame with the hand and fingers leading you through the image to the eyes, works and the quality is good. A strong single-column image, in newspaper terminology. 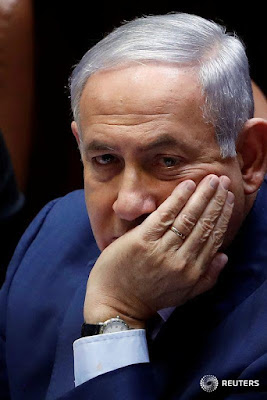 Israel Prime Minister Benjamin Netanyahu sits at the plenum at the Knesset, Israel’s parliament, in Jerusalem May 30, 2019.   REUTERS/Ronen Zvulun

But a bold horizontal crop brings Ronen’s picture into the classic, easy to use and easy to consume digital platform format. It also brings your attention to the eyes in deep contemplation. Look carefully where each eye appears to be looking. The hand is creating wrinkles that bring you back into the image and those eyes as you are led from bottom left to top right by the fingers. 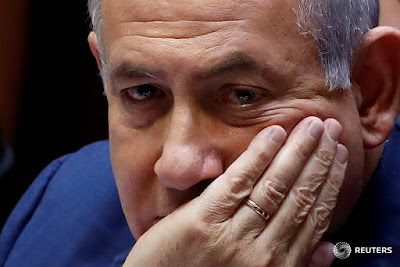 Israel Prime Minister Benjamin Netanyahu sits at the plenum at the Knesset, Israel’s parliament, in Jerusalem May 30, 2019.   REUTERS/Ronen Zvulun

Ammar Awad’s picture plays a visual game of hide and seek. Your eye chases around the cool blues and greens and between the highlights and shadows looking for something to focus on. And then suddenly you see Netanyahu’s face, half obscured, peering at you from a protester’s banner. What a clever and creative way to photograph a demonstration, through a passing bus. 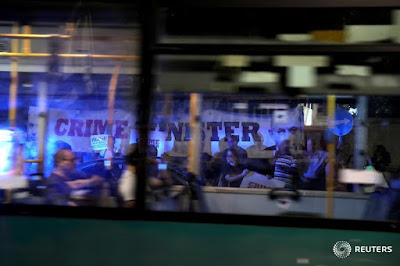 A bus passes next to the residence of Israel’s Prime Minister Benjamin Netanyahu during a protest against him in Jerusalem May 30, 2019.   REUTERS/Ammar Awad

Waleed Ali’s picture has immediate impact with its strong graphic composition. A solid black space is bisected by a gold panel occupying just about half the image, eye-catching even when viewed small. You then notice the sea of people moving through a bold L shape from top left to bottom right. It’s then that the single figure, wearing a white shirt, jumps out at you as he stretches to touch the holy Kaaba. And once you have spotted him you just can’t look away as he tries to resist the movement of the tsunami of people to prolong his touch. More pictures on Ramadan here. 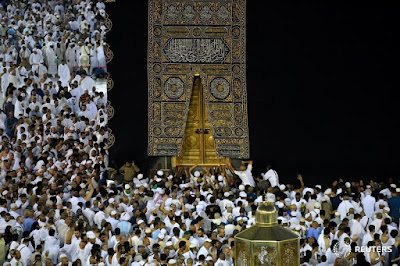 Muslims perform Umrah around the holy Kaaba at the Great Mosque during the holy fasting month of Ramadan in Mecca, Saudi Arabia, May 26, 2019.  REUTERS/Waleed Ali

Some pictures just lift the heart, and Siphiwe Sibeko’s image does just that. Surrounded by colour, sound and movement is the biggest, warmest smile of the week. Siphiwe’s picture is perfectly timed so the waving flags don’t obscure the face. But the real secret to the success of this image is the eye contact. She’s looking right at you, even from across a crowded stadium. 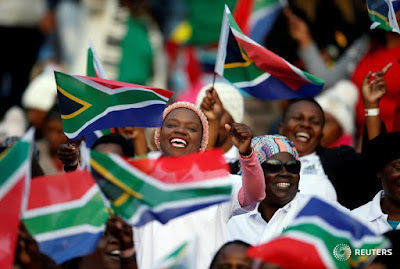 Guests sing and dance as they arrive for the inauguration of Cyril Ramaphosa as President, at Loftus Versveld stadium in Pretoria, South Africa, May 25, 2019.   REUTERS/Siphiwe Sibeko

Just enjoy the wonderful gentle horizontal zigzag composition of Mohamad Torokman’s picture. People are spaced out against the tooth-like concrete barrier as they make their way under the solid black tones of the canopy, all set against the highlight of the blue sky. Take the time to notice how Mohamed plays with the viewer, the figures right and left are in fact shadows of people – a nice touch. 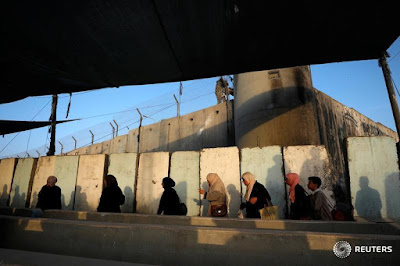 Palestinians make their way to attend last Friday prayer of Ramadan in Jerusalem’s Al-Aqsa mosque, at Qalandia checkpoint, in the Israeli-occupied West Bank May 31. 2019.   REUTERS/Mohamad Torokman

A very simple picture by Aboud Haman that is quite thought-provoking. At first sight, it’s just a couple, dwarfed by the rubble of a destroyed building, not uncommon in Raqqa. But look deep into the shadows. These people are not walking past it, they are walking through it. A potentially dangerous journey, but in the context of recent history, not as dangerous as it was before. What occurred to me is how things that are not normal in many places seem completely commonplace elsewhere. 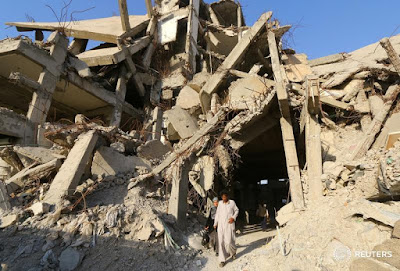 People walk through the rubble of damaged buildings in Raqqa Syria May 29, 2019.   REUTERS/Aboud Hamam

The name Idlib conjures up images of a city gripped with tension and destroyed by conflict. Khalid Ashawi’s picture of bread being made in a bakery is counterintuitive and gives us a certain amount of respite from what is imagined. The whole image is almost completely monochromatic, the colour bleached out and the figure silhouetted by a single light bulb on the wall. A hint of a kiss of pink on the wall and the glow of the oven warm the whole image to the extent that you can almost smell that bread. Read on about Idlib here 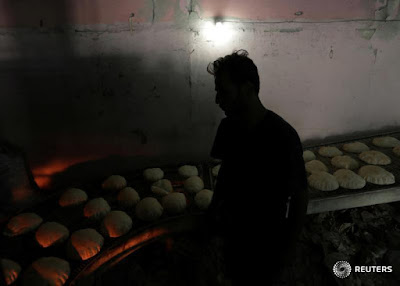 A worker bakes bread inside a bakery before Iftar, or fast breaking, during the Muslim fasting month of Ramadan in the city of Idlib, Syria May 28, 2019.   REUTERS/Khalil Ashawi

I really don’t do cute, but hard to resist is Amir Cohen’s lucky and affectionate image of a fruit-bat suckling. The strength of this image is that it is pin sharp with a shallow depth of field, drawing your focus to the stretched teat, the bony wing and the touch of highlight in the eye of the pup. Soft-focused and in the background, is that a slightly indignant look on the mother’s face? 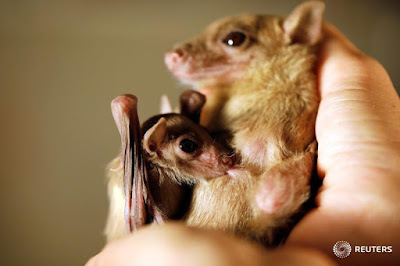 An Egyptian fruit-bat pup suckles from its mother at a laboratory in the Steinhardt Museum of natural History in Tel Aviv, Israel May 27, 2019.   REUTERS/Amir Cohen