The devastation of a mud slide is graphically illustrated in Newton Nambwaya’s striking picture. As far as the eye can see a brown gash of mud cuts down from the horizon, through the green trees, destroying and smothering all in its path. The woman in the foreground struggles through the mud, seemingly with little or no hope of achieving anything. This all seems slightly unreal. It was torrential rains that caused this mud slide, but the scene is now bathed in warm sunshine. 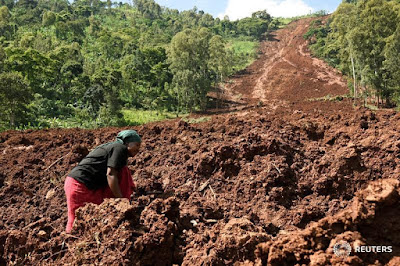 A resident struggles through the destruction caused after a landslide rolled down the slopes of Mt Elgon through the Shisakali village in Bududa district, Uganda June 6, 2019.    REUTERS/Newton Nambwaya

Strong warm highlights and dark cold shadows in Khalil Ashawi’s bomb aftermath picture give us a real feel of the chaos of what is going on. It’s hard to work it out. Your eye is drawn immediately to the bright yellow and you spot the spray of water, or is it smoke? It’s then that you see the man with the jeans and white t-shirt, behind him another with the fire hose dousing the damaged vehicle. The ground, wet with water, reflects the light and the action. Slowly, the bystanders can be seen in the shadows on the right. They seem calm and used to all this. 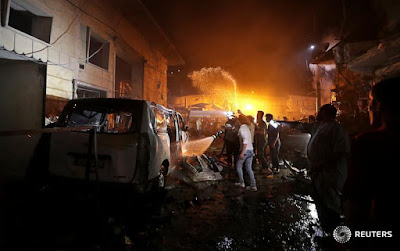 People try to extinguish a fire at the site of a car blast in Azaz, Syria, June 2, 2019.   REUTERS/Khalil Ashawi

The overall shape of the police arriving at the scene is like a wave crashing on the beach, with a strong right-to-left diagonal formed by the line of their helmets. Then you get a sense of a strong undercurrent pulling back. I think it’s the position of their arms that give us this sense of back and forth motion. Take special notice of the man’s hand in the centre of the picture. He looks like a surfer in a powerful current trying to control the flow of the wave. 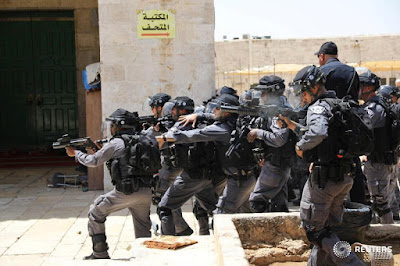 Israeli policemen gather as they aim their weapons during clashes with Palestinians on ‘Jerusalem Day’ on the compound known to Muslims as Noble Sanctuary and to Jews as temple Mount, in Jerusalem’s Old City June 2, 2019.   REUTERS/Ammar Awad

A cacophony of colour and line makes your eyes swirl around Afolabi Sotunde’s picture from Eid prayers. Finally, you are allowed to rest on the brand name Hello Kitty, to make this a terrific business news picture. Then, and only then, you see the fingers reaching to the edge of the frame. Imagine just how disappointing it would be if these were cropped off! To see more picture from Eid click here 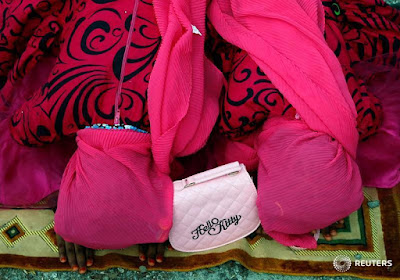 An affectionate and simple set of pictures by Abdullah Dhiaa Al-Deen looks at the tradition of buying new clothes to celebrate Eid. The black background and the relaxed poses draw attention to the varieties of clothing purchased. Abdullah is taking a break from news photography to bring us a visual surprise to enjoy. I have pulled them together as a combination so you can see a small selection. 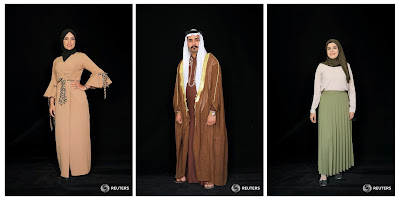 All colour has been choked out of Thaier Al-Sudani’s cityscape by the smoke from the chimneys. The image looks like it’s from a bygone era. A tiny figure is dwarfed by the chimney stacks and the extent of the pollution. It’s the vehicle on the right that snaps us out of this illusion that this is from the past. It’s happening right now. Read on here 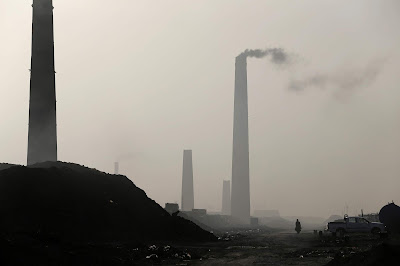 A general view of brick factories as smoke rises from the chimney stacks in Nahrawan in Baghdad, Iraq, June 3, 2019.    REUTERS/Thaier Al-Sudani


All compositional lines in Azad Lashari’s picture lead to the fiery open mouth, from the torch itself, the line of the eyebrow, to the clothing of those watching. The yellow glow of the flame will be snuffed out in an instant as the worshipper closes his mouth, shutting off the oxygen to the flame. But the moment before that happens has been captured forever. 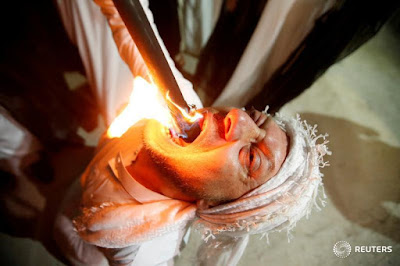 A member of the Iraqi Muslims dervishes of Sufis, puts a torch of fire into his mouth as he takes part in a ritual during the Muslim holy fasting month of Ramadan, in Erbil, Iraq May 19, 2019.    REUTERS/Azad Lashari


Like a Mondrian painting, this picture is made up of rectangular blocks, with the strong vertical lines of the telegraph poles intersecting the horizonal lines of the cables and breaking the image up into sections. A slab of solid back-lit black is counterweighted by the bright colours of the translucent flag held aloft. The picture structure feels like a loud drum beat. 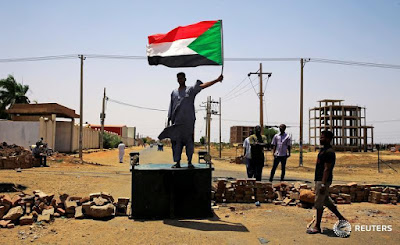 A Sudanese protester holds a national flag as he stands on a road barricade demanding that the country’s Transitional Military Council hand over power to civilians, in Khartoum, Sudan June 5, 2019.    REUTERS