Very hard to choose a single image from the hundreds of powerful news pictures that have moved on the wire in the last few weeks from Iraq, Syria, Lebanon, Algeria, the Palestinian Territories and Israel, but here goes. First thing I need to do is thank the whole team in the Middle East and Africa for their hard work and dedication to deliver fast, unbiased and powerful news image via the Reuters network.

The temptation would be to lead with an image of clashes from Iraq, but I wanted to start with the less obvious, but no less powerful, picture by Ahmed Jadallah. As well as shooting the violence, Ahmed wanted to explain, through the words and portraits of the demonstrators, why the violence is happening. The half-length portrait is shot in cool, soft light, giving the image a feeling of pensive, uneasy and temporary calm. The long stare, straight into the camera, by the subject, tells us he wants to say something. The chaos of the situation around him, his broken arm and the ad hoc safety gear he is wearing tell us that what he has to say is worth listening to. The extended caption (something I am never really a fan of) works well here as it adds the details we want to know. You can see the whole series of picture here. 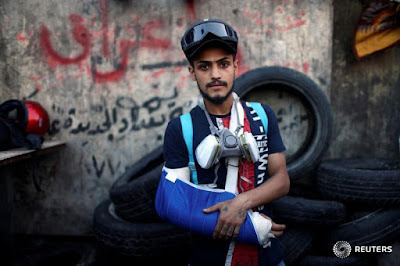 Mohammad Said Yasseen, an Iraqi demonstrator poses for a picture during the ongoing anti-government protesters in Baghdad, Iraq, November 5, 2019. He said “we are only carrying flags, we don’t have anything else in our hands, but they keep hitting us and we’ve had at least seven martyrs here. I want my rights, we are being oppressed, we have nothing, no schools, no decent hospitals, no riches for the people. They only know how to steal, and they steal from us, leaving is with nothing. We are only asking for education and health. We must get rid of the corrupt ones and without that there is no solution. We want a civil state, we don’t want corrupt parties and corrupt politicians. I want these youths to govern us.” REUTERS/Ahmed Jadallah

Stretched to the last inch, Alaa al-Marjani’s picture has the same feeling of apprehensive tension we all get when we watch a pin slowly being pushed into a balloon. We know there is going to be a bang and we brace ourselves for it. Heads bowed, arms tensed, protesters hold the industrial-sized catapult as a man pulls back the loaded elastic. Everyone else is standing in the detritus of street conflict, watching and waiting for the explosive moment of release. As we look we hold our breath. Latest from Iraq here. 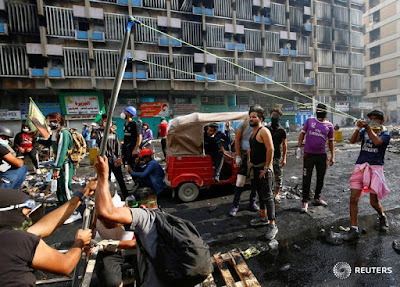 The demonstrations in Lebanon at times have a party feel and are less violent than the protest in Iraq, but there is an undercurrent of a sense of fear of a wider conflict. In a sense the potential conflict in Lebanon has much greater regional and global implication given the powerful forces which operate in the background of local power politics. With this in mind, I am very drawn to Andres Martinez Casares’ image. It has a very complex composition: a slight tilt gives you a sense of unease, the strong reds and harsh light in the foreground fight for your attention, with the back focus that wants to draw you past the policeman in the foreground to the sharp background through a gap in the fence. As your eye jumps between the two, you notice the demonstrators banging rocks on the metal fence. Finally, you settle of the three solders standing on the rubble. You get a sense that they are waiting, and something else is going to happen. Latest from Lebanon here. 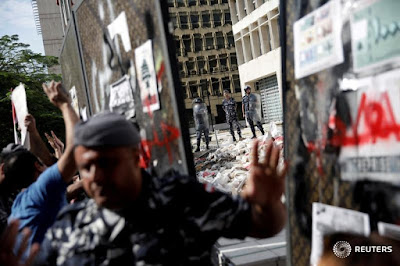 Another picture by Andres also caught my eye, as it too has a strong sense of the mood of the demonstrations. But I could not quite understand why I had a feeling that something visually was amiss. I spent quite a long time looking, then it struck me. The highlight on the wall on the far right distracts your eye from the sleeping protester in the car and lead you to the flames and smoke the background. 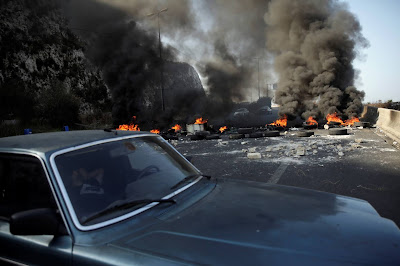 A man sleeps in a car next to burning tyres barricading the highway during ongoing anti-government protests at Nahr El Kalb, Lebanon, November 13, 2019.   REUTERS/Andres Martinez Casares


Crop out that highlight and suddenly you see him and you eye is drawn to the shadows in the foreground. And now you can see the man sleeping you get a better sense of the mood of the protests. Not often you can sleep when it’s your chosen role to guard the burning barricades. Make sense? 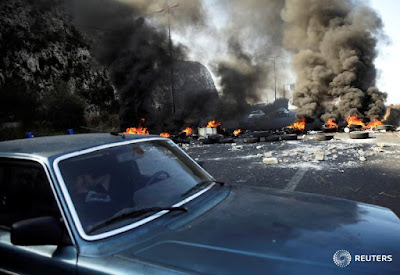 
I am more than a little uncomfortable highlighting Ibraheem Abu Mustafa’s air strike image, especially after I read that people suffocated in the sands under the building. But I am drawn to the shapes created by the destroyed building. With the exception of the holes in the plastics on the left of the image, there is no sign of damage beyond the circle of the wrecked building. The high position from which Ibraheem has taken his image demonstrates in no uncertain terms that one building was targeted. 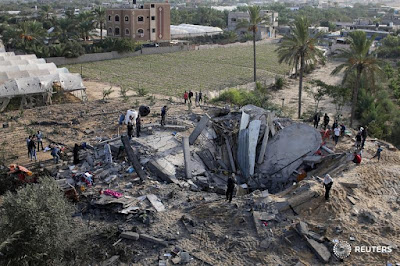 Palestinians gather around the remains of a house destroyed in an Israeli air strike in the southern Gaza strip November 13, 2019.   REUTERS/Ibraheem Abu Mustafa

A birds-eye view by Sumaya Hisham makes for a very graphic shape in her picture. At first glance it looks like an ancient representation of the bone structure of a mythical creature, or, if your mind works another way, rows of freshly dug graves. It is in fact artisanal mining for diamonds. The story, that was released this week can be seen here. 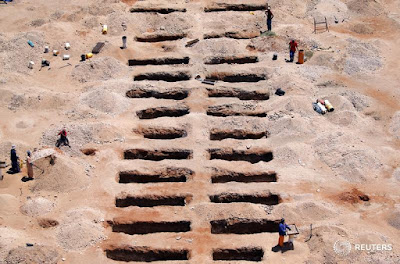 Batho Pele Artisanal mining Cooperative miners are seen form the air as they mine for diamonds in Kimberley, South Africa, October 22, 219.   REUTERS/Sumaya Hisham

Full of joy is the best way to describe Mike Hutchings’ picture. Warm sunshine, blue skies, smiling faces that fill the space from the horizon to the foreground, a cheeky hint of a tilt and bright colours all combine for a feel-good factor. Take one of these many elements out and it would not be selected. Take the time to look at all the faces and enjoy. 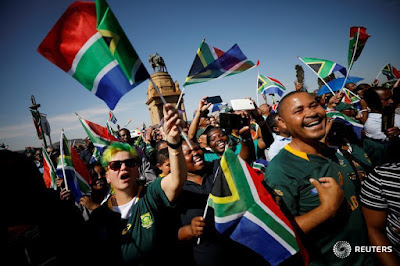 A bold and simple illustration picture by Philimon Bulawayo might appear a strange pick this week. One would expect, when a new currency is launched, to see crisp new notes being printed or thumbed through in shiny banks. But Philimon’s thoughtful idea to isolate a single two-dollar coin held in a hand is probably the best way to try to illustrate the complexities of Zimbabwe’s struggling economy. 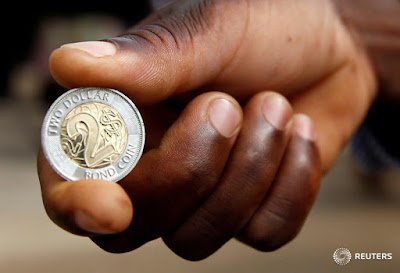 A man poses for a picture with Zimbabwe’s new two-dollar coin as customers queue outside a bank in Harare, Zimbabwe, November 12, 2019.   REUTERS/Philimon Bulawayo