A Week in Pictures, Middle East and Africa, February 7, 2020

Alaa al-Marjani has shot a picture that intrigues, with contradictions that unsettle what you’d naturally feel. Leaning back and looking relaxed as you are surrounded by flames is not the natural order, especially at a demonstration. The picture has been cleverly shot to give a realistic perspective of what is going on, the flaming tyres are either side of the protester. Had it been cropped to remove his legs and the background the image would have a completely different feel. 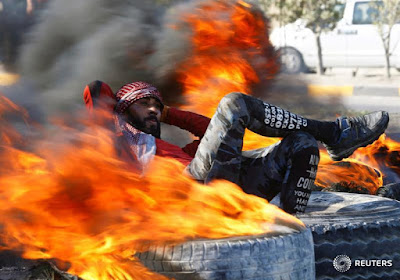 Prior to the game, videos of a fan threatening violence with weapons including, knives, blades, a hammer and a chisel circulated on social media, so it was no surprise when trouble erupted. Mohamed Nureldin Abdallah’s picture wonderfully depicts the scene of chaos as police surround players and the referee to protect them from attacks. I like the contrast between the players’ body language, which is quite relaxed while the tension in the faces of the police is obvious. 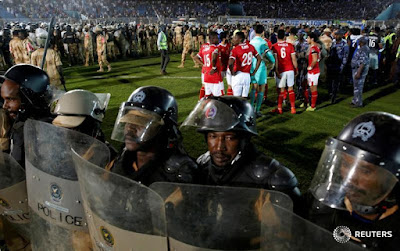 With people crushed, squeezed and cramped from foreground to horizon, you feel the claustrophobia in Shorky Hussien’s picture illustrating the fact that Egypt’s population will hit 100 million in the next few days. What takes a little while to notice is that you can’t see a single man anywhere in the frame, and that is because it’s a women-only carriage. Read on here 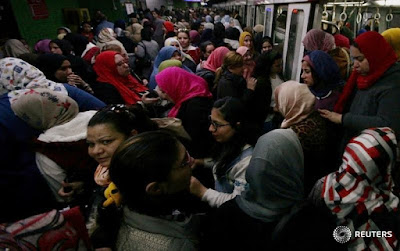 You can almost hear the echo of the steps of a mother and child in Philimon Bulawayo’s picture from inside a hospital. Although it looks quite a dark and gloomy place, the happy swing of the child’s bag gives it a warm feel. I can’t help but imagine hearing the chitter chatter of the child’s voice over the cold footsteps. 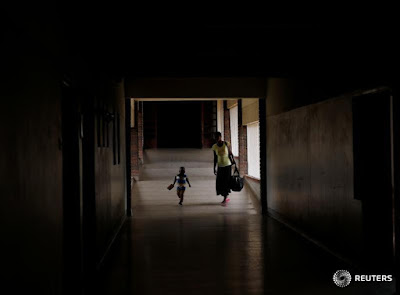 A mother and child arrive for treatment at a local government hospital in Harare, Zimbabwe, February 4, 2020.   REUTERS/Philimon Bulawayo

Siphiwe Sibeko’s picture puts me in two minds. It’s about load-shedding (power cuts) in South Africa, and instinctively I really want to the crop out the cold blue light of the phone bottom left to leave us with the warm glow of the single light source of the candle. But the story is about the lack of power and this single electric light adds weight to illustrating the story. What do you think? 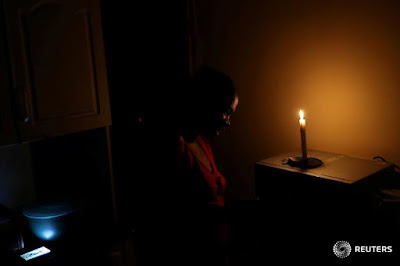 Nokuthula Thwala looks on next to a candle during load shedding in Soweto, South Africa, February 2, 2020.    REUTERS/Siphiwe Sibeko

It’s the touch of the man on the body that gives this image the empathy I was looking for in what otherwise could be unfairly interpreted as a utilitarian burial process. Everyone is precariously close to the grave, the digger still in it. The man on the right is holding the body’s head with his feet, seemingly to stop the body rolling into the grave. What really strikes me in Alaa al-Marjani’s image is the strong circular compositional line of the mourners that draws us anti-clockwise into the picture and down into the grave past the obvious and slightly disturbing shape of the body of the dead protester. 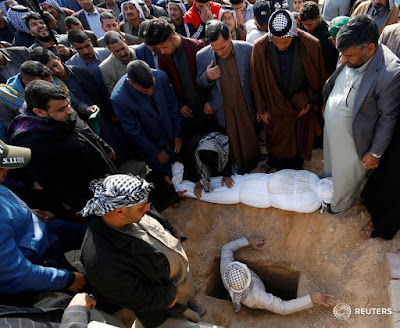 Mourners gather around the body of a demonstrator who was killed at an anti-government protest overnight, during the funeral in Najaf, Iraq, February 6, 2020.   REUTERS/Alaa al-Marjani

In Luc Gnago’s picture your eye is immediately drawn to the banner that is front and centre in the picture, because the eye loves to make sense of words in pictures. Cutting down the middle of the image is a post that should cut the image in two, but it doesn’t. The slight tilt and the words cutting across it prevents the post from dividing the picture in two. Once you have read it you are drawn into an image of ecstatic celebration, open-mouthed joy, big smiles and waving arms. 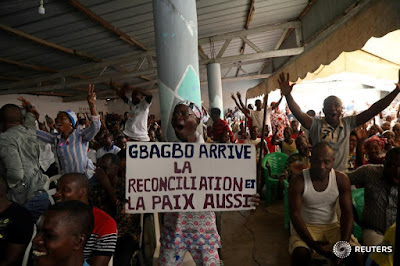 Temilade Adelaja’s picture just oozes warmth and affection even though it’s slightly messy shape, causing your eye to wander around. Smiling faces and a Tupperware presentation of food, the sagging sign ‘Veggie Victory’, and the roof supports all zoom you to the back of the frame, to the man tucking into his vegan food, yum. I like the daring crop of the woman on the right, right down the middle of her face, her one eye looking across seems to say to me ‘hurry up I want to get some food’. Read on here. 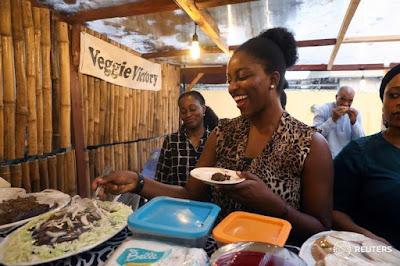 A woman serves herself to a plate of vegan food at a gathering for vegans in a restaurant in Lagos, Nigeria January 18, 2020.     REUTERS/Temilade Adelaja

I can’t decide if Satish Kumar’s picture reminds me more of the monster creation of Sid Philips, the boy next door in Toy Story or the sensuous character in Alex Garland’s sci-fi film Ex Machina.The robot is graceful in shape, its limbs extending out to conduct the orchestra. But the body then loses its grace as you look down towards the mechanics. Would it feel different and less graceful if the face was less feminine? Either way it’s a terrific picture of technology. See more here. 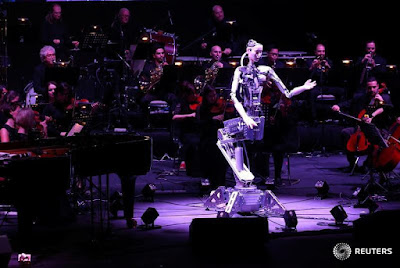 
Mohamad Torokman’s picture at the protests is perfectly timed and perfectly shaped. The thrown rock is just far enough away from the arm to see it in flight yet close enough for it to be seen. The line of the wall and the smoke guide your eye to the action of the figure and his upturned masked face. The composition shapes and lines divide the image into the classic thirds. The richness and range of colour and tones also build the image giving it added depth; from the warm tones of the flames, the cool greys of the wall and skies to the dark shadows of the smoke. 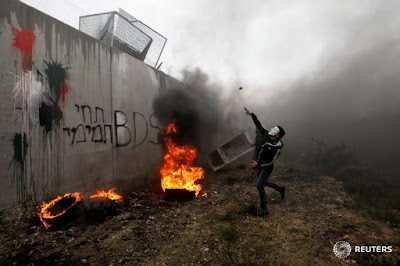 A Palestinian demonstrator hurls stones at Israeli forces as tires burn near the Israeli barrier during a protest against U.S President Donald Trump’s Middle East peace plan in the village of Bilin, in the Israeli-occupied west bank February 7, 2020.   REUTERS/Mohamed Torokman