Mohamed Torokman’s picture is just crammed full of action and so perfectly timed that I don’t think it can be any better. The background is solid with black smoke, the soldier’s rifle barrel glints against it as flames roar with reds, oranges and yellows. We are given enough highlight detail of the soldier at the height of his jump, so he stands out from the heavy smoke. The dust trailing from his back foot gives us a clue to the speed at which he is running. Read on here. 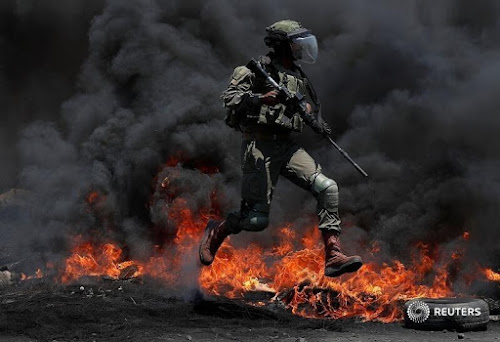 An Israeli border police member jumps during a Palestinian protest against Israel's plan to annex parts of the Israeli-occupied West Bank, in Kafr Qaddum near Nablus July 3, 2020. REUTERS/Mohamad Torokman

The light of the motorcycle beams through what at first appears as to be heavy rain being displaced by the speeding bike in Baz Ratner’s terrific picture. But what we see against the shadows and dark tones of the bush are in fact thousands of locusts being scattered from the road. The hills in the background give us a sense of the size of the locust swarms that are devastating the pastoral lands of Turkana.  Video explaining the issue here. 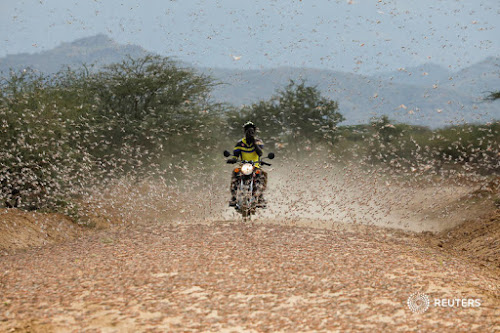 A motorcycle rider tries to protect his eyes as he drives through a swarm of desert locusts at the village of Lorengippi near the town of Lodwar, Turkana county, Kenya, July 2, 2020. REUTERS/Baz Ratner

I can’t help feeling a little sad as I look at Alaa Al-Marjani’s picture although I know maybe I am possibly misinterpreting the body language. Even though the man at the window wants to get in closer to his relative, the only thing stopping him is the glass but the patient is keeping away, he is sitting on the edge of the bed, his body turned away. Alaa has used the space between these men and the red blanket to drive home a real sense of uneasy distance. 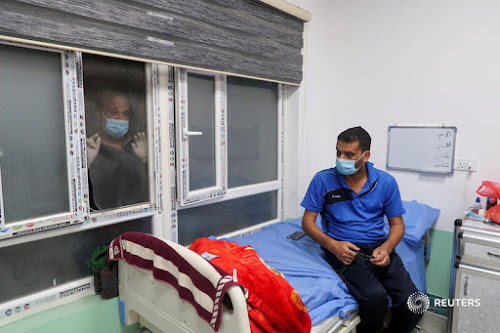 An Iraqi man infected with the coronavirus disease (COVID-19) talks with his relative through a quarantine window at Al-Hakim Hospital in the holy city of Najaf, Iraq June 16, 2020. Picture taken June 16, 2020. REUTERS/Alaa Al-Marjani

There is such a feel-good factor in Mohamed Abd El Ghany picture it makes you want to go straight away to Egypt and pay over the odds to ride on this camel. A big smile, bright colours, blue sky and mirrored glasses to welcome tourists as the guide struggles to keep control of the camel. Its almost reptilian in appearance head and neck breaks the skyline filling the space in the sky left by the pyramid, the restraining chain continuing the line of the compositional triangle. 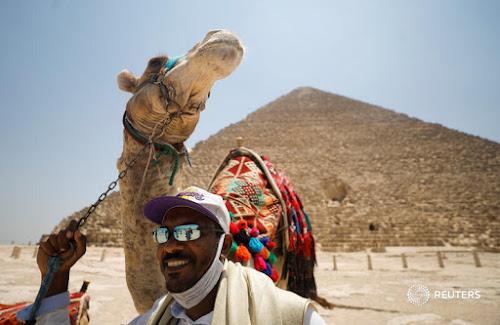 A man with a camel is seen in front of the Great Pyramids of Giza after reopening for tourist visits, following the outbreak of the coronavirus disease (COVID-19), in Cairo, Egypt July 1, 2020. REUTERS/Mohamed Abd El Ghany

Dust, heat, tension and potential chaos all crammed into one frame by Mohamed Nureldin Abdallah. The picture seems to go from icy blue of the soldiers to the dusty yellow/orange heat of the protesters in the background. I love the small details of the outstretched fingers  reaching into the murk. 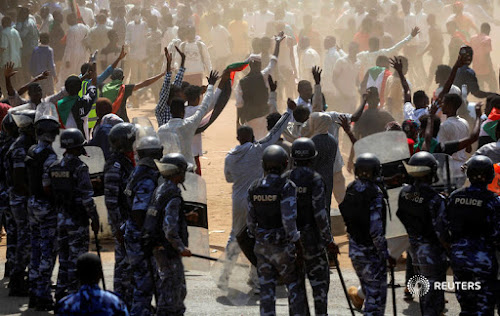 What a beautifully composed picture by Njeri Mwangi as the red gloved action takes places against a backdrop of lines, shapes and shadows that cut across the frame like giant brushstrokes as a cubist painter sets out their canvass. What I especially like is how the edge of the shadow cuts down dra you eye to the highlight of the boxer’s face. 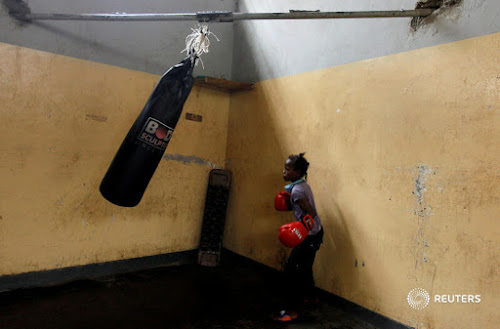 A child hits a punching bag as she attends a boxing training session at the Mathare North Boxing Club, after the government ordered closure of all schools due to the coronavirus disease (COVID-19) outbreak, in Nairobi Kenya June 17, 2020. Picture taken June 17, 2020. REUTERS/Njeri Mwangi

The lifted arms of the solitary figure in Khaled Abdullah picture says it all ‘Oh no what now?’ We are left in no doubt that his livelihood is destroyed as he walks on the smoldering rubble. The bright orange shirt, really the only colour in the frame, and his position at the bottom of the wide compositional V of the twisted metal snaps our attention straight to his despair. 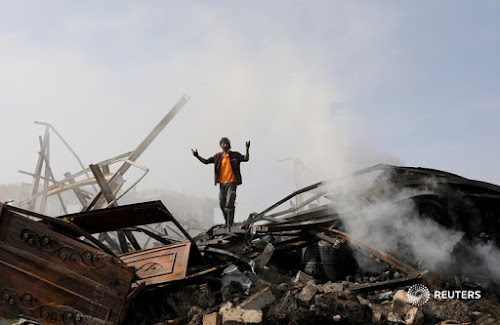 A worker reacts as he stands on the wreckage of a vehicle oil and tires store hit by Saudi-led air strikes in Sanaa, Yemen July 2, 2020. REUTERS/Khaled Abdullah

To make a cleaner image one might be tempted to crop out the car in the rear of Mussa Qawasma’s picture to highlight even more the joy of the boy’s face as he plays in the smoke; but try it with your thumb. Suddenly something is lost. I think what makes this such fun is the fact that this strange opportunist game is taking place in the street and it’s the context of the ordinary that highlights the joy. 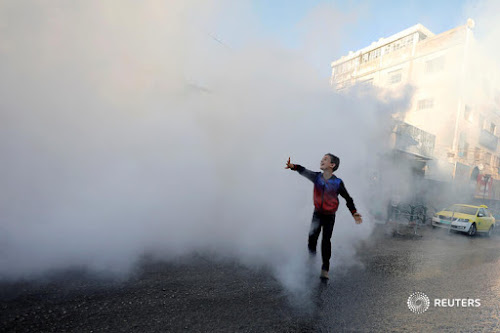 A Palestinian boy plays as disinfectants are sprayed by workers to sanitize cars and shops amid the coronavirus disease (COVID-19) outbreak in Hebron in the Israeli-occupied West Bank June 28, 2020. REUTERS/Mussa Qawasma