It takes a few moments to work out from this almost abstract image that this is a close-up of blood, bullet cases and buttons left behind after more than 300 people were killed in the Al Rawdah Mosque in Sinai, Egypt,. Dozens of images were shared on social media after the attack, none of which we could get the rights to use, but I think this complex image by Mohamed Soliman says it all. 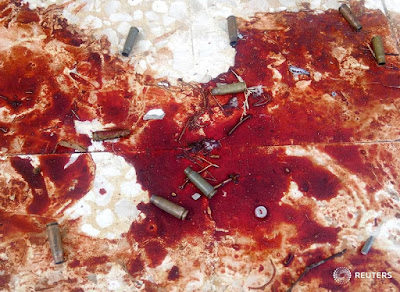 Empty shells and blood stains from victims are seen after an explosion and attack at Al Rawdah Mosque in Bir Al-Abed, Egypt November 25, 2017.   REUTERS/Mohamed Soliman

A simple shape, classic thirds composition and bold but soft colours make Siphiwe Sibeko’s image a definite pick for this week’s round-up. Once you see past the worker’s yellow jacket you join him in his view as he takes a break, leaning on a hoe. You speed through the lush fields of growing tobacco, past the tiny dots of his fellow workers in yellow jackets, to the distant horizon lined with dark trees and looming storm clouds. I expect the worker has a different set of thoughts from mine; maybe he’s thinking of the work he is going to have to do in the coming rain. 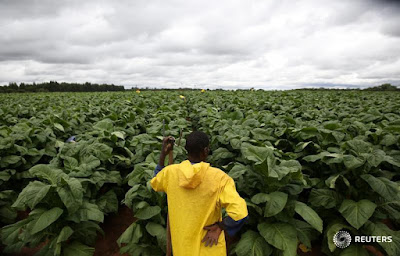 A farm worker is seen during the harvesting of tobacco at the Dormervale farm east of Harare, Zimbabwe, November 26, 2017.  REUTERS/Siphiwe Sibeko

What a powerful and affectionate portrait by Siphiwe Sibeko! I feel I am going to be eaten alive if I don’t agree to whatever Father Mukonori says or thinks. Direct eye contact freezes the viewer; you can almost feel his arms, which are out of the frame, enveloping you. Talking of frames I love it that his glasses appear as if they will pop off his face as they are under such strain from this arresting and yet kind face. 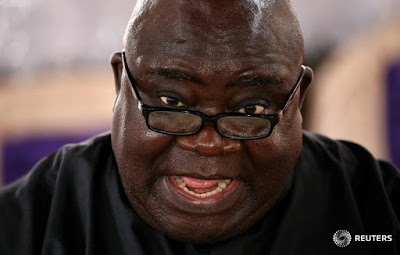 A very terrifying picture shot early in the day by Baz Ratner, with people spilling through gates around a soldier in a fog of tear gas. Looking at the picture I fear they are going to get crushed in the rush to enter the stadium. The tear gas blurs the background, helping to draw your attention to the fallen people in the foreground as they scramble to safety. To see a slideshow of pictures from the inauguration click here 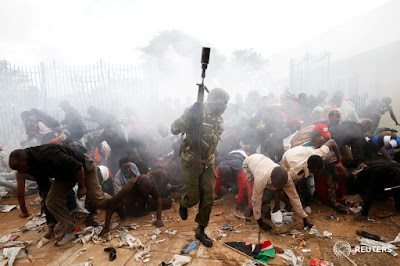 People fall as police fire tear gas to try to control a crowd trying to force their way into Kasarani stadium to attend the inauguration of President Uhuru Kenyatta in Nairobi, Kenya. November 28, 2017.   REUTERS/Baz Ratner

The opening of a shopping centre doesn’t immediately spring to mind as a subject for good pictures but Afolabi Sotunde has turned the mundane into something special. The frenzy of people grabbing baskets, arms thrashing about in a sea of red and white, has the feel of the start of a triathlon. Once you look beyond the splash of colour you start to see the expressions on the faces, so take some time and look at them one at a time – wonderful. What is interesting is that an editor on the picture desk decided to crop this picture even tighter. Personally I like the wider version: balloons, ‘see you soon’ and the gold arch in the background framing the mayhem. But I also like the tight version so you can really see the faces. I’ve included both so you can choose. 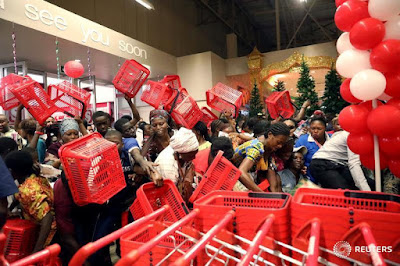 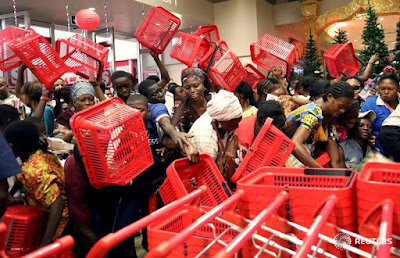 People reach out to pick up baskets at a newly commissioned Shoprite store at Novare Gateway Mall in Abuja, Nigeria November 30, 2017.   REUTERS/Afolabi Sotunde

A warm and affectionate picture by Mohamed al-Sayaghi as people crowd in to take part in the celebration of Prophet Mohammad’s birthday in Yemen. With some women already precariously balanced on the fence, clutching their friends or the railings, others scramble up to get a better look. Initially I looked at cropping out the busy figures wearing green in the foreground but then decided if I did that it lost context. 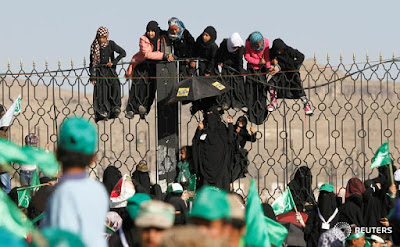 ‘You stink!’ was the shouted slogan of angry protesters towards government officials accused of failing to resolve the rubbish (garbage) crisis in Beirut in 2015. Aziz Taher’s striking picture shows the mountain of rubbish that has continued to build and is now the focus of a Human Rights Watch report. What I like about this picture is the sense of the scale of the problem, portrayed by the strong diagonals that lead you from the mountains of rubbish in the foreground, past housing, onto the bay in the background and then finally the hills in the distance. Each band of decreasing perspective visually adding to the size of the problem. I can’t begin to imagine just how bad it all smells.    To see the whole story click here. 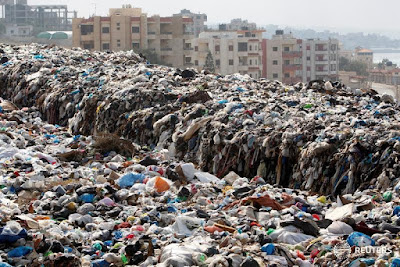 Piled up garbage is seen in Jiyeh, near Beirut, Lebanon November 29, 2017. REUTERS/Aziz Taher