Clashes erupted in the region after US President Donald Trump’s announcement to move the U.S. embassy to Jerusalem. Mohamed Torokman’s picture is as much about the US flag being in tatters as it’s about clashes, for me symbolising the almost global condemnation of this decision. The figure reaching down, their hand creates a moment’s tension between dark shapes and the skies that leads us down into the flames of the picture with what I feel is a growing sense of unease. Click here to see a gallery of images for the clashes. 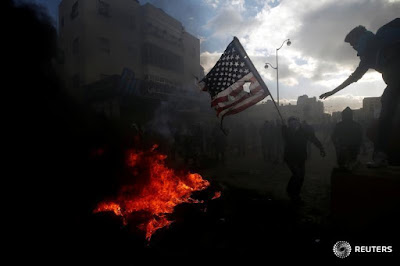 A Palestinian protester prepares to burn a U.S flag during clashes with Israeli tropps at a protest against U.S President Donald Trump’s decision to recognise Jerusalem as the capital of Israel, near the Jewish settlement of Beit El, near the West bank city of Ramallah, December 7, 2017.   REUTERS/Mohamad Torokman

It would be quite easy to scroll quickly past images of a funeral from the West Bank, they are, after all, not rare; but I never do. I take time to look at them all. I study the faces of the dead and the faces of those mourning. Sometimes I am captured by a picture’s moment and transported to the funeral. For me Abed Omar Qusini’s picture is one such example. The harsh light picks out the face of the pallbearer, the angst on his face obvious, the hand then points you back to the dead from the shadows. You are led back along the red, white and green of the flag into the shadows of the crowd of mourners, who are slowly shuffling from right to left. Then, caught in the light on the far left, a surprise, a new life. 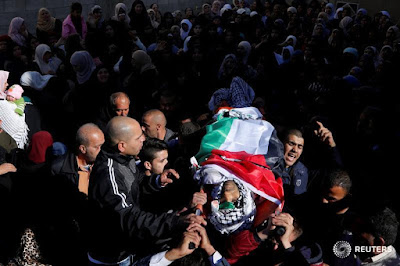 Mourners carry the body of Palestinian man Mahmoud Odah during his funeral in the West bank village of Qusrah December 2, 2017.   REUTERS/Abed Omar Qusini

Walking slowly through the dust created by a shelling a boy rubs his face in a picture almost entirely drained of colour. I could have chosen images of the dead being dug out of rubble or the injured being carried but this picture by Bassam Khabieh, for me, portrays a feeling of exhaustion, loneliness and isolation, for me a visual interpretation of the rebel held enclave of Ghouta. 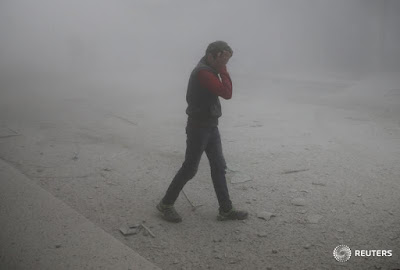 A boy is seen during shelling in the town of Hamoria, eastern Ghouta in Damascus, Syria, December 3, 2017. REUTERS/Bassam Khabieh

A striking portrait of a man accused of being an ISIS bomber is seen through a complex web of vertical and horizontal black lines and shadows created by the cell bars. What for me really makes Muhammad Hamed’s image very intriguing are the dark and shadowy figures that surround the man who stands in strong side light looking directly at you. Is this the face of a member of an organisation that has created so much fear, destruction and terror or is he innocent and wrongly accused? The alleged crime; setting off a car bomb that killed six people and injured many others in a refugee camp on the Jordan Syria border. 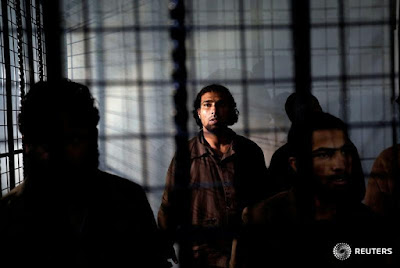 Five Syrians, accused of facilitating the Rukban bombings in June 2016, react during their trial at the state Security Court in Amman, Jordan, December 4, 2017.  REUTERS/Muhammad Hamed

In a scene that looks like something created in Hollywood Thaier al-Sudani captures a wonderful business as key members of the Iraqi government meet with Russian oil magnates. All suited and booted they walk as if in carnival parade, their matching white helmets and red lanyards making them appear like soldiers, a troupe of dancers or victorious members of a football team leaving the field of play. A question I have; is the man on the left very tall or is his size an optical illusion? If he is in the foreground why does the man on the right appear smaller than him? If you look at the man on the right his feet he is nearer to the photographer and therefore should appear bigger? I let you think about that. 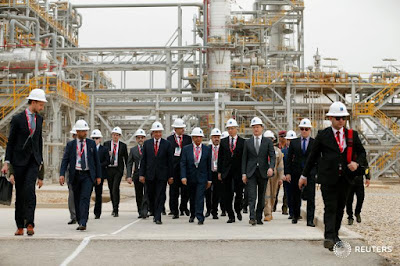 In Amr Abdallah Dalsh’s football picture I think we all know what is being thought by the sportsmen in the picture; Emilano thinking ‘Please no! Please! Please no! And the referee Malang is thinking ‘No chance son, I’m not interested, move along here’. The picture is perfectly timed, the praying hands, the one eye wide open staring past the hand that lifts the whistle that’s just about to touch the referee’s lips. Wonderful and no doubt a microsecond later the shrill sound of the whistle and the moment, that Amr has frozen in time, broken. 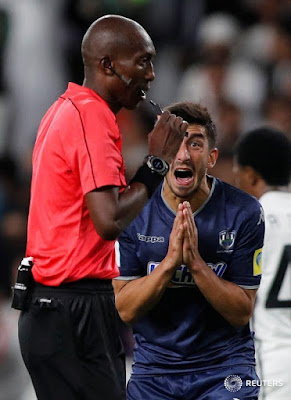 Something that never fails to intrigue me is how a small part of a picture can change the feel of an image as a whole. In Mohammed Al-Sayaghis picture of fighters attending a funeral we first look at a scene of men brandishing their weapons and shouting, what we can assume, are slogans of retribution and oaths of undying revenge for their fallen comrade in front of a mosque, an angry and aggressive picture. What softens the mood is the man on the right doing a selfie. It seems to me that he is not capturing the funeral for prosperity, historical documentary or potential propaganda; he is capturing himself, for himself. 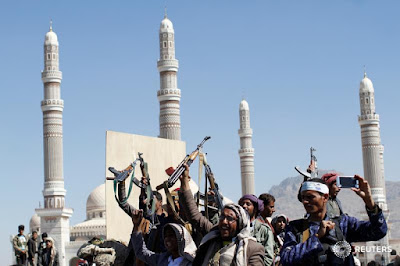 Houthi fighters attend the funeral of their comrades who were killed during the recent clashes in Sanaa, Yemen December 7, 2017.   REUTERS/Mohammed Al-Sayaghi

Although taken last March but only published this week as part of a special report is would be hard for me not to include Luc Gnago's picture of what appears to be two men on a white cloud looking at darken clouds in the skies. Personally I might have been tempted to crop it to remove the brown earth at the bottom of the frame, but the dark tone does help to balance the composition against the dark skies. Either way a fun and gentle image. Click here to see the rest of Luc's pictures and the special report about Monsanto. 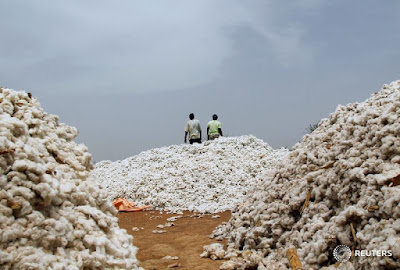