A happy New Year to you. I will continue to share my thoughts in 2018 on some pictures from the Middle East and Africa that have caught my eye. They may not be from the top news stories in the region but they would have caught my eye for some reason or another. You may agree or disagree with what I see in these images and the reasons I chose to highlight them but these thoughts are my personal view. At the very least I hope you enjoy the pictures that may have been missed in tsunami of images from a very busy news region.

I could not let the week go by without highlighting Maheder Haileselassie’s beautifully composed and balanced picture taken on the 5th January but moved now. I just love the zigzag of the tops of the building against the blue skies and the way shadows cast on the warm toned walls of the building take your eye to the robed monk striding from the church. And, although it’s a bit late, I’ve added two additional images from Lalibela taken by Tiksa Negeri for you to enjoy too. 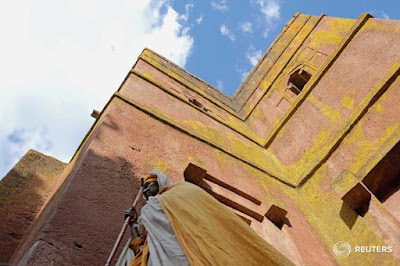 A monk walks out of Bete Giyorgis Church ( St. George’s Church) that is considered to be one of the eleven rock-hewn churches in Lalibela, Ethiopia January 5, 2018.  REUTERS/Maheder Haileselassie 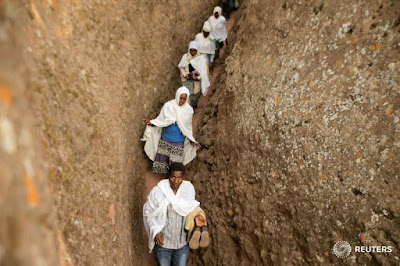 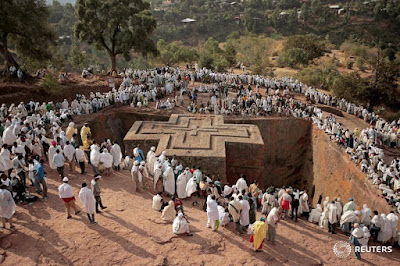 A simple backdrop for a portrait series by Afolabi Sotunde makes for a gentle and affectionate visual journey. It is beautiful in its rough and ready feel, and I get a real sense of the personalities of the people we meet, who barter goods in their refugee camp. I don’t think we’d get this feeling of closeness if the backdrop and lighting were uniform. Maybe you disagree, but look here on the Wider Image for the whole story and make up your own mind. 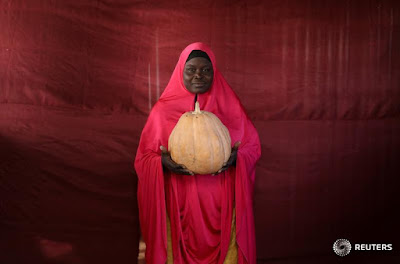 All the compositional lines in this image direct you towards the face of dead protester Mosab al-Tamimi in Mohamad Torokman’s funeral picture. The bird’s-eye view creates a feeling of falling into the image, your eyes crash into the youthful face and the yellow flower placed by his cheek. The mourners fan out from the body as it is carried from the arched building. Slowly your eyes come back to the portrait that rests on a Palestinian flag, a face circled by a pink and orange wreath. I cannot escape a feeling of sadness at this loss of a young life. 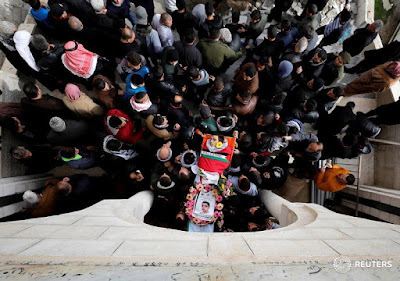 Mourners carry the body of Palestinian Mosab al-Tamimi during his funeral near the West bank city of Ramallah, January 4, 2018.   REUTERS/Mohamad Torokman

A clean black background, a bright red, white and blue flag, great human shapes and a strong back light all come together in a special moment for Thierry Gouegnon during election celebrations in Liberia. The curve of the flag, frozen before it envelopes the figure reaching up in celebration, brings the viewer’s eye from the rear of the picture forward to the sweat-covered man celebrating in the heat of the night. 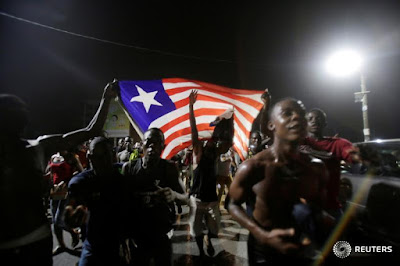 Supporters of George Weah, former soccer player and presidential candidate for the Coalition for Democratic Change (CDC), celebrate after the announcement of the presidential election results in Monrovia, Liberia, December 28, 2017.  REUTERS/Thierry Gouegnon

In very much the same vein as Thierry’s image above, I love the bright colours against a black night sky in Mohamed Nureldin Abdallah’s Independence Day celebration picture. The focal point of the picture, the blue robes of President Al Bashir, is squeezed into the frame by the reds in the foreground, demanding that you look at him. If you give yourself time while you look at the back of the picture, you will be rewarded by the playful sight of dancers and musicians entertaining the guests. Such a busy and bright picture. 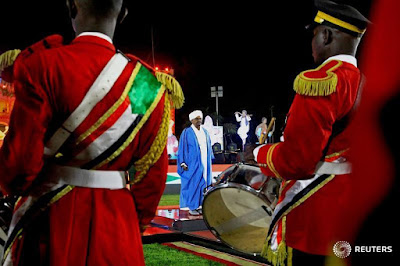 A fleeting moment of strong light and action is captured in perfect combination by Ammar Awad as children play in the evening light. The only horizontals in a composition of strong diagonals are the outstretched arms of the boys, who seem to be in a race against the visual left-to-right sweep of the sunlit wall and the clouds in the sky. The dark foreground echoes the lines of the track and the wall, adding emphasis to the diagonals. 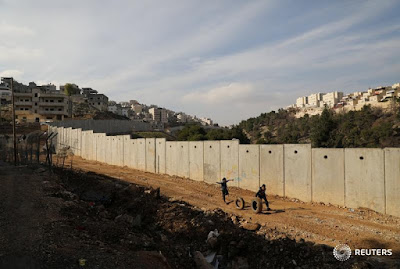 Children roll tyres as they run alongside the Israeli barrier in East Jerusalem refugee camp of Shuafat, January 3, 2018.   REUTERS/Ammar Awad

Drained of virtually all colour, Bassam Khabieh’s picture of destruction in Misraba stands out in monochromatic starkness. Your eye goes quickly to the small figure walking on the rubble, the only real recognisable shape until you are slowly drawn out to see the remains of a crushed vehicle. 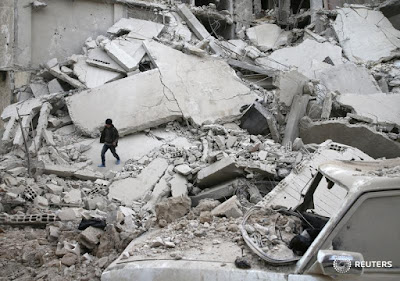 A boy walks on rubble of damaged buildings after an airstrike on the Eastern Ghouta town of Misraba, Syria, January 4, 2018.   REUTERS/Bassam Khabieh