The clashes on the Gaza border have generated many striking pictures this week. It was hard to isolate just one so I have chosen three. Suhaib Salem’s picture is so sad that it’s almost painful to look at. The woman appears to be holding on to the doorway as if it’s the life of Hamdan himself, refusing to believe he is dead. The mourners behind her are pulling her gently and firmly back to the truth and the realisation that he is dead and nothing will bring him back, no matter how hard she clings to the doorway. More pictures can be seen here . 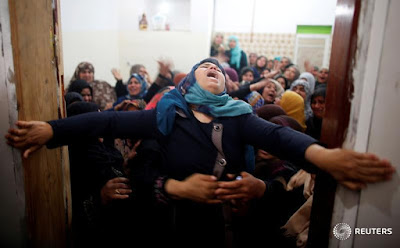 Mourners hold back a relative of Palestinian Hamdan Abu Amshah, who was killed along Israel’s border with Gaza, during his funeral in Beit Hanoun own, in the northern Gaza strip March 31, 2018,   REUTERS/Suhaib Salem

There is no mistaking the anger in Ibraheem Abu Mustafa’s picture as Palestinians confront Israeli troops in what looks like a scene from a battle from a bygone age. The landscape, like the protesters’ clothes, is blackened by smoke from burning tyres. The burning grass of the scorched earth draws your eye to the fire, and to the raw fury in the face of the protester. 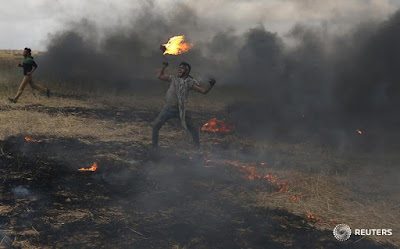 A Palestinian holds burning material during clashes with Israeli troops at the Israeli-Gaza border, in the southern Gaza strip April 3, 2018.    REUTERS/Ibraheem Abu Mustafa

I can’t help thinking of images showing lines of troops facing each other on an agreed field of battle in an ancient conflict when I look at Amir Cohen’s picture. The faint puff of smoke from tear gas looks like cannon fire, with the tents of the combatants ranged in background. This battle was no less fatal for some. 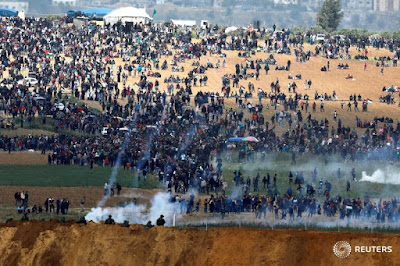 Israeli soldiers shoot tear gas from the Israeli side of the Israeli-Gaza border as Palestinians protest on the Gaza side of the border, March 30, 2018.   REUTERS/Amir Cohen

"I was 300 metres away from the fence. Those youths were calling to other young men, urging them to come forward in order to cross the border fence", Salem recalls. "The whole place was covered in heavy smoke rising up from the many tires that had been burnt. They cam close to each other, in excitement. In the background Israeli fired heavy tear gas, and tried to extinguish the burning tires. I knew it was a good picture, and a strong one, the moment I saw the scene." Read on here. 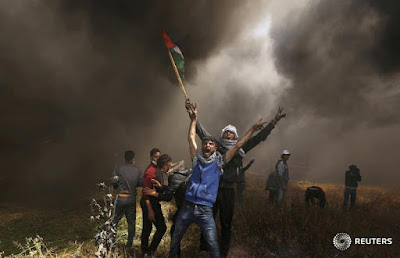 Palestinian protestors shout during clashes with Israeli troops at a protest demanding the right to return to their homeland, at the Israeli-Gaza border esst of Gaza City, April 6, 2018.  REUTERS/Mohammed Salem

Sometimes a simple, posed illustrative picture serves well not only to tell a story but to give a sense of the scale of the object being photographed. This is true in Abdullah Dhiaa Al-Deen’s picture of a diorama from the conflict in Iraq. The exquisite details of the model are lifted by being set against a clean background, with the scale of the model determined by the arm and hand of the model maker. This affectionate story of a soldier recovering from trauma can be seen here. 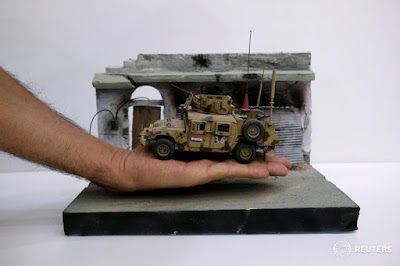 A difficult crop choice for Siphiwe Sibeko for his cricket picture. Does he go for the wider shot that shows Elgar at full stretch catching the ball, although his feet are cropped out and the ball is a little lost. Or does he crop in tight so you lose the flow of the body but you quickly get to see the hands perfectly poised to catch the ball? 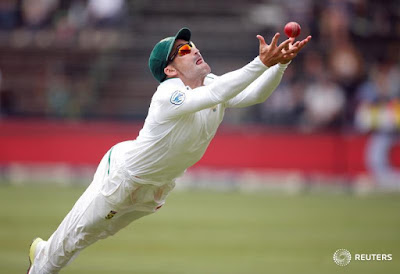 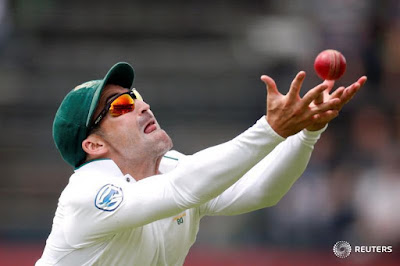 At funerals and memorial services you often hear the phrase “celebration of life” used to describe what is often a sad occasion. Siphiwe Sibeko’s picture is just that, a celebration of Winnie Mandela life. I so want to hear what these women are singing. Their faces emanate beauty, strength and joy, their hands and arms moving to the rhythm of their song. I come away feeling hope after looking at this picture, so thank you, Siphiwe. More pictures here. 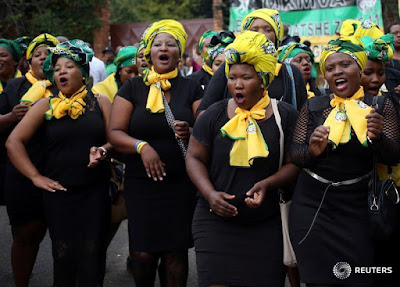 I could not resist adding Ulli Michel’s wonderful iconic image of the release of Nelson Mandela as maybe this is what the singers are actually celebrating, the hard-fought freedom from apartheid. 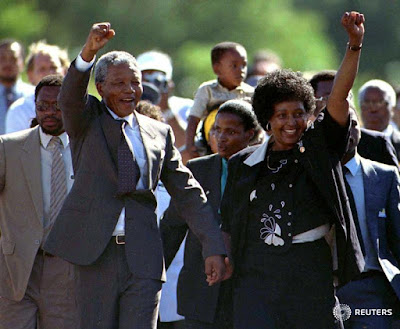 Nelson Mandela, accompanied by his wife Winnie, walks out of the Victor Verster prison, near Cape Town, after spending 27 years in apartheid jails, February 11, 1990.   REUTERS/Ulli Michel

A little bit of luck for Ammar Awad changes a nicely framed picture into something a little bit special. A flash of light from a phone camera as a worshipper gazes upwards, arms open in prayer, adds an unexpected element that could never be anticipated, especially when shooting pictures in the Church of the Holy Sepulchre. 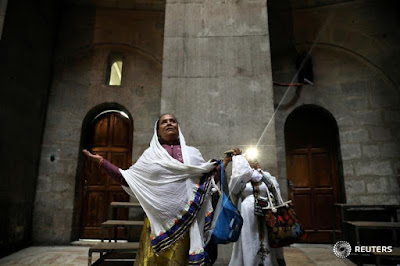 Worshippers pray in the Church of the Holy Sepulchre in Jerusalem’s Old City during the traditional Washing of the Feet ceremony April 5, 2018.   REUTERS/Ammar Awad

The conflict on the Israeli-border continues to throw up eye-catching images and none more so than this bizarre picture by Ibraheem Abu Mustafa. I can’t imagine why you’d dress up as Tweety Pie, ask your friend to dress up as a clown and then head off to clashes. What troubles me more is why you would not wear shoes. If the motivation was to draw attention to the border clashes it certainly does so, with a heady visual mix of flames, smoke, scorched earth, a masked protester beating a make-shift drum, and two people in cartoon character costumes. I am not sure what message this conveys and I suppose it’s this chaos that attracts me to this wonderfully strange picture. 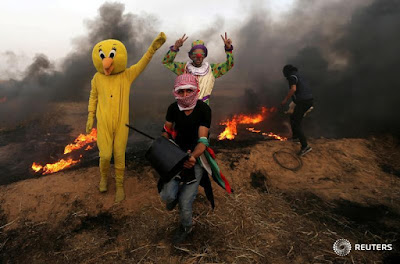 Palestinians wearing costumes are seen at the clashes on the Israeli-Gaza border in the Southern Gaza strip April 5, 2018.   REUTERS/Ibraheem Abu Mustafa

Although Mike Hutching’s picture was shot in January, it was only moved to the wire this week to illustrate the water crisis in Cape Town. I must admit I’d always rather have person in a picture but there is no escaping the brutal beauty of this image. The low sun casts warm yellow light on the stones in the foreground as well as deep shadows that emphasise the cracks in the dried out reservoir bed. Your eyes race along these cracks to the blue horizon, not a drop of water in sight. A terrifying picture of pending environmental disaster. 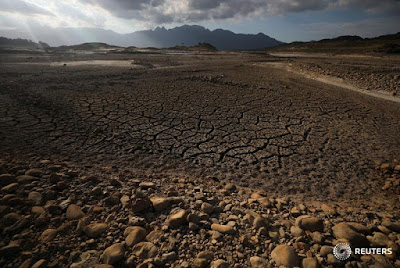