First, words of congratulation to our colleagues in Asia for their Pulitzer Prize last week. Reuters won two prizes in Feature Photography and International Reporting. Adnan Abidi, Mohammad Ponir Hossain, Hannah Mckay, Cathal McNaughton, Damir Sagolj, Danish Siddiqui and Soe Zeya Tun won the prize for their work on the coverage of the Rohingya people fleeing to Bangladesh. The pictures can be seen here. 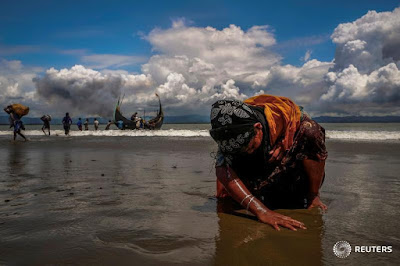 An exhausted Rohingya refugee woman touches the shore after crossing the Bangladesh-Myanmar border by boat through the Bay of Bengal, in Shah Porir Dwip, Bangladesh, September 11, 2017. REUTERS/Danish Siddiqui


A very simple picture by Essam Al-Sudani tells the story of violent amputation in Iraq. I am overwhelmed by the feeling of sadness, maybe created by the beautiful light that falls on the plastic hands and arms. I can’t help thinking that every prosthetic limb tells a tale of a ruined life. Strangely, the big clunky watch, which slightly detracts from the overall shape of the picture (imagine this picture without the watch) gives just a glimmer of hope through its ordinariness. Full story here. 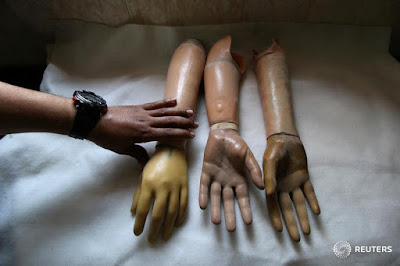 I hope that Ali Hashisho’s picture warms you the way it does me. It would be easy to overlook this at first glance as the light is little harsh, there are the rear lights of a bus in the bottom right of the frame and really it needs just a little crop to take the bus out and some of the foreground – maybe? What I like about this picture is the timing of the centrally placed cyclist and the man walking in the opposite direction, his legs at full stride. I have done a crop for you to judge for yourself. What I also like is that ordinary commerce is coming back to Douma. A little explanation about the phrase ‘during a media tour’ in the caption, Ali was taken to Douma under the control of the government and would have been limited as to what he could and could not photograph. 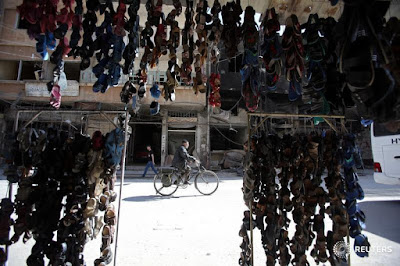 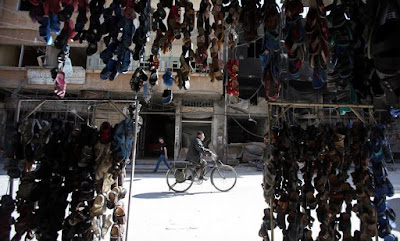 A cyclist is seen through the entrance of a shoe shop during a media tour in Douma near Damascus, Syria, April 23, 2018.    REUTERS/Ali Hashisho


Your eye just crashes into the centre of Suhaib Salem’s emotional picture of a boy weeping at a funeral. The body language of the covered women, the eye line of the woman on the right, the shadows on the wall, the hand coming in from the bottom right and the fingers cupped around the boys face all lead me to his closed eyes. To me the boy’s grief looks uncontrollable, I get the sense he just doesn’t want to open his eyes because if he does he will know the death of his family member is real and inescapable. 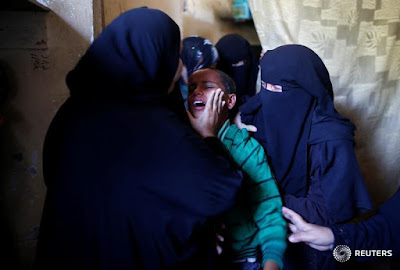 Relatives of deaf Palestinian Tahreer Wahba who died of the wounds he sustained during a protest at the Israeli-Gaza border, mourn during his funeral in Khan Younis in the southern Gaza strip April 23, 2018.    REUTERS/Suhaib Salem

Looking at Amr Abdallah Dalsh picture I can’t help thinking of Dick Whittington and his Cat and the promise that London’s streets are paved with gold. Turned out for young Whittington that the streets were in fact dirty and poverty stricken. Looks to me that at least on the face of it old Cairo offers more promise than 14th century London. What wonderful colours and what a great X composition in Amr’s picture. 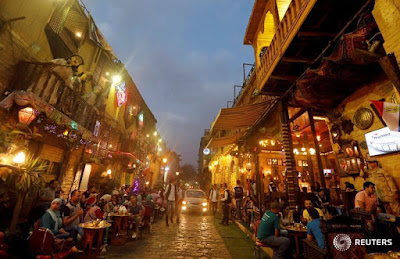 
Steve is a hard worker and we know that because Nieri Mwangi picture shows him head down, arm muscles tensed pulling containers of water in the rain, through the busy streets, his cart clearly labelled STEVE.  You would not believe it looking at the rain and wet streets in this picture but many parts of Nairobi only have tapped water two days a week. Steve is working hard to make up the shortfall. I love the power and energy in this picture of daily life and can’t resist the fact that his Wellington boot is just an inch off the ground. 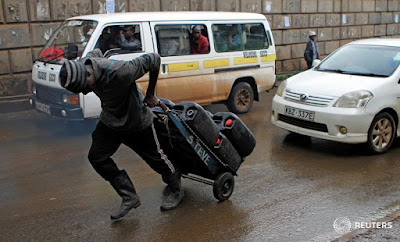 A man pulls a hard cart loaded with Jerry cans of water through the traffic in downtown Nairobi, Kenya April 19, 2018.    REUTERS/Nieri Mwangi


A striking and thoughtful picture by Amir Cohen to illustrate the aftermath of a flash flood. A combination of quick thinking, a lucky break with lightning strikes and a well thought-out angle on the curve of the road for this time exposure work together to create this eye-catching moment. At first I did not like the chevrons and experimented with a crop but I am now of two minds. You choose. 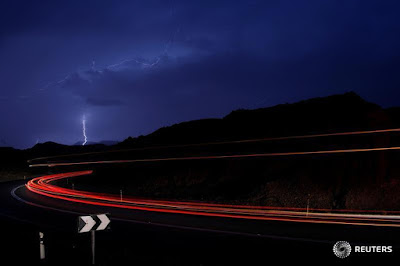 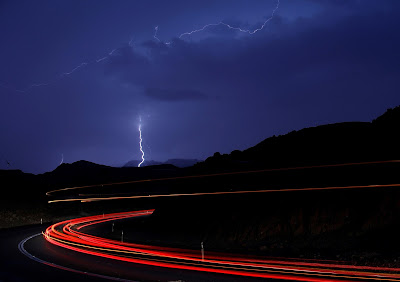 Cars are driven as lightning strikes near a site where a group of Israeli youths were swept away by a flash flood near the Zafit river bed, south of the Dead Sea, Israel, April 26, 2018.    REUTERS/Amir Cohen


The slightly bizarre always catches my eye so Youssef Boudlal’s picture easily finds a place in this week’s selection. I love the sense of the march of the mannequins from left to right in this strongly composed image made up of triangle after triangle, from the shapes of the building to canopies in the background and the open space on the bottom left. What I love too is the real figure who, to me, seems to be hiding in the shadows, waiting the march of the ‘undead’ headless mannequins to pass by. 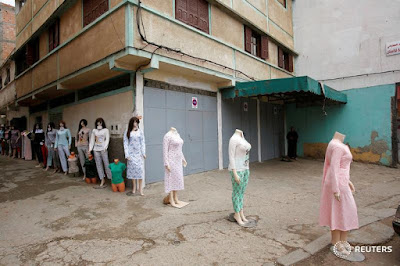 Mannequins displaying women’s clothing for sale are lined up in the street at the market in Ouled Moussa district on the outskirts of Rabat, Morocco, April 24, 2018.   REUTERS/Youssef Boudlal

And if you think you have had a hard day at work today have a look at this powerful picture from Ibraheem Abu Mustafa, it should make you feel better. 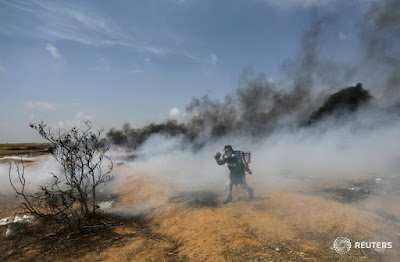 A photojournalist runs during clashes between Israeli troops and Palestinians at a protest where Palestinians demand their right to return to their homeland at the Gaza-Israeli border in the southern Gaza strip April 27, 2018.   REUTERS/Ibraheem Abu Mustafa