A Week in Pictures Middle East and Africa July 6, 2018

I have an ongoing love of pictures that are based around commodities and the infrastructure associated with this industry; oil, coal, wheat and mining all top of my list. Akintunde Akinleye's picture of oil workers, wearing matching orange boiler suits and yellow helmets, dwarfed by a rusting tank, the lines of the rust dicing the frame in a regular patten, the metal steps crashing diagonally across the warm toned picture is just wonderful. I like it too that all the workers seem to have taken a break from the work at hand to have their picture taken. 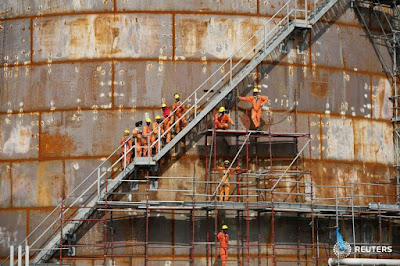 Construction workers are seen at an oil storage tank at the Dangote Oil Refinery under construction in Ibeiu Lekki district, on the outskirts of Lagos Nigeria, July 5, 2018.   REUTERS/Akintunde Akinleye

A clever use of shape, line and pattern by Khaled Abdullah gives this image a ‘robotic machine’ feel as the students, heads down and working hard, try to achieve their best. It took me a while to work out why I got this impression, but I think it’s a combination of the reds, whites and blues all regularly spaced, the pens all tilting at the same angle, and the students all with their left hands under their desks. 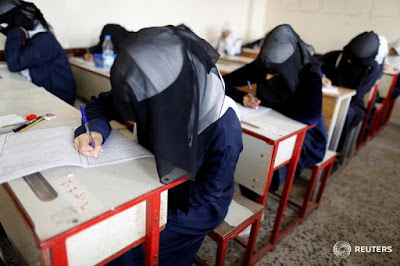 At first glance this picture is almost abstract and it takes a while to figure it out as you struggle past the bright reds and opaque blacks. Yasser Abu Al-Naia is cocooned in red and white and smothered in harsh black shadows, and hands reach up from the bottom of the picture to draw your eye to the 14-year-old’s face in Suhaib Salem’s powerful picture. Once you see that young face it’s hard to look away. I didn’t for a very long time. 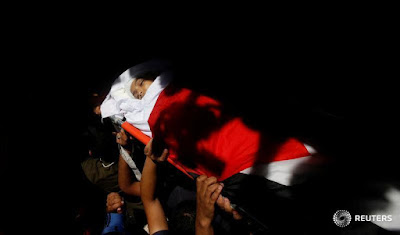 Mourners carry the body of 14-year-old Palestinian boy Yasser Abu Al-Naia who was killed by Israel forces during a protest at the Israeli-Gaza border, during his funeral in Khan Younis, the southern Gaza Strip June 30, 2018.    REUTERS/Suhaib Salem

One of the best things about being a news photographer is seeing events unfold in front of you, so you can take great pictures for the world to see. To do that you need to be in places that many cannot go to and that too is very attractive. Feisal Omar takes advantage of this opportunity to stand on a red carpet in front of a full parade of police on Independence Day to take a carefully composed picture balancing the red stripe of the carpet with the white lines on the ground. Shame the officer was just a few inches too far to the left of the carpet. 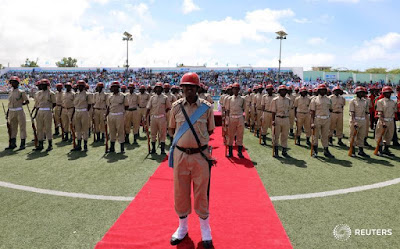 Beyond the immediate tragedy of Alaa Al-Faqir’s picture of a woman made homeless through conflict, I am struck that she is carrying a carpet that is almost twice as large as she is across a muddy field. Obviously, a prized possession to be carried to safety when she was forced to leave home, but strangely this image gives me a glimmer of hope. I sense that even though she was forced to flee she expects to build her home again with more than just essentials. But that said, it’s still a sad picture that raises many questions. 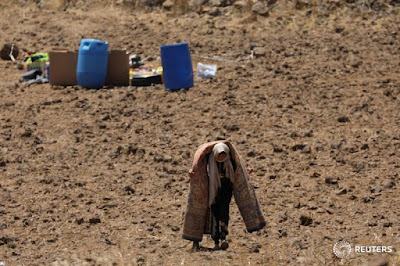 A woman carries a carpet on her shoulders near the Israeli-occupied Golan heights in Quneitra, Syria July 2, 2018.  REUTERS/Alaa Al-Faqir

The small demonstration of displaced Syrians in Ammar Awad’s picture is dwarfed by the zig zagging fence, security lines and slight shimmer of heat haze that surround them. The scene is compressed as it has been shot on a very long lens, and your eye is drawn to the white placards held by the protesters. Once there, you are trapped with them, your eye held fast by posts of the barbed wire fencing pointing at them, making it hard to look away. Read on here. 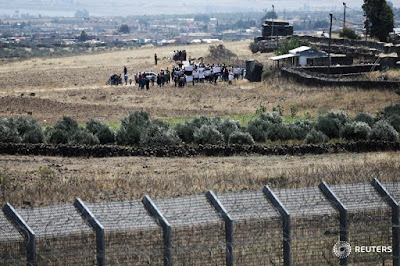 Internally displaced people in the Golan Heights protest near the border between Israel and Syria in an appeal to the UN and the international community to stop Russia from carrying out an offensive, as seen from the Israeli-occupied Golan heights, Israel July 4, 2018.   REUTERS/Ammar Awad

Mohamad Torokman produced a powerful set of pictures when police clashed with Palestinians, throwing up dust clouds around the struggling figures. This is a complex picture of twisting bodies and swirling limbs as people try to pull a woman away from the police. You have to fight equally hard visually to get to the focal point, through the almost monochromatic framing until you reach the centre of the picture. Hands and clothing stretched to tearing point, grimacing faces and the bright complimentary colour of green and reds. You can see more here 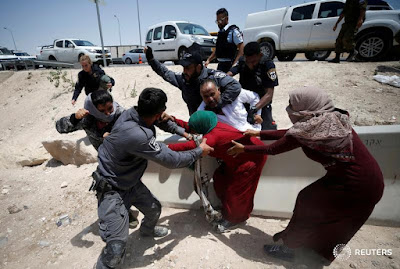 Israeli policemen try to detain Palestinians in the Bedouin village of Al-Khan al-Ahmar near Jericho in the occupied West Bank July 4, 2018.   REUTERS/Mohamad Torokman

Siphiwe Sibeko’s picture of demonstrators blocking roads with burning tyres is wonderful. You are immediately grabbed by the graphic shape of the circle of the black tyre surrounded by orange flames. What I like too is the position of the feet, the protester in full purposeful stride, and the picture brimming with energy. 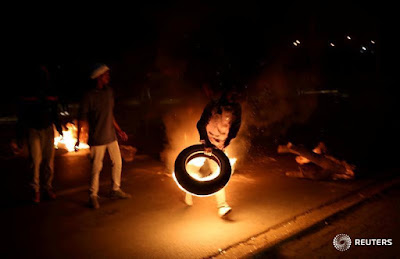 A man blocks a road with a burning tyre while protesting against electricity cuts in Klipspruit Soweto, Johannesburg, South Africa July 4, 2018.   REUTERS/Siphiwe Sibeko

A simple and affectionate picture of dancing men by Zoubeir Souissi caught my eye this week. The mood of the picture created by the slight tilt to the framing and the regular shape of the arches in the background that seem to bounce from left to right over the heads of the swaying, barefoot men. A final nice touch is the ‘halo’ around the head of the man in black in the centre of the image. 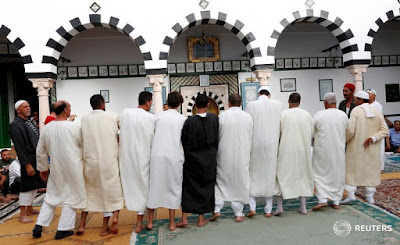