There is no escaping the feeling that Ronen Zvulun’s picture is more than a little bizarre. Five people dressed the same, sitting on what looks like a precipice, legs daggling into the abyss looking into Syria. Once you get past looking at the raised arms and wondering why they are doing that, your gaze is propelled to the far horizon through blue skies to a haze that might be created by the clashes near the border or could just be banks of cloud. 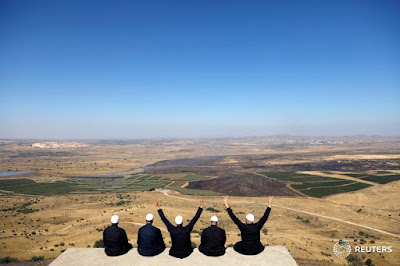 Israeli Druzes sit together watching the Syrian side of the Israel-Syrian border on the Israeli-occupied Golan Heights, Israel, July 7 2018.   REUTERS/Ronen Zvulun

Feisal Omar’s picture is a powerful news picture in a classic sense: it’s full of action and drama. Armed men rush through bomb-damaged streets; your eye races around the frame in confusion. Your attention darts from the coloured screen and reds and blacks of the tuk tuk, to the shadows and harsh vertical lines of the grey concrete building behind, back to the gunman on the left, and finally to the three men on the right, with their weapons held at the ready.  You can see the full sequence of pictures here. 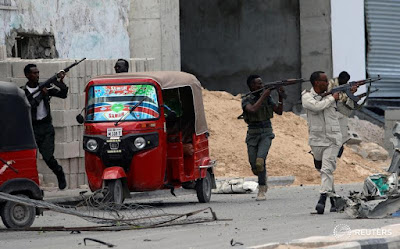 Alaa Al-Fakir’s picture is all about perseverance and determination. The small girl labors in the heat of the overhead sun at what seems her impossible task of pushing a wheelchair-bound elderly person over rough and barren terrain. The glimmer of hope I try to take from this picture of difficult struggle is the determination in the girl’s efforts. Using the full force of her body, she is not giving up: her legs are braced, head down and arms straight. She will succeed in helping this person less able than her. 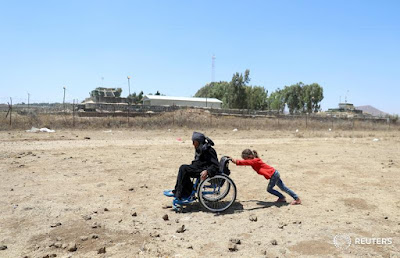 An internally displaced girl pushes a woman in a wheelchair near the Israeli-occupied Golan heights in Quneitra, Syria July 11, 2018.   REUTERS/Alaa Al-Fakir

When I look at the light and compositional structure of Ronen Zvulun’s picture I think of the American painter Edward Hopper . Warm and cold colours, strong lines and bold flat shapes fighting for equal amounts of space. The figure always perfectly positioned in the composition, but leaving us with the sense that they are slightly distant, divorced or uncomfortable, that they’d rather be elsewhere. 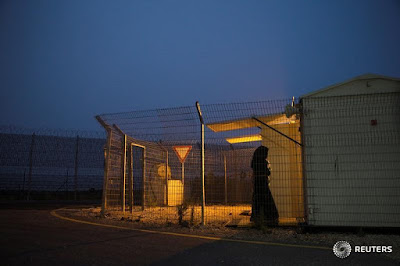 A Syrian woman holds a baby as she walks into a checking room just after they crossed the armistice line to the Israeli-occupied Golan heights to get medical treatment in Israel July 11, 2018.   REUTERS/Ronen Zvulun


I was impressed with Ibraheem Abu Mustafa’s picture from Gaza for complex reasons that I will explain. Often, he covers clashes and funerals but we also need to illustrate less visually rich news stories such as financial and complex political stories about longer-term trends. On this occasion the story was China’s growing economic influence in the Middle East. Not an easy one, not one to make immediate impact but certainly one to demonstrate sophisticated visual thinking. What would you take a picture of? When a customer searches ‘China Gaza’ to illustrate the political and economic of China’s role in Gaza this image will be found. It’s a ‘slow burn’ clever picture told by the words MADE IN CHINA on the box. 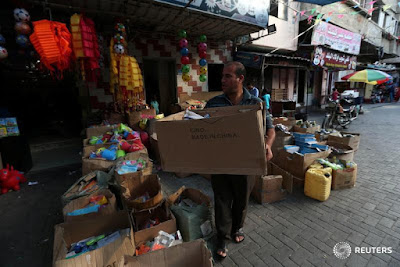 Two striking and thoughtful pictures from Sumaya Hisham to illustrate the ongoing turmoil at the energy company Eskom. I love the march of the pylons appearing over the hill like an alien army. With the washed out sky, the cold steel shapes seem to be wading  through what looks like a cold sea, an effect created by the horizonal lines in the grass. Read on here about the Eskom pay deal. 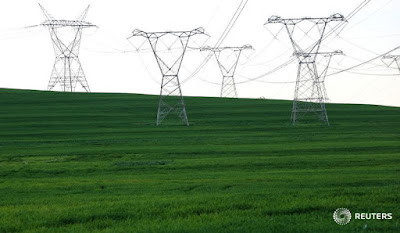 
And in Sumaya’s picture below I love the patches of cold blue of the cross painted in the door and the equally cold blue light in the two windows on the left countered by the warmth of the sky and the hot spots of the lights overhead. And both these pictures were used to match a financial story about pay negotiations between workers and a company. To produce such imaginative pictures from what is a relatively dry story is a mark of a great photographer. 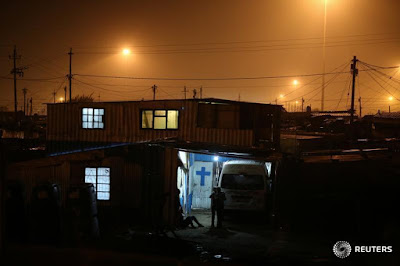 To describe Andreea Campeanu’s picture as ‘busy’ would probably be the understatement of the week. Your eye jumps from the red shirt of the barber, to the window highlight reflected in the mirror, back down the whites and blues of the customer’s shirt, up to the pattern on the ceiling, then down along the pictures of potential styles on the back wall, to the barber’s brush held and silhouetted against the mirror on the back wall. Finally, you come to rest on the gentle eyes and broad smile of the customer. It’s then you notice the next customer, seated, waiting in line, also reflected in the mirror. What an epic journey and all in such a small barber shop. 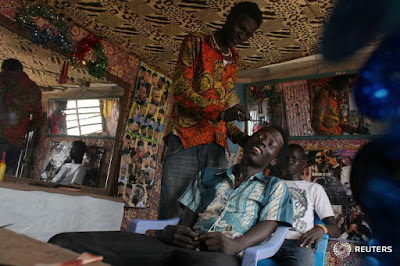