August this year is the 400th anniversary of the start of the slave trade to North America. To mark this date one of several stories Reuters is working on are artefacts from the slave period. Ancient things in cabinets rarely make for good images but one image that will haunt me, and not because I shot it (a rare thing these days) is the “Brookes” slave ship illustration. Using a narrow depth of field, I have tried to single out an individual packed on the boat with hundreds of others to humanize him. The details in the original drawing are spectacular. It’s as if every figure is a personal portrait and makes us feel as if we know them. If this was shot too wide the figures become unidentifiable, but too tight and you lose the sense of the vast numbers involved. Read on here. 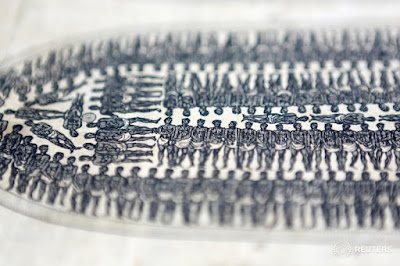 A section of a print of the Brookes Slave Ship diagram dated 1791 forms part of the collection in the Wilberforce House Museum in Hull, Britain, July 5, 2019. According to the museum the print is arguably one of the most recognisable images from the campaign to abolish the Transatlantic Slave Trade in Britain. The publication of this image provided the public with a clear visual representation of conditions on board slave ships for the first time. August 2019 marks 400 years when the slave trade to North America began.   REUTERS/Russell Boyce

Emerging from a hole dug by hand, a miner brings up a shovel of earth that may or may not contain gold. Zohra Bensemra’s picture is as compelling and compassionate as it is claustrophobic. Every element is there, the perfect shovel shape, the miner’s lamp on his head, the black and dangerous chasm, and, most importantly, the glimpse of determination in his eyes. But there is more to this than meets the eye and that is why it’s taken months to get this story out. The gold comes at a price -  Read on 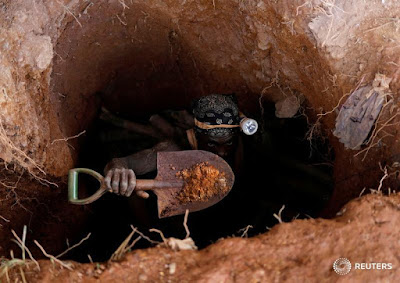 An Informal gold miner carries a shovel as he climbs out from inside a gold mining pit at the site of the Nsuaem-Top, Ghana November 24, 2018. Zohra Bensemra

Bloody and brutal with an eerie sense of isolation and silence. This is what strikes me most with Afolabi Sotunde’s image from the clashes in Nigeria. Why is this? Very rarely do you see a dead body in the street in complete isolation; there are usually emergency services, other demonstrators or even just bystanders, all usually part of the chaotic deadly scene. 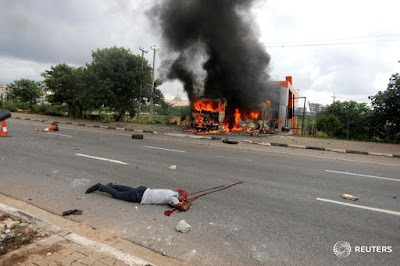 A member of the Shi’ite movement lies dead after a Shi’ite movement group set fire to an ambulance and fire engine station at the Federal Secretariat in Abuja, Nigeria July 22, 2019.   REUTERS/Afolabi Sotunde

Bold and simple, great shape, great colour and ‘mini me’ feel to James Akena’s portrait picture lifts it above the ordinary. If I were to be really picky I’d like Bobi to be a little smaller in the frame so you can see both the eyes fully in the image behind him, but I won’t be picky. 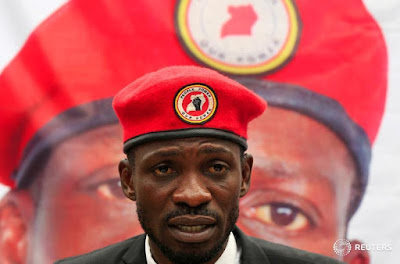 Just because I am a big fan of the quirky, where objects are in place but out of context -  cars in swimming pools, boats on roofs - I can’t resist armoured vehicles under cool blue water photographed by the Aqaba Special Economic Zone Authority. Find out why they are underwater here. 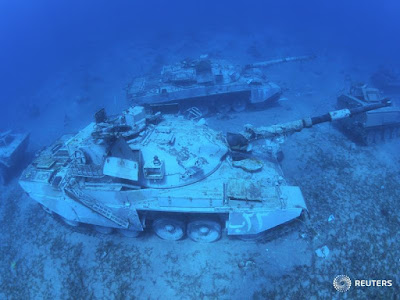 Jordanian Armed Forces vehicles lay on the seabed of the red Sea off the coast of southern port city of Aqaba, as part of a new underwater military museum, Jordan in this handout picture obtained July 23, 2019. Aqaba Special Economic Zone Authority/Handout via REUTERS

Ammar Awad’s mysterious image of smoke swirling around a building works as the window is just about the only sharp-edged shape you can see through the soft blur of smoke. This contrast creates a momentary focal point. If the picture had been taken a little earlier, the building would not be fully enveloped by the smoke, a moment later, the window would be obscured and the focal point lost. Palestinian building is blown up by Israeli forces in the village of Sur Baher which sits on either side of the Israeli barrier in East Jerusalem and the occupied West Bank July 22, 2019.   REUTERS/Ammar Awad

A great combination sequence picture by Mussa Qawasma from the same scene as Ammar’s picture above tells the same story but in a different way. Each element is perfectly captured. With the still images, every detail can be examined closely. For sure it would be great to see video of this, but then you would not be able to look at every detail closely, see what it looked like before, followed by the blast, the smoke and then the destruction. 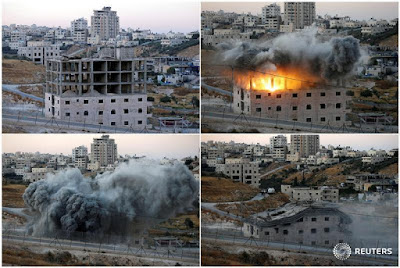 A combination picture shows a Palestinian building as it is blown up by Israeli forces in the village of Sur Baher which sits on either side of the Israeli barrier in East Jerusalem and the occupied West Bank July 22, 2019.   REUTERS/Mussa Qawasma

As far as the eye can see there are football fans surrounding the victory parade bus in Ramzi Boudina’s picture. Are the arms raised in adoration or is it that just about everyone is holding up a mobile phone to take pictures and shoot video. Either way it really doesn’t matter as what it does achieve is to make the bus take on the appearance of a boat slowly sailing away from white cliffs through a sea of waving arms. 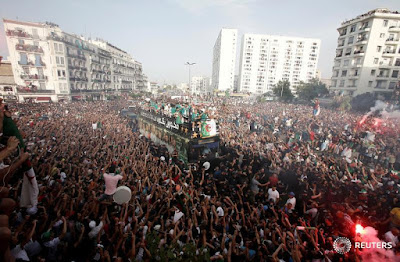