picture, with the open arms of the man being searched filling the clean background of the
cloudless blue sky. It also has a slightly bizarre feeling that highlights the tension of the
pat-down. What can you possibly find in such wide-open spaces that stretch to the far
horizon? I am sure there is sound reasoning behind this. Read on here. 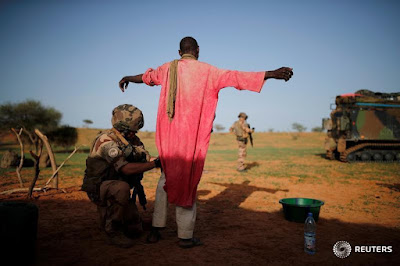 A French soldier of the 2nd Foreign Engineer Regiment searches a man during an area control operation in the Gourma region during Operation Barkhane in Ndaki, Mali, July 27, 2019.   REUTERS/Benoit Tessier

Baz Ratner’s image is completely abstract and we can only guess at what is depicted in
the eye-catching swirl of hot red, orange and blacks. No figures, no real shape and no
sense of scale but you can’t help but continue to look to make sense of it, being drawn in
deeper and deeper. Once you read the caption you find out what is going on. 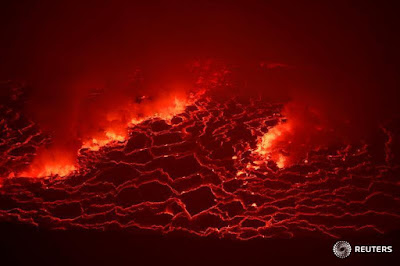 Lava is seen glowing inside the crater of the Nyiragongo volcano inside the Virunga national park near Goma in the Democratic republic of Congo August 9, 2019.   REUTERS/Baz Ratner

Continuing with the theme of abstraction and moving slowly to the figurative, Feisal
Omar’s image of sheep being led to market is a pleasing graphic image with a gentle
curved composition and a strong right to left sweep to it. 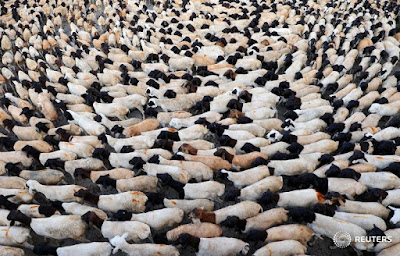 Sheep are seen at a livestock market ahead of the Eid-al-Adha festival in Mogadishu, Somalia august 10, 2019.    REUTERS/Feisal Omar

All good things come in threes so I had to complete the abstraction set with Muhammad
Hamed’s star-lit sky. The figure on the rock outcrop using a light gives us a single focal
point that both the previous images didn’t have. What has struck me is just how
comforting this focal point is and how - when it’s lacking from an image - it is missed
even if the image is strong in its overall design 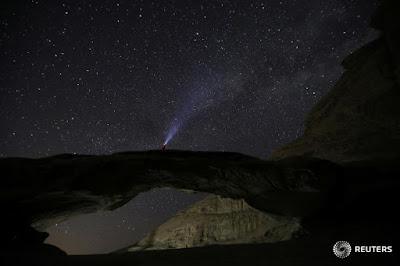 A man watches the stars seen in the skies over Al-Kharza area of Wadi Rum in the south of Amman, Jordan July 27, 2019.   REUTERS/Muhammad Hamed

A powerful and angry picture by Ammar Awad. Two policemen moving through a crowd
of struggling security forces and protesters are momentarily circled by the movement
throughout the image. The dark shapes of the uniformed men are harsh against the
pavement and the drift of tear gas, their weapons a stark focal point of the image. If the
circular composition is not enough to lead your eye to the police in the centre, the hand in
the foreground points the way. 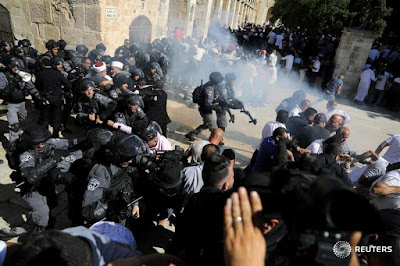 Israel police clash with Palestinian worshippers on the compound known to Muslims as Noble Sanctuary and to Jews as temple Mount as Muslims mark Eid al-Adha in Jerusalem Old City August 11, 2019.    REUTERS/Ammar Awad

Amir Cohen’s picture is one of those images that leads you in layer after layer like a
stage set. You start with the hooded figure on the left and his book, then across to the
man in the peaked cap and his book on the right, then down to sleeping man centrally
placed and next to him another man deep in concentration in his book. All set against a
wonderful backdrop of the ancient and yellowed wall. 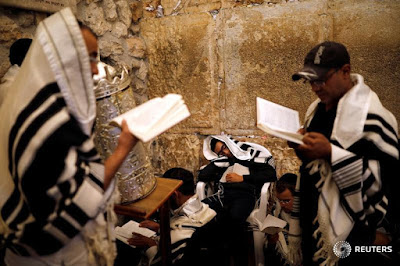 Jewish worshipers pray on the Tisha B’Av, a day of fasting and lament, that commemorates the date in the Jewish calendar on which it is believed the First and Second temples were destroyed, near the Western Wall in Jerusalem’s Old City August 11, 2019.   REUTERS/Amir Cohen

Umit Bektas’ image looks like a bas-relief of white-robed figures on a rocky foreground
against a jet-black sky. The picture is drained of almost all colour and the eye is led to the
back of the image through the ever-decreasing size of the figures, which are dotted about
equally in space from foreground to far distance. This visual impression works only
because almost all the figures are uniformly clad. 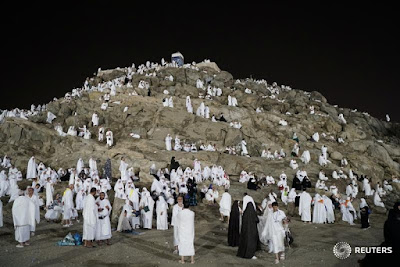 Muslim pilgrims gather on Mount Mercy on the plains of Arafat during the annual Haj pilgrimage, outside the holy city of Mecca, Saudi Arabia August 10, 2019.    REUTERS/Umit Bektas

A very brutal image by Philimon Bulawayo from the clashes in Harare that raises many
questions. A woman lies unconscious as a red-booted, baton-holding, policeman looks
down at her as he strolls by. The viewer may leap to many conclusions. Is she dead? I
checked with the photographer and was told no, she is okay. The body language appears
so aggressive and as an image is as powerful as the violence that led up to this scene. 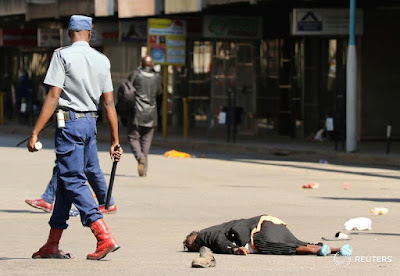 A policeman walks past a woman injured during clashes after police banned protests over austerity and rising costs called by the opposition Movement for Democratic Change (MDC) party in Harare, Zimbabwe, August 16, 2019.  REUTERS/Philimon Bulawayo