At first glance Mohamed al-Sayaghi’s picture looks like the confused scene from some sort of blast or explosion, but it’s not. You are drawn into the image through the chaos, eyes searching out the focal point of the white flour sacks on the ground. Deeper into the image you make out the side of the truck, laden with dozens of sacks and then you finally see the men at work. They are disposing of sacks of flour that are considered expired or contaminated, in a country that faces areas of malnutrition. 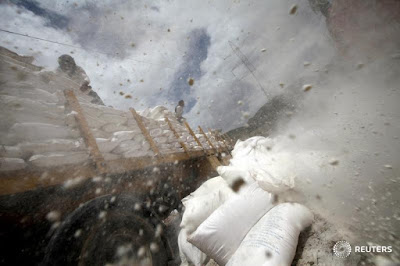 Workers dispose of sacks of wheat, provided by the World Food Program (WFP), which is reportedly expired, on the outskirts of Sanaa, Yemen August 28, 2019.    REUTERS/ Mohamed al-Sayaghi

Mohammed Salem’s picture is divided in two by the classic shape of an AK47 rifle cutting diagonally through the image of the funeral cortege of a Hamas security force member. On the right, comrades stand to attention with calm respect either side of the body and  you can just see the dead man’s face. To the left people reach in to try to take pictures with mobile phones. A picture that reflects the confusion surrounding the death of this soldier in a bomb blast in Gaza, and that carries echoes of the internal division within Gaza. 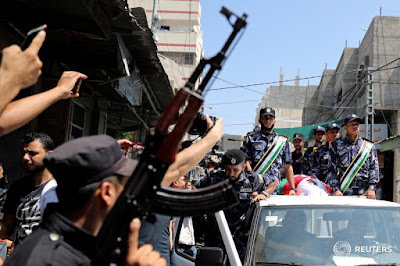 Members of Palestinian Hamas security forces carry the body of their comrade Salama Al-Nadeem during his funeral in Gaza City August 28, 2019.  REUTERS/Mohammed Salem

Two days earlier Mohammed Salem was illustrating the power cuts that Gaza is facing. With an image that is almost totally black Mohammed teases with just enough detail to let the viewer know this is in a narrow street with people trying to go about their business. There is a hint of sky squeezed between darkened buildings. A distant figure walks through the only pool of light of the ground and a figure stands in a light that illuminates his face and arms as he chats with a friend who reaches out to him. 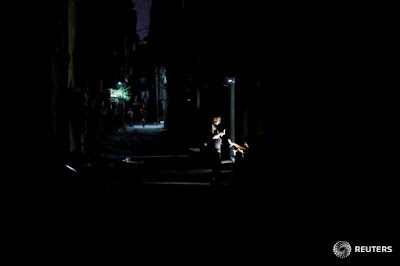 Palestinians use their mobile phone torches during a power cut at the Al-Shati refugee camp in Gaza City, August 26, 2019.   REUTERS/Mohammed Salem

What is most striking about Khalid a-Mousily’s image is the uncertain look on the boy’s face on the left of the picture and how the composition of the image leads you back to him. Although initially you are quickly drawn away from his face by the visual noise of the red and white flowers, the grieving man on the right and the centrally placed man with his head in his hands, the flow and shape of the design takes you back to the boy. His face shows a mixture of emotion:  he’s confused, concerned and frightened at the same time. 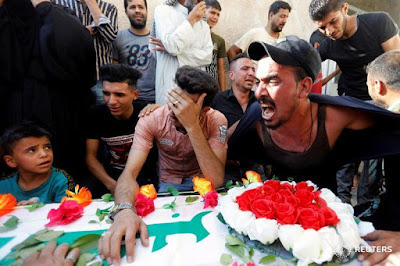 Relatives of Kazem Ali Mohssen, a brigade commander of the Popular Mobilisation Force, who was killed by an attack from an unmanned aircraft close to the Syrian border in Anbar, mourn during his funeral in Baghdad, Iraq August 26, 2019.     REUTERS/Khalid al-Mousily

Alaa al-Marjani’s picture has a bittersweet feel to it. Every compositional point and edge has been slightly cropped off and I feel cheated as I instinctively want them in frame. The bottom edge and point of the woman’s dress is just out of frame, the decoration at the top of the image is neither in nor out, I even want the lines of the carpet to flow exactly into the corners of the frame, but they don’t. But what a wonderfully complex image this is, bold shapes of flat black tones arranged around the warmth of the rich brown doors; complex and beautiful gold and silver script all divided up in a classic thirds format and squeezed just in. 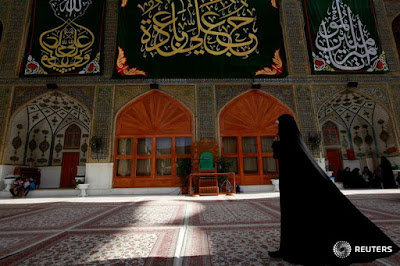 An Iraqi woman is seen at the Imam Ali shrine at the holy Shi’ite city of Najaf, Iraq, August 23, 2109.   REUTERS/Alaa al-Marjani

A gentle visual smile from Thomas Mukoya as he illustrates the census in Kenya by using a mirror in one of the homes to double the number of people in the image. The illusion is a little harder to detect as the mirror line is not central. 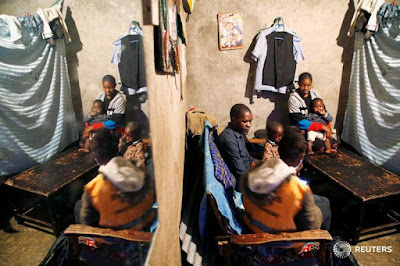 An enumerator uses a census laptop to record details of a family participating in the 2019 Kenya Population and Housing Census in the Kibera slum in Nairobi, Kenya August 24, 2019.   EUTERS/Thomas Mukoya

Underexposed, flare in the lense, no people in the image and very little colour. On paper,  Afolabi Sotunde’s picture should not work but it does. As part of a series of picture stories to mark the 400th anniversary of the start of the slave trade from Africa to North America this intriguing image is from one of the many historic sites associated with the trade. Although it has a faint feeling of hope it is tinged with sadness. As your eye moves from the single, almost derelict hut and away from the line of trees under a cool sky you finally notice the gentle roll of the waves of the Atlantic Ocean. Once you notice this you can almost hear the waves in the still air, giving you time to reflect on what happened here 400 years ago. You can see the full story here. 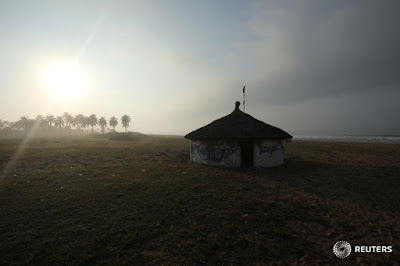 A shrine is seen on a beach where thousands of African slaves were once loaded onto ship in the historic slave port of Ouidah, Benin, July 17, 2019.   REUTERS/Afolabi Sotunde

I can’t help feeling a little uncomfortable as it dawns on me that of Fawaz Salmon’s picture from Yemen has similarities with a picture of a big game hunter standing, foot on kill. Death, pride and destruction all captured in one frame. A fighter stands, foot on vehicle, as a fuel tanker with a burned-out cab burns in the background. At his feet a man holds up a two-finger salute of victory. 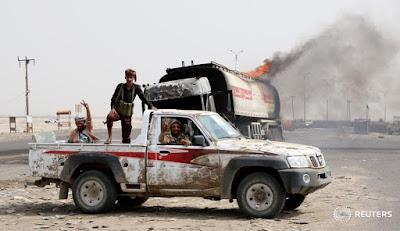 From the mists of time in my head comes the Flanders and Swann 1950’s Hippopotamus song “Mud! Mud! Glorious mud, nothing quite like it for cooling the blood” and I am delighted by Abdullah Rashid’s picture. Cool blues and greys take any heat from the picture as people enjoy the water and therapeutic muds of the Tigris River very much like the imaginary hippo cooling itself in the song. Go on Google it if you don’t know it, it will make you smile. 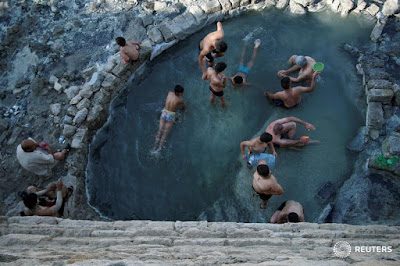 People sit in water after being covered with mud, which is reported to help treat skin diseases, on the banks of the Tigris River west of Mosul, Iraq August 20, 2019.   REUTERS/Abdullah Rashid

Ronen Zvulun’s image of a man playing with a dog has a very edgy feel to me. You can’t quite see what the dog - and that is a big dog - is jumping up to grab in its mouth. The  man looks just a little apprehensive, but still keeps tight hold on his can of beer. It is a party after all. This all set against a graffiti background where the slow shutter speed seems to blur the letters and the shadows so we can’t quite get a firm visual grip on the details. It’s taken Ronen many weeks of shooting to get this story together, hence the January date on this image, but now it is released you can see it all here. 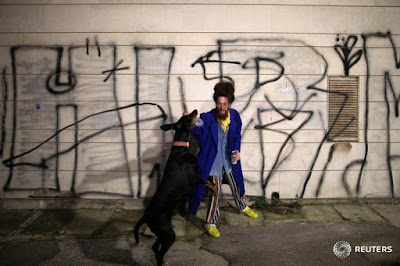 A man plays with a dog as a party takes place in a nearby basement, known as Strauss, that is occasionally used as a venue for underground parties in Jerusalem January 25, 2019.  REUTERS/Ronen Zvulun

The best smile of the week has just got to Baz Ratner for this wonderfully affectionate picture from Mozambique as the country prepares for the Pope’s visit. You just can’t grab enough visual joy from this image fast enough, that friendly toothless smile, the warmth of the tones created by the evening sunlight, the fizz of the cloth texture, colour and patterns and the corridor of the Baobab trees that lead you off to the horizon. All combined it makes you just want to visit. 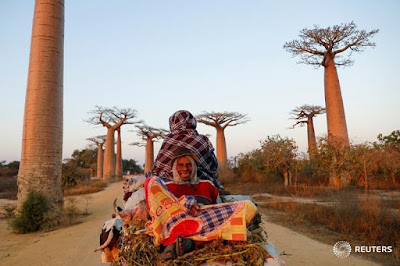 A man rides on the back of a cart pulled by a bull though Baobab alley near the city of Morondava, Madagascar, August 30, 2019.    REUTERS/Baz Ratner