A lucky accident for Siphiwe Sibeko, as I can’t imagine for a minute that this hand creeping into the frame was planned. The playful game with scale and perspective grabs you, giving the impression that a giant hand is reaching out to grab unsuspecting locals on their way home from a hard day at work. 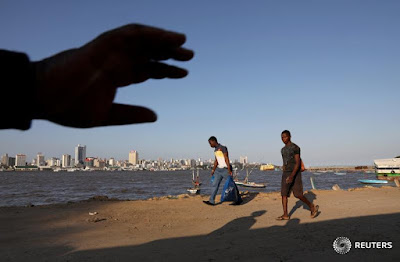 A hand of a local is seen as people returning from work walk along the beach, with the city skyline in the background ahead of pope Francis’ visit to Maputo, Mozambique, September 2, 2019.    REUTERS/Siphiwe Sibeko

Leading you from the foreground to the destroyed building in the rear of Mohamed al-Sayaghi’s picture is a medic, walking with his head bowed along a line of covered bodies. The shape of the clouds seems to burst back over the building like an echo of the blast that destroyed it. Mohamed has many other far more brutal images of dead bodies half covered and crushed in the rubble but none as poignant as this one. 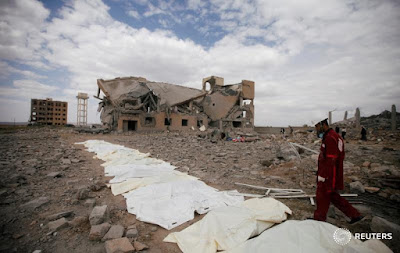 A Red Crescent medic walks next to bags containing the bodies of victims of Saudi-led airstrikes on a Houthi detention centre in Dhamar, Yemen, September 1, 2019.    REUTERS/Mohamed as-Sayaghi

Two things strike me as I look at Ali Owidha’s picture of the funeral in Yemen. The first is the symmetrical shape to it, the coffin bearers centered between the two lines of soldiers forming the guard of honour, only the lack of synchronization of the marching soldiers breaking the momentary mirror illusion. And the second, the position Ali must be in to take this picture. Take a moment to think what it takes to get yourself at this low angle, to take the picture and then leave without getting in the way (remember this is a military funeral) or being trampled on. 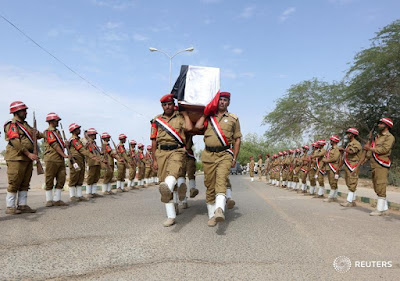 Honour guards carry the coffin of a Yemeni army officer killed in the southern province of Abyan in clashes with UAE-backed southern separatist forces, in Marib, Yemen, August 31, 2019.   REUTERS/Ali Owidha

Visually the World Economic Forum in Africa would not be on the top of your list for potential good news photography but Sumaya Hisham has worked hard to get herself into a position to shoot an intriguing image of a politician sitting in a chair. No matter how hard I look at it I can’t quite work out what is going on in the chaos of the right side of the image, or how the refection works. Normally too, showing eyes closed would kill an image as it gives the unfair impression that the politician is asleep, which they are not. In this case the closed eyes create a sense of considered calm around a swirl of visual chaos. 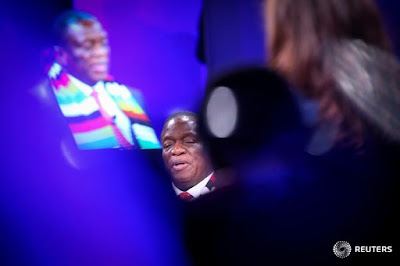 At first glance Aziz Taher’s picture looks two dimensional, almost abstract and quite painterly. Then the vehicle in the foreground snaps into focus and wow! you get the sense of scale. 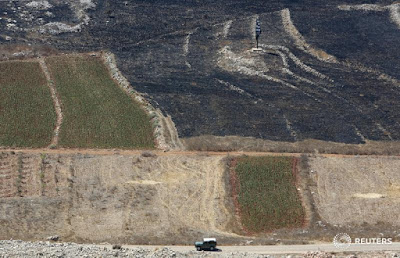 A view of burnt areas from Israeli shelling is seen in Maroun Al-Raz village, near the border with Israel, in southern Lebanon, September 2, 2019.    REUTERS/Aziz Taher

A stark line cuts through the landscape in Baz Ratner’s drone picture of deforestation in Madagascar. The curve of the road seems to sweep around to envelop the living trees, as though it’s leading the slow and unstoppable march of dead and burned tress to consume all that is living. Very sad. You can see the full story here. 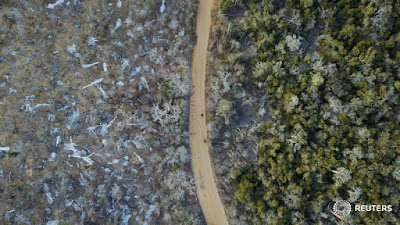 The xenophobic attacks in both South Africa and Nigeria are quite disturbing but I am really drawn to Siphiwe Sibeko’s well observed image of people making the most of a bad situation. The burned-out vehicle is being taken for scrap, like hunters taking home their kill. Bad for the vehicle owner but good for the surprise windfall of scrap metal for these dealers. A detail I really like is the backward glance of the man pulling the truck, his blue cap matching the colour of the roof and sign in the background. 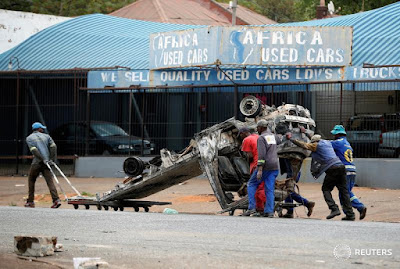 Mike Hutchings picture may have been taken in 2008 but it’s a fitting obit picture to mark the death of former Zimbabwe president Robert Mugabe. Love him or hate him, Mugabe was a powerful leader with global impact and Mike’s picture exudes that strength through the use of deep shadows and exposing for the highlights. It never ceases to amaze me what image defines a person’s life be they world famous or just known to family and friends. Everyone has an image of a person who has died in their mind’s eye. You can see the full obituary package here. 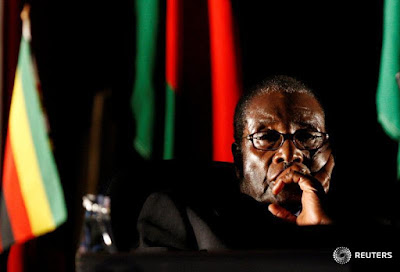 One does not associate Mozambique with cold damp weather but travelling photographer Yara Nadi has captured Pope Francis hunched up against the inclement conditions. What she has also captured is the warmth and energy of the people crowded in the background trying to get a glimpse of the pontiff. Look at each face - although they are bundled up against the weather - there is no mistaking that everyone is smiling. I would so love the blue W on the bottom right of the image to not be there - a distraction that you need to wrestle with – but the world is not perfect so I will have to live with it.  You can see more from the Pope’s visit to Mozambique here. 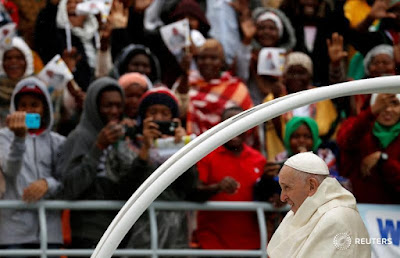