A Week in Pictures, Middle East and Africa, September 4, 2020

At first glance Sumaya Hisham’s picture of a woman looking through a portal hole of a police van looks like a photographic cut out. I can assure you it’s not, but it is a perfectly composed image where the curves of the mask and the edge of the eye liner fit exactly  into the circle. Even though she is masked and detained her eyes still transfix the viewer with determination and strength. 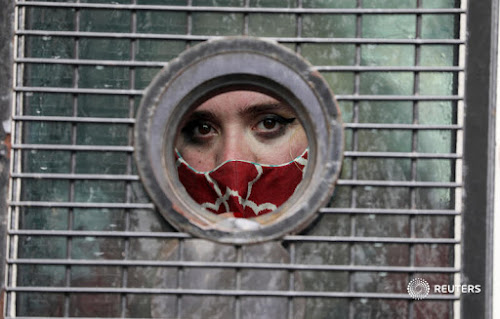 A woman is seen through the window of a police van after being detained during a protest against gender-based violence outside the parliament in Cape Town, South Africa, August 29, 2020. REUTERS/Sumaya Hisham

A peaceful and calm picture by Mike Hutching is a welcome break from the manic news file over the last few weeks. The cool blue tones and the slow shutter speed give it this feeling but if  we need a little warmth the zig-zag composition of the rocks lead us out through the picture to Table Mountain and the rising sun. 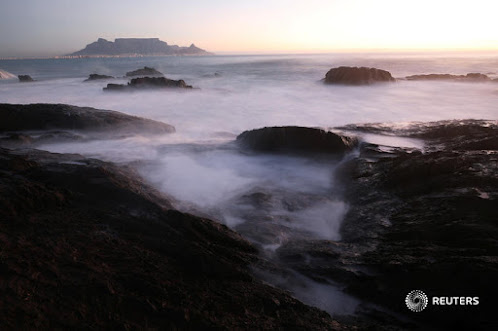 A small detail in a large space will always grab the eye. Add a wide difference in contrast and a splash of colour to really make a really arresting image. Mohammed Salem uses all these visual skills to draw us right in to the masked face peering into a darkened space.  It’s only the caption that informs us this is the scene of a deadly and sad house fire. 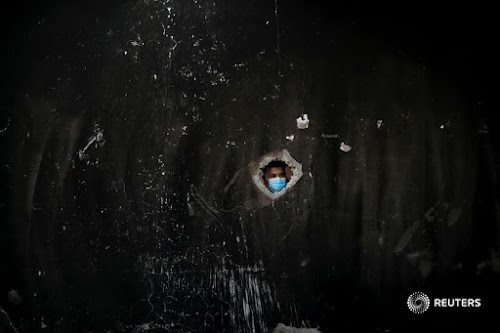 A Palestinian man wearing a protective face mask looks through a hole in a torched house where three children of Al-Hazeen family were killed in a fire ignited by a candle used to light up their room during a power cut in the central Gaza Strip September 2, 2020. REUTERS/Mohammed Salem

Raneen Sawafta’s picture feels more than a little claustrophobic and it takes a little bit of time to see what is really going on. First you see the boot, and it looks that it is about to crush the delicate and dust covered plant. You then spot the mechanics of a weapon and then finally a face pressed into the earth. 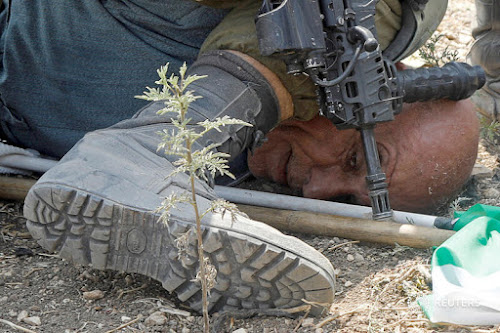 An Israeli soldier detains a Palestinian demonstrator during a protest against Jewish settlements in Jbarah village south of Tulkarm in the Israeli-occupied West Bank September 1, 2020. REUTERS/Raneen Sawafta

A simple illustrative picture by Nir Elias, the image that millions of people have shot on flights, but the importance of this is that it’s from the first flight from Israel to the UAE. The Star of David seen over these lands would have been almost impossible without this change of international policy and the move to normalise relations between the two countries. Read on here. 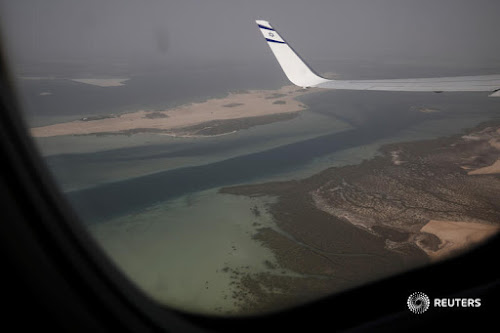 A view of is seen through the window of Israeli flag carrier El Al airliner carrying a delegation of Israeli and American officials before the plane lands in Abu Dhabi, United Arab Emirates August 31, 2020. REUTERS/Nir Elias

A gentle picture by Mohammed Salem that really caught my eye: I love the quirkiness of it as much as I like the colours. The back focus also to draw attention through the cool blues of the boy getting a hair cut in the foreground to the masked boy in red climbing the wall. Why he’s doing this we have no clue. Everyone is now masked as Gaza, previously free from COVID-19, is facing an outbreak and the numbers are spiraling. 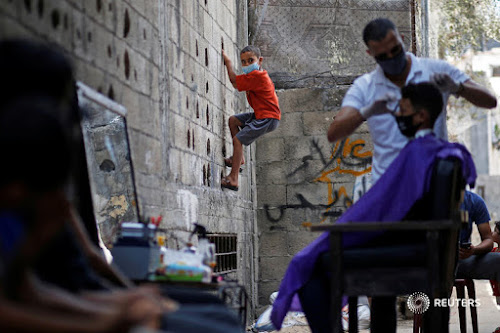 A Palestinian boy climbs a wall as he watches a barber on a street during a power cut and a lockdown following the outbreak of the coronavirus disease (COVID-19), in Gaza City August 31, 2020. REUTERS/Mohammed Salem

Bloodletting to this extent would often be part of a scene of an attack or a dreadful accident, but in Thaier al-Sudani’s picture it’s from the Ashura ceremony and all part of normal proceedings. Although the brightness of the red blood against the white clothing is quite striking and extends to the rear of the image, you need to take the time to look at the expression on the man’s face. Despite all the blood, there is no fear, no anguish and to me he looks quite relaxed. 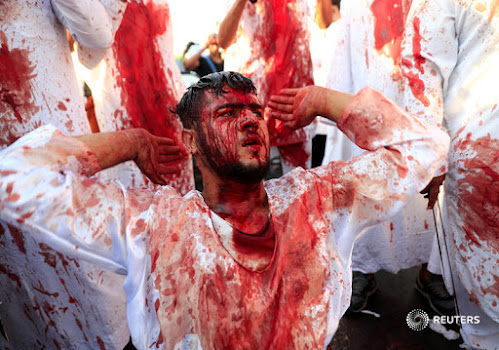 A Shi'ite Muslim man bleed after hitting his forehead with sword and beating themselves during a ceremony marking Ashura, the holiest day on the Shi'ite Muslim calendar, amid the spread of the coronavirus disease (COVID-19), in Baghdad, Iraq August 30, 2020. REUTERS/Thaier Al-Sudani

Also, part of the Ashura ceremony are re-enactments of the battle and very hard to resist this terrific picture by Alaa al-Marjani. Colour, heat, action and so much dust being thrown up as spectators watch the horses and riders from a hill. I can’t imagine what Alaa would not give for those rather annoying power lines not to be there, cutting across his picture, but hey, life is not perfect, so I will ignore them and enjoy. 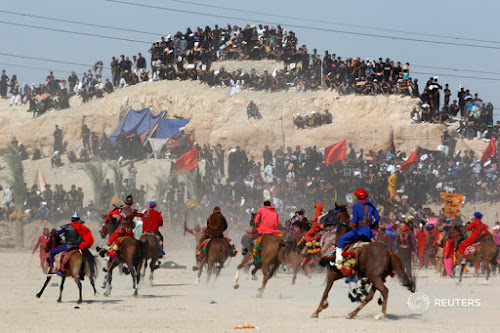 Iraqi Shi'ite Muslims ride horses as they re-enact a scene from the 7th century battle of Karbala to commemorate Ashura, the holiest day on the Shi'ite Muslim calendar, amid the spread of the coronavirus disease (COVID-19), in the holy city of Najaf, August 30, 2020. REUTERS/Alaa Al-Marjani

A clever use of a pale background image and a stroke of luck for Teba Sadiq as a man raises his cane to create a cris cross of compositional lines. The full range of tones from white to blacks with only the faintest of colour, pale yellow, set in graphic shapes also helps to make this very pleasing to the eye, that is, until you are jolted with the realisation that the image in the rear is that of a dead child. 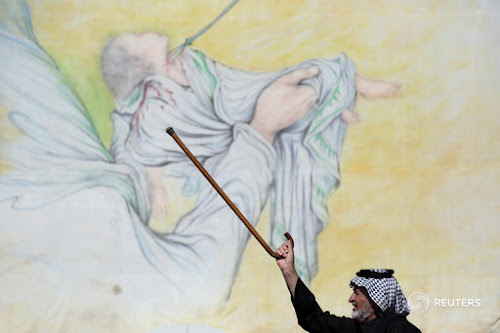 A Shi'ite pilgrim walks next to a drawing on the wall depicting a scene from the 7th century battle of Karbala, ahead of Ashura, the holiest day on the Shi'ite Muslim calendar, amid the spread of the coronavirus disease (COVID-19), in the holy city of Kerbala, Iraq, August 29, 2020. REUTERS/Teba Sadiq

Baz Ratner has taken the time to prepare an image he had in mind to illustrate the impact of flooding at Lake Baringo. A sort of live before and after or a “now you see now you don’t” picture. I think what made it  even more interesting is where the photograph has been cropped off at the top in the print version, is almost at the exact level of water in the live image. Read on here. 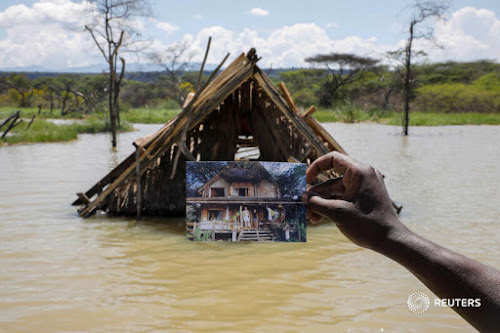 Camp manager, James Owuor, holds a photo showing a structure before it was submerged under rising water due to months of unusually heavy rains, in lake Baringo, Kenya, August 25, 2020. REUTERS/Baz Ratner

Here are a few highlights from the last two weeks –  I wanted to include these terrific images. 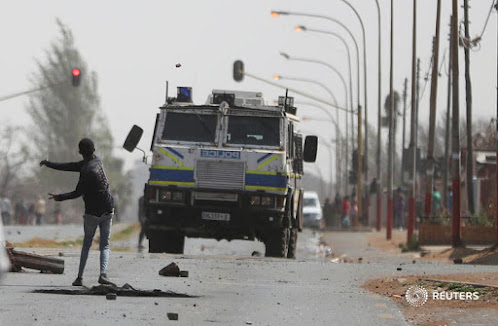 A man throws a stone at a police Inyala (armoured vehicle) during a protest demanding the police account for the death of the teenage boy who was allegedly shot by the police the previous night in Eldorado park, outside Johannesburg, South Africa August 27, 2020. REUTERS/Siphiwe Sibeko 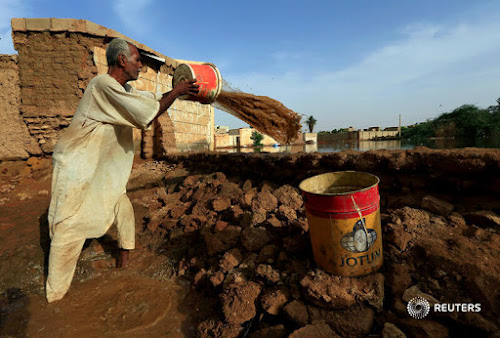 A resident pours out the waters of the Blue Nile floods within the Al-Ikmayr area of Omdurman in Khartoum, Sudan August 27, 2020. REUTERS/Mohamed Nureldin Abdallahya 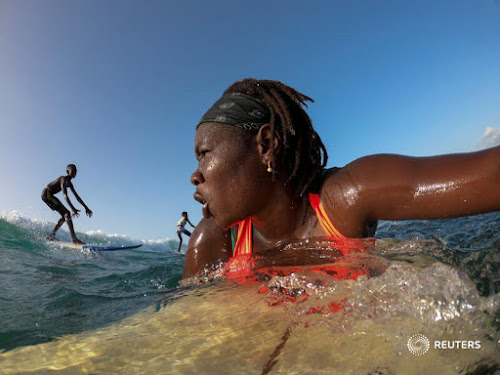 Khadjou Sambe, 25, Senegal's first female professional surfer, surfs during a training session off the coast of Ngor, Dakar, Senegal, August 18, 2020. "When I am in the water I feel something extraordinary, something special in my heart," said Sambe. REUTERS/Zohra Bensemra 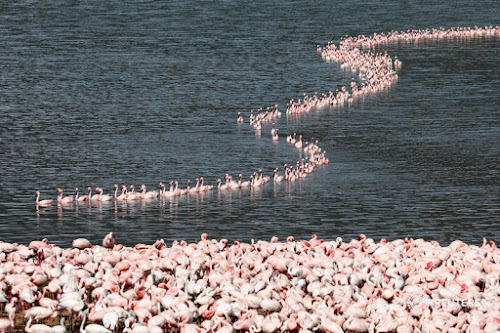 A flamboyance of flamingos crowds together in Lake Bogoria, in Baringo County, Kenya, August 26, 2020. REUTERS/Baz Ratner 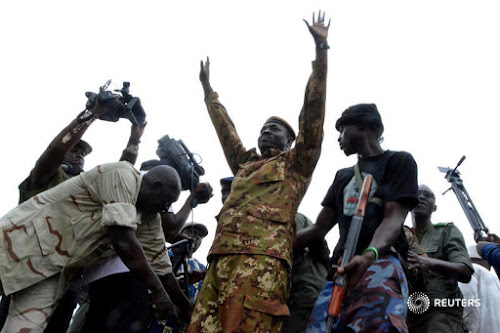 Colonel Modibo Kone, one of the junta leaders of the National Committee for the Salvation of the People (CNSP) which overthrew Mali's President Ibrahim Boubacar Keita, waves as he attends a mass rally to celebrate the coup at the Independence Square in Bamako, Mali, August 21, 2020. REUTERS/Mamadou Keita 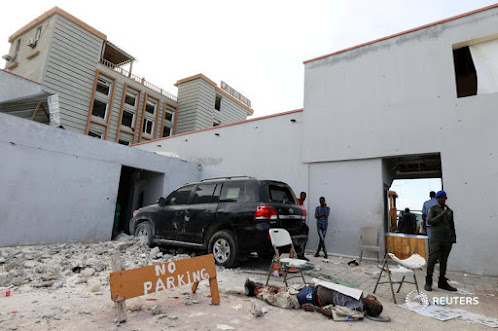 A body of a militant is seen at the scene of an attack at the Elite Hotel in Lido beach, in Mogadishu, Somalia August 17, 2020. REUTERS/Feisal Omar 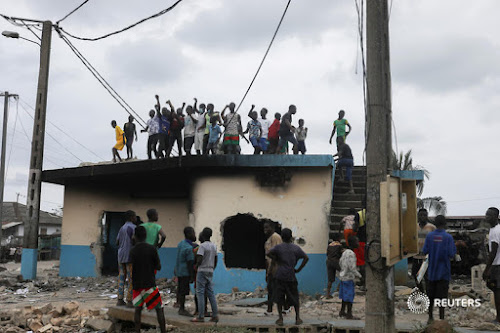 People are pictured on the roof of a police station set on fire by protesters during a demonstration against the decision of Ivory Coast President Alassane Ouattara to run for a third term in the next presidential election, in Bonoua, Ivory Coast August 14, 2020. REUTERS/Luc Gnago 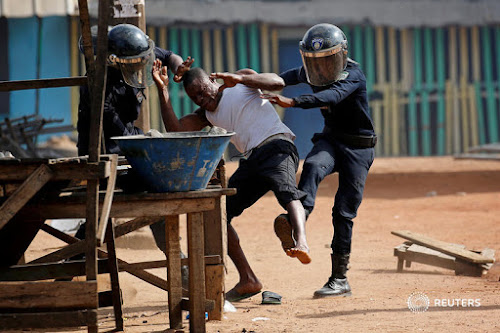 Policemen detain a demonstrator during a protest against president Alassane Ouattara's decision to stand for a third term, in Abidjan, Ivory Coast, August 13, 2020. REUTERS/Luc Gnago 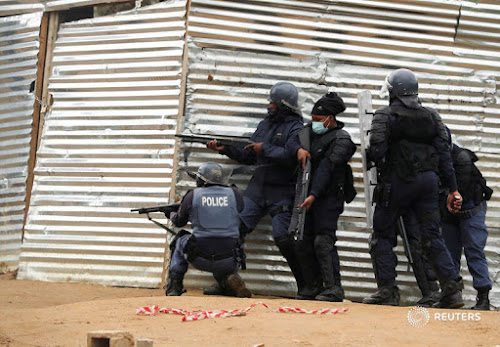 Police take cover as they are pelted with stones during a protest against racial and economic inequalities in Kayamandi township near Stellenbosch, South Africa, August 12, 2020. REUTERS/Mike Hutchings 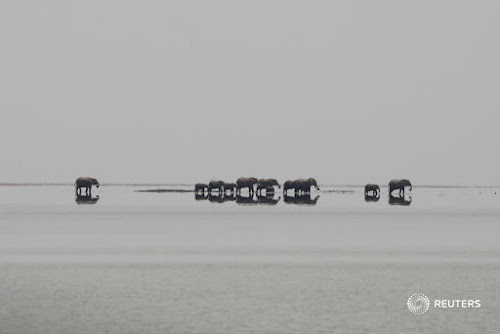 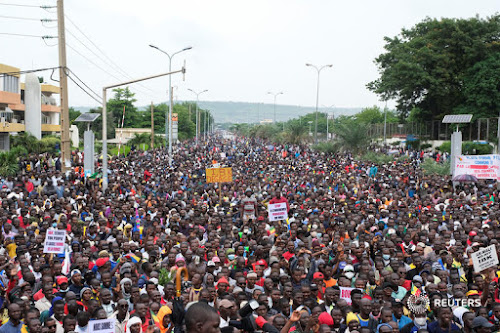 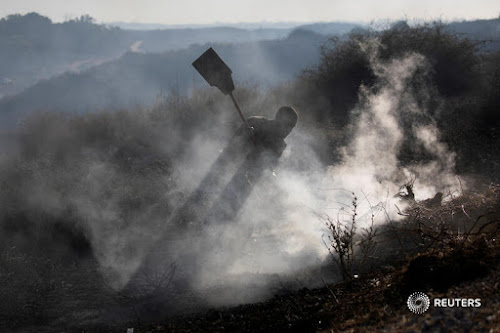 An Israeli soldier beats down smoke with a fire broom in an area that has seen blazes caused by fire balloons launched from the Palestinian enclave of Gaza, near Kibbutz Nir Am on the Israeli side of the border between Israel and the Gaza Strip August 17, 2020. Picture taken August 17, 2020. REUTERS/Amir Cohen 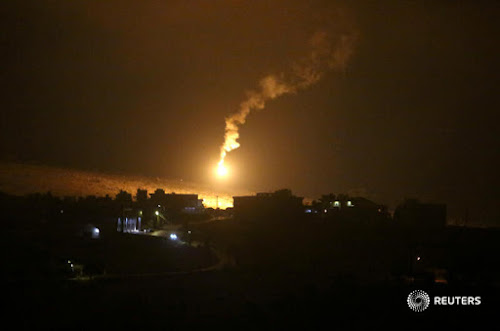 Smoke and flare are seen in the sky, as pictured from Houla village near the Lebanese-Israeli border, in southern Lebanon, August 25, 2020. REUTERS/Aziz Taher 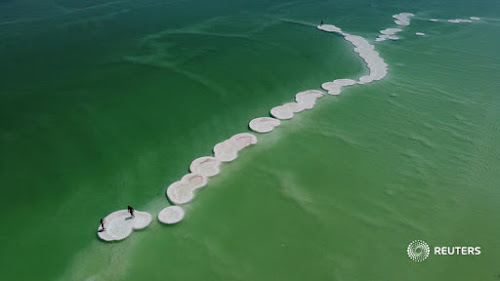 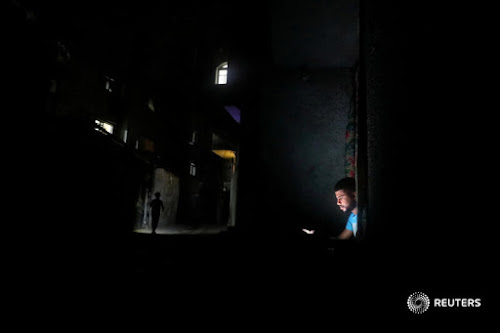 A Palestinian man uses his mobile phone as he sits at the doorsteps of his home on a hot day during a power cut after Gaza's lone power plant shut down amid tension with Israel, in Jabalia refugee camp, in the northern Gaza Strip August 23, 2020. Picture taken August 23, 2020. REUTERS/Mohammed Salem 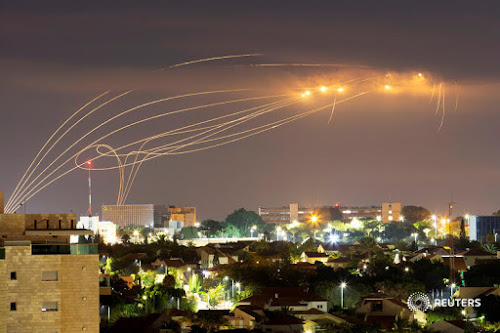 The Iron Dome anti-missile system fires interception missiles as rockets are launched from Gaza towards Israel, as seen from the city of Ashkelon, Israel, August 21, 2020. REUTERS/Amir Cohen 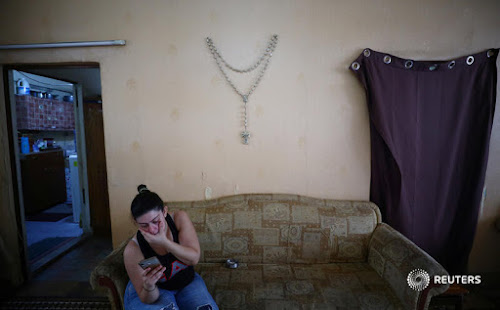 Rita Faraj Oghlo, 31, looks at her phone in her mother’s house after her family were forced to live there because their home was damaged in the Beirut port blast in Beirut, Lebanon, August 13, 2020. REUTERS/Hannah McKay 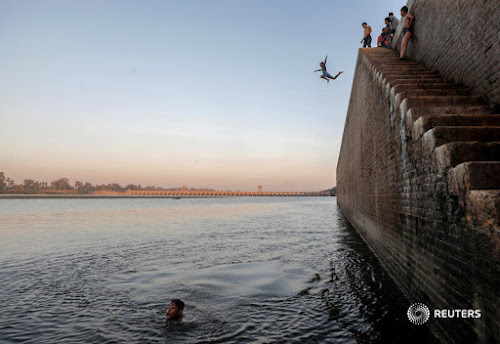 A boy jumps in the Nile River during hot weather on the outskirts of Cairo, following the outbreak of the coronavirus disease (COVID-19), Egypt August 18, 2020. REUTERS/Mohamed Abd El Ghany 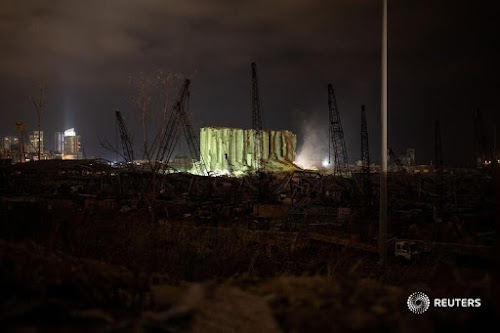