What great shape and composition in Mohamad Torokman’s striking image. The circle of solid black smoke is punctured by the streak of tear gas being thrown back, visually helping the composition as it’s almost aimed into the very top left corner of the frame. The heavy pale grey smoke of the gas forms a backdrop for the perfectly framed and silhouetted figure who is in profile, so we clearly see he is wearing a gas mask. 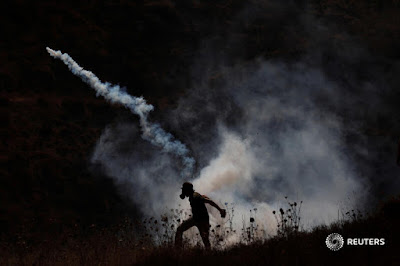 A Palestinian demonstrator returns a tear gas canister fired by Israeli troops during protest against Jewish settlements and normalizing ties with Israel, in Asira al-Qibliya in the Israeli-occupied West Bank September 18, 2020. REUTERS/Mohamad Torokman

It takes a little time to get to grips with the scale of Ronen Zvulun’s picture until you see the tiny figures bottom right. It’s then you begin to get a sense of the stone wall and the battlements, finally picking out more figures placed centrally. This might be because you are visually preoccupied with bright colours set against the solid slab of black of the sky. 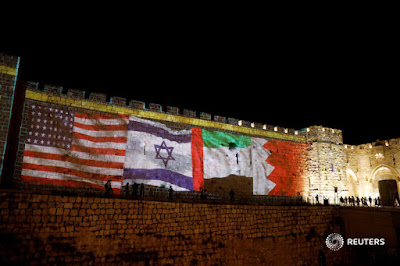 What a powerfully sad picture from Alaa al-Marjani. A complex composition as the scene appears divided in two. On the left we have two people, completely unprotected against any disease lowering a wrapped and exhumed body into a rough coffin. And on the right, a figure seemingly divorced from the activity, sitting at rest barefoot in the sand, looking as if nothing out of the ordinary is happening. Maybe for him this is nothing out of the ordinary? Read on here. 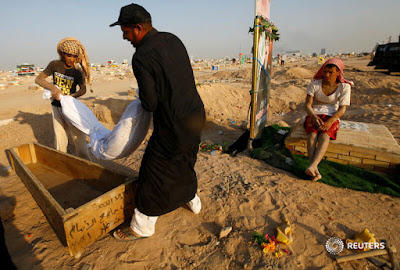 Iraqi men carry the corpse of a man who, according to his relatives, died of the coronavirus disease (COVID-19), after they dug it up to be transferred to the "Valley of Peace" cemetery on the outskirts of the holy city of Najaf, Iraq September 12, 2020. Picture taken September 12, 2020. REUTERS/Alaa Al-Marjani

Hamad I Mohammed’s picture intrigues us as it appears that hands, arms and heads are in danger of being severed by what momentarily looks like a steel medical chopping device, sliding back and forth. The sense of discomfort is added to by the expression of the man’s face and doubled by the reflection. The sense of a machine is suggested by the sharp lines of the window, the cold tones of the blues and whites, and the concrete walls. 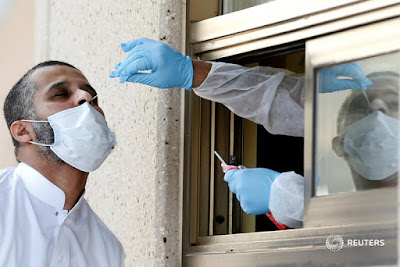 A Saudi national travelling into Bahrain gets a nose swab at an immigration checkpoint on the King Fahd Causeway that reopened after coronavirus disease (COVID-19) restrictions were eased, at the Bahrain-Saudi border, Bahrain, September 15, 2020. REUTERS/Hamad I Mohammed

A simple detail picture from Mohammed Salem works well because it’s set against a clean background as a hand reaches in to take the small bird from a net it’s captured in. What is important is that the bird’s beak is in profile, and the eye, legs and feet are clearly seen. Without these tiny details we’d lose the sense of this being a trapped bird. 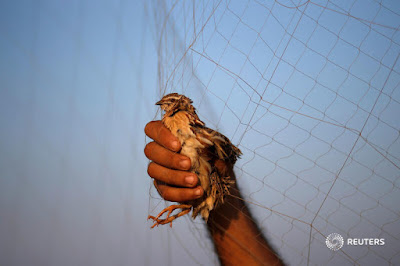 A Palestinian man takes out a quail from a net after catching it in the central Gaza Strip September 14, 2020. REUTERS/Mohammed Salem

Even though Yaman Al Shaar has shot her picture quite wide you still get the powerful feeling of care, concern and nervousness as the children help each other to sanitise their hands on returning to school. The scene is taking place under the watchful eye of the teacher and portraits of Syrian President Bashar al-Assad. 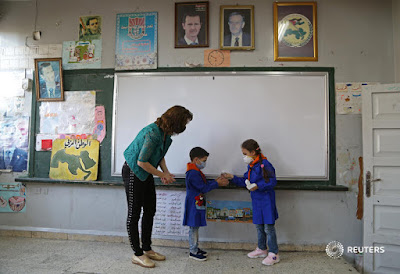 A student sanitizes the hands of her classmate in a classroom as a school year kicks off amid concerns about the spread of the coronavirus disease (C0VID-19), in Damascus, Syria September 13, 2020. REUTERS/Yamam Al Shaar

I don’t think there is any way you can look at Amr Abdullah Dalsh’s picture without feeling a smile creep across your lips. Pushing aside the thought of the possible dreadful smell of the camel’s breath the question you might ask yourself, would this picture work better cropped tighter? If the camel’s eye was cropped out, you’d get more teeth and a closer look at the man’s expression, or left wider to leave more of the man’s ear and a better shape to include the curve of his head? It’s one of those pictures no matter how you crop it, or no matter how long it took to be finally published, it will work. Read on here. 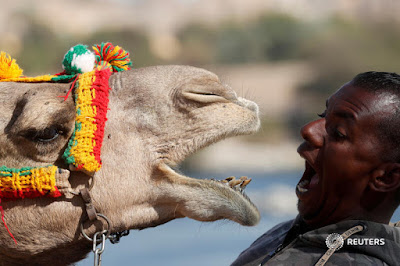 Hossam Nasser, 32, plays with his camel "Anter" in front of his house in the Nubian village of Gharb Soheil, on the west bank of the Nile river in Aswan, Egypt February 19, 2020. REUTERS/Amr Abdallah Dalsh

Equally satisfying from Amr Abdullah Dalsh is the carefully composed, quiet and cool toned image from the same story. I love the visual game that Amr has played as he waited for the cat to walk into the door space, its front legs at a perfect inverted V, towards the waiting arms of the Nile God Hapi. Without the cat no picture. 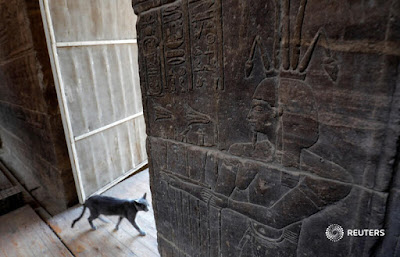 A subtle and quiet picture from Amir Cohen to illustrate people preparing for lockdown in Israel. I am not a fan of silhouette pictures, but this really is a step above most as you get real sense of a pensive atmosphere. You are drawn into the rear of the picture and guided visually by the flags to the couple heading off into the backlight. A vertical line drawn between the flags bisects the space leading you down to the couple. If you take the time to think about the lockdown, you might get the sense that they are heading off into an uncertain future, or if you are more pragmatic with your thoughts, they could be heading home with the week’s food shopping. Read on here. 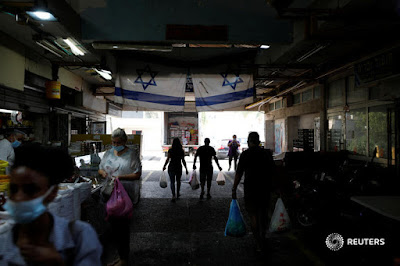 Israelis shop at the market before Israel will enter a second nationwide lockdown amid a resurgence in new coronavirus disease (COVID-19) cases, forcing residents to stay mostly at home during the Jewish high-holiday season, in Ashdod, Israel September 18, 2020. REUTERS/Amir Cohen