It appears to the rest of the world that Kenya is struggling as the two main political parties wrestle for power in the lead-up to a second election after the first was declared void. Baz Ratner’s pictures of a plus size fashion show was a visual antidote to the daily diet of bloody street clashes. There is sheer joy on the faces of the women as they walk the catwalk in the latest Kenya fashions. I love how the light of the show changes from a cool blue on the right to hot reds on the left and you can almost hear the booming music. 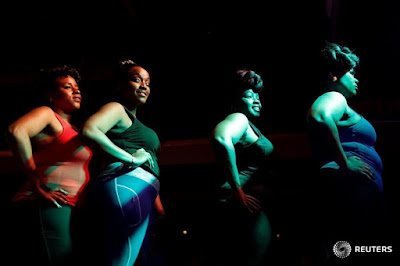 Models pose on the catwalk during a plus size fashion show in Nairobi, Kenya October 7, 2017.   REUTERS/Baz Ratner

If ever a picture needed the health and safety warning “don’t try this at home”, it must surely be Mohamed Abd El Ghany’s picture of Egyptian fans celebrating their team qualifying for the 2018 Word Cup Finals. You can image the conversation moments before ‘I’ve got an idea, let’s all spray flammable gases into the air in a crowd and set fire to it’. A bad idea resulting in a great picture. 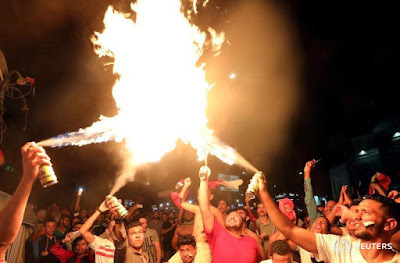 Libya-based photographer Hani Amara’s picture of migrants sent a chill down my spine. At first, all we see is dozens of people sitting in perfect rows in a fenced-off area. Then we notice that more people are joining their ranks on the right, peeling off in strict order. What we can’t see is how many more will join, but I get the sense that this line of human tragedy is endless. 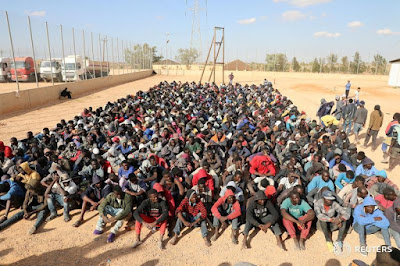 Migrants sit at a detention centre in Gharyan, Libya, October 12, 2017.

Even though Abdullah Dhiaa Al-deen’s picture was taken last August it was only published this week and so it qualifies to be included in pictures of the week (I set the rules anyway and they are there to be bent.) Abdullah worked on this in-depth story for weeks, and from the whole series I like this image the most. To me the calm and beauty of the scene seems as timeless as the turban is long. The delicate material held by the men draws you slowly into the picture towards the graceful arches, the eye pausing to take in the complexity of the floor’s design. The whole picture story, published on the Wider Image that can be seen here. 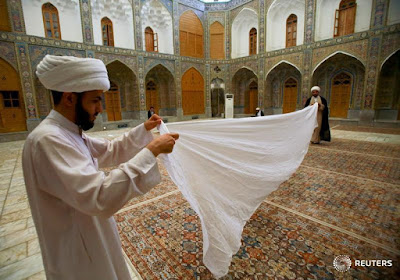 A Shi’ite cleric holds a turban at al-sayed al-Yazdo school run by al-Hawza al-Ilmiyya in Najaf, Iraq August 12, 2017. For more than 1000 years the al-Hawza al-Ilmiyya in southern Baghdad has been giving religious instructions to thousands of Shi’ite Muslims to help them become clerics.   REUTERS/ Abdullah Dhiaa Al-deen

Most of the time I believe that a picture has a natural crop, which might be captured by the camera in the purist Cartier Bresson sense or might need to be cropped by an editor with an eye to bringing out the best. On rare occasions some pictures just need to be seen in two different ways. Baz Ratner’s image is one of these. You immediately ask yourself ‘what is going on here?’ Cropped wide you see a man in a car consumed by white gas, the colour of which matches the paintwork. The car, the man’s face and arms and the eerie shadow on the side all add to the bizarre nature of the image. But then you want to see the man’s face, with his eyes seeming to pop out of his head as he tries to escape the smoke, his hands flailing about. You choose which you prefer.  You can read the back story to Baz’s picture here. 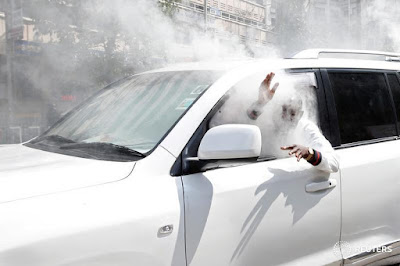 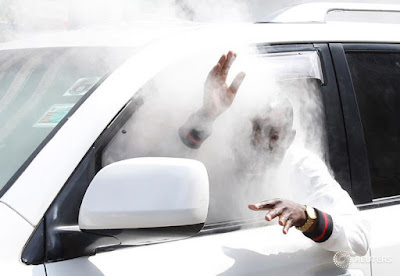 An opposition politician of the National Super Alliance (NASA) coalition, reacts after a gas canister fired by police hits his car during a protest along a street in Nairobi, Kenya October 13, 2017.  REUTERS/Baz Ratner

Often the strongest pictures are made when objects are seen out of their usual context; a boat balanced on a building after a storm, a Rolls Royce in a swimming pool (it’s only Rock and Roll) and in this case Ange Aboa’s picture of a plane in the sea. What makes this picture even stronger is that the rescue is still going on. The man on the right of the picture desperately seems to call the viewer into the image to help with the rescue. The waves batter the stricken plane and crash in left to right, hampering the rescue. The wind so strong you can almost taste the salt water mixed with the spilled fuel of the plane. 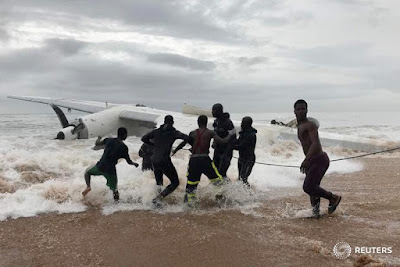 People pull the wreckage of a propeller-engine cargo plane after it crashed into the sea near the international airport in Abidjan, Ivory Coast October 14, 2017.    REUTERS/Ange Aboa

Photographing a deadly bomb attack in Mogadishu is never easy. The constant danger of a secondary device targeting rescue workers and the fear that there may be a follow-up gunman attack means that you always have to be super careful. You also have to be mindful that you don’t produce pictures of such horror and gore that they are just un-publishable. Feisal Omar not only portrays the devastation of the scene -- fire, smoke, burning vehicles, wreckage and men carrying weapons -- but he also captures the human element of rescue and survival as the armed men carry the injured to safety. A very powerful news image. 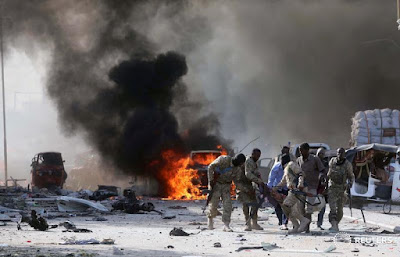 Somali Armed Forces evacuate their injured colleague from the scene of an explosion in KM4 Street in the Hodan district of Mogadishu, Somalia, October 14, 2017.   REUTERS/Feisal Omar

The simple oval composition to Thierry Gouegnon’s picture, aided by a pointing hand, draws you into the writing in the sand.  Immediately you are intrigued; what is going on and what is causing such intense scrutiny? A game of chance? A plan for some event? Nope, the Liberia election results as they are announced on the radio. A fantastic picture that to me sums up the struggles and hopes of one of the world’s poorest nations as they go to the polls. 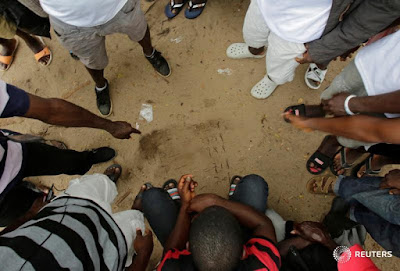