A last minute update to the week's selection from Middle East and Africa of Luc Gnago's wonderfully composed picture using classic thirds and complementary colours of orange and blue. The picture of the tree against the blue sky on the orange earth would have been nice enough but three girls walking from left to right, all equally spaced in line, one, two, three or A, B C to fill the space perfectly make this image just a little bit special. 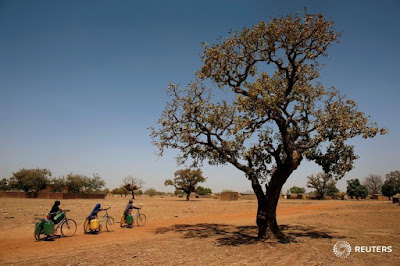 Girls carry water on their bicycles at a dispensary in Nedago village near Ouagadougou, Burkina faso, February 16, 2018.   REUTERS/Luc Gnago

A series of air raids by the Israeli Air force and anti-aircraft counter attacks by Syrian forces prompted a quick response by Ammar Awad, who headed to the Golan Heights. The main questions at this time were: ‘Whose move and what happens next?’Ammar’s picture of the signpost, the waiting woman and the cut-out figure of a gunman sum up the moment of watching and waiting. 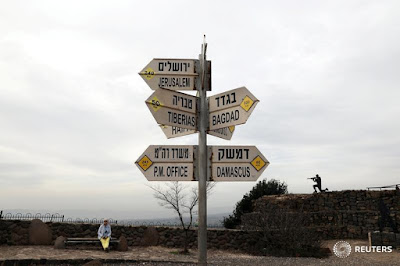 A woman sits near a sign at Mount Bental, an observation post in the Israeli-occupied Golan Heights that overlooks the Syrian side of the Quneitra crossing, Israel February 10, 2018. REUTERS/ Ammar Awad


If the cut-out of the gunman in Ammar's picture above is classic in its shape, I think Baz Ratner's running boy is another classic. The boy's legs are almost at full stretch, his arms are clearly defined, and water is splashing up behind. It is an irresistible pick for the week. 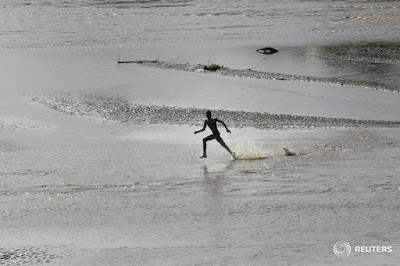 Satish Kumar’s picture is a wonderful combination of busy line and shape through shadow and structure. There are too many triangles to count as your eye races to the world’s tallest building, the Burj Khalifa, in the middle distance to the tiny shape formed between the hands of the woman taking a picture of her friend. 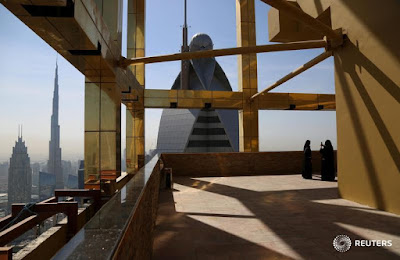 A visitor takes photos at the 71st floor of the Gevora Hotel, the world's tallest hotel, in Dubai, UAE February 12, 2018. REUTERS/Satish Kumar


The eerie cold blue light from a mobile device highlights the face of the fighter in a room bathed in the warm glow of firelight, creating an almost theatrical scene in Khalil Ashawi’s terrific picture. Shadows flickering in the light on the wall soften the unmistakable shape of his weapon in the background. At the same time the fighter’s covered features are frozen like ice in the harsh blue light. 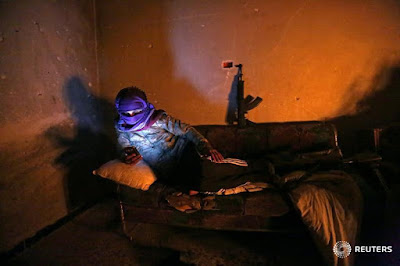 
Faded glory has got to be the understatement of the week to describe Amr Abdullah Dalsh’s picture. The colours are muted, every poster is torn or faded and the piles of rubbish look as if they have been there for years and will be there for years to come. I can’t imagine for a minute what these men are talking about, but I sense they are in no hurry to finish their conversation. I think this is a wonderful and timeless picture. 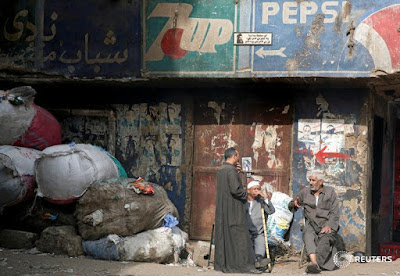 An Egyptian man waits in front of Pepsi products shop for customers at the shanty area Zabaleen or "Garbage City", the poorest part of Cairo, where thousands of Copts make a living by recycling everything from plastic bottles, food remains, carton and metal on the Mokattam Hills in eastern Cairo, Egypt February 12, 2018. REUTERS/Amr Abdallah Dalsh


On the day police recommended that Netanyahu should be indicted for bribery, Nir Elias had a lucky break with the light as the prime minister walked into the spotlight. An inch lower and his eyes would be in shadow and the essence of the picture would have been lost. What also makes this picture for me is the fact that the sliver of light ends in black shadow on both sides of the frame, suggesting a momentary glimpse of something going on. 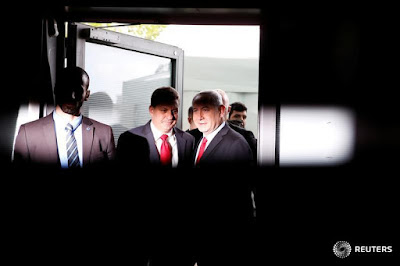 
In Bassam Khabieh’s picture, the boy’s arm and his cheek echo the shape of the Red Crescent logo. The circles of the emblem are also echoed in the wheels of the bike and the truck, all combining to make a very complicated composition. There is there is no telling if this boy is holding his head in relief because supplies have reached Douma, or in concern that it’s not enough. But either way, I think the tension in his locked fingers tells a story of concern. 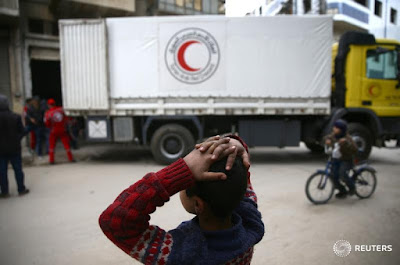 
A sea of faces stretching to the furthest horizon, with people’s arms crossed in unison, makes Tiksa Negri’s picture quite striking. The only break in the flow to the rear of the picture is a single flag being waved. I can almost taste the dust being thrown up by these thousands of people. 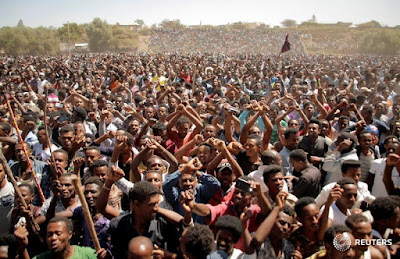 A surprise press conference late in the evening by South African President Zuma gave Siphiwe Sibeko access to a historical moment. On the face of it, a simple assignment -- man speaks at podium to announce his resignation – but it’s much harder to make it something special. Throw in strong light and a long shadow and you have a special moment well captured by Siphiwe. I have added a second picture that was well used and which demonstrates that ‘bread and butter’ pictures are as important as thoughtful, creative images. Think too about the caption as we edit this live. Zuma arrives as president, all smiles, and we don’t know what he is going to say. At the end of his address he announces his resignation and leaves press conference as a former president. 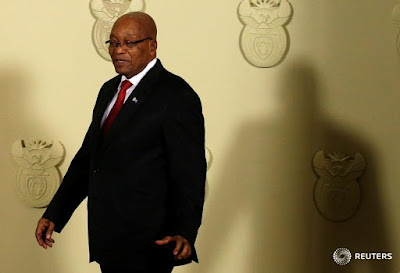 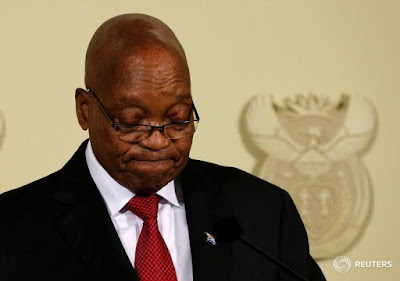