In the confusion of claims that Boko Haram had kidnapped over 100 teenage school girls and counter claims that the military had rescued them Photographer Afolabi Sotunde was assigned to find out what had actually happened. The scene he was met with was scared people coming back in from the bush who has escaped the attack, empty class rooms, weeping relatives and for me most poignantly a single lost pair of slippers (flip flops) left in the sand. Catch up with the ongoing story here. 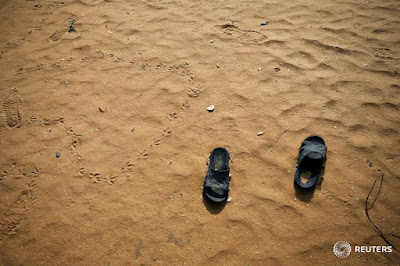 Abandoned slippers in left in the sand of the school compound in Dapchi in the northeastern state of Yobe, Nigeria, February 23, 2018 where dozens of girls went missing after an attack on the village suspected to have been carried out by Boko Haram.  REUTERS/Afolabi Sotunde

After spending weeks shooting the looming drought in Cape Town, Mike Hutching’s in-depth story has finally been published. It was hard to choose a single image, but for me a lone figure, carrying a water container and squeezed between the shadows seems to sum up the situation, or maybe a lucky escape. Day Zero, when the taps in Cape Town will be turned off, has been put back from mid April to mid July. Maybe if the rains come and the reservoirs are replenished,   the city will have a lucky escape too. I fear that in the long term there is no escape from water shortage. His whole picture story, with some amazing drone footage, can be seen here. 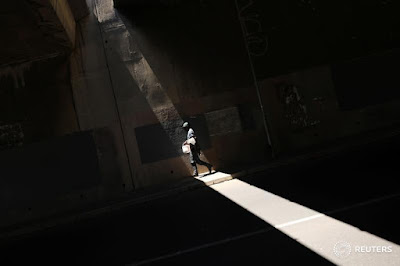 
Helping hands reach up as the body of dead Palestinian teenager Abdullah Abu Shekhah is lowered into his grave in Ibraheem Abu Mustafa’s frantic and distressing picture. It looks like Death himself is taking another soul as mourners gather to take a last look at their relative or friend. The gentle touch of a hand on the young man’s face is a calm moment in the eye of a storm in this powerful picture. 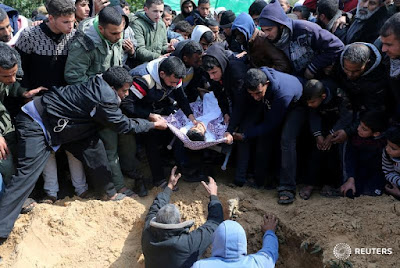 With uncomfortable similarities to Ibraheem’s image above, there is no mistaking the desperation in a storm of violence in Bassam Khabieh’s picture from Ghouta. But this time, instead of the helping hands lowering a dead man into his last resting place, a living but unconscious woman is lifted up from a shelter that looks like a concrete grave to what we hope is relative safety. More pictures here. 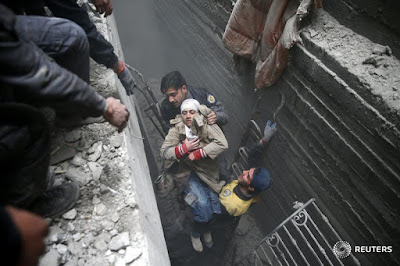 Civil defence help an unconscious woman from a shelter in the besieged town of Douma in eastern Ghouta in Damascus, Syria, February 22, 2018. REUTERS/Bassam Khabieh

Recent changes in Zimbabwe’s politics have been, to say the least, rapid. Photographer Philimon Bulawayo’s carefully positioned and composed picture of Nelson Chamisa seems to have the full political weight of Morgan Tsvangirai bearing down at him, even at his funeral. The small sliver of black background by the side of Chamisa’s face is so important to make this image work. 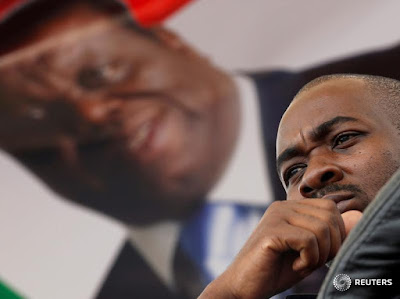 Nelson Chamisa, the new leader for Movement For Democratic Change (MDC), looks on during the funeral parade of Morgan Tsvangirai in Harare, Zimbabwe February 19, 2018. REUTERS/Philimon Bulawayo

James Akena’s picture has a somewhat clumsy composition. The boy on the left is walking out of the frame, the bush on the right should either be completely in the frame or cropped out, and the child in yellow is a little distracting. But I really like this picture for two reasons: the children being held so tightly by the adults to ensure they are not lost, and the objects being carried by the equally spaced figures. Bucket for water, child and, probably, all the worldly goods the family could flee the conflict with. 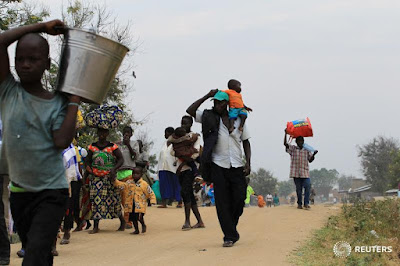 Congolese family, who migrated from Democratic Republic of Congo by fleeing on a boat across Lake Albert, arrives in Ntoroko, Uganda February 17, 2018. REUTERS/James Akena

I can’t help thinking about two things when I look at Khalil Ashawi’s picture of resting troops. First, just how well the camouflage actually works. It takes a while to see all five exhausted soldiers. And then, bizarrely, I am put mind of the trolls turned to stone in JRR Tolkien’s book The Hobbit. Maybe it’s the grey rock behind the resting figures and the light coming in from the back of the picture through the trees. 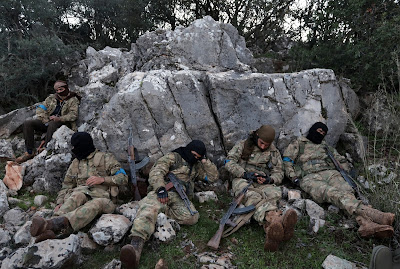 Taking full advantage of the warm evening light, long shadows and classic thirds with his ‘environmental portrait’ of two spacemen, Ronen Zvulun manages to make us believe, if only momentarily, that we are on the surface of an alien  planet. I can’t quite my head around the notion that dressing up in a space suit and walking around in the desert constitute simulating a mission to Mars, but who am I judge. Judge for yourself here 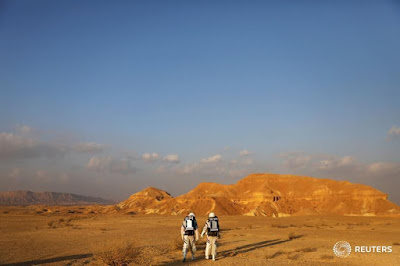 There was no way that James Akena would fail to shoot great pictures at a hydroelectric construction project in Uganda and he didn’t disappoint. A lone figure in a cavernous underground tunnel is dwarfed by waves of light that shift from darkest blacks to golden yellow in shapes that emulate the water that will rush through this shaft. It makes for an irresistible image. 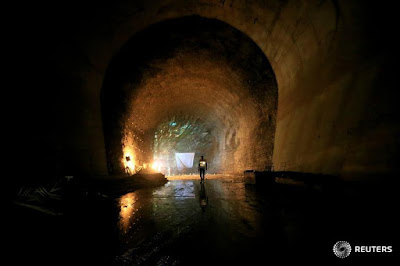 A contractor walks in a tunnel at the construction site at Karuma 600 megawatts hydroelectric power project under construction on River Nile, Uganda February 20, 2018.   REUTERS/James Akena

It’s not often you get to see an elephant suspended upside down by its feet, but Thomas Mukoya’s picture delights us with just that. Ears flopping like Disney’s Dumbo, and a ranger holding the elephant’s tail, are watched by a small crowd that has gathered. The clouds in the sky complete the scene as if they had been drawn to order by a Disney animator. The whole story here. 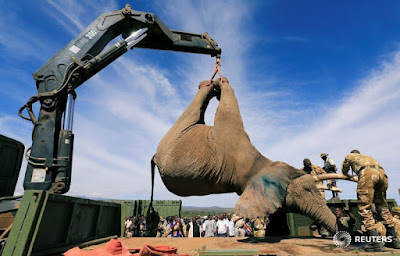 The worn climbing holds in Zohra Bensemra's picture take a little time to see. The eye is first drawn to the strong blacks of the window and the doorway, then to the child dangling from the window. What is going on? Only the caption can explain. This is a great example of how a mysterious picture draws us into a sequence of images because we just have to know more. All is revealed here 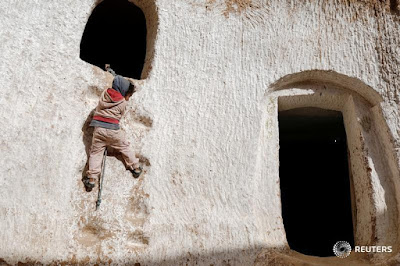 Ahlem, four, climbs up a wall to reach her rabbit's hideaway at her troglodyte house on the outskirts of Matmata, Tunisia, February 5, 2018. REUTERS/Zohra Bensemra